Over the past week, the Lakers' social media has been flooded with content ranging from LeBron James practicing in a Lobos-branded headband, Anthony Davis placing large bets at a blackjack table in Temecula, and media day head shots of yet another brand-new supporting cast around the Lakers’ superstars. We even a 2nd edition of the "360" photo of AD, LeBron, and yes - Russell Westbrook. Despite a summer of public finger-pointing, firing his agent, and constant trade rumors, Russ is still a Laker.

This summer feels like icing on a metaphorical cake of organizational dysfunction that has been baking since the Lakers traded multiple assets to acquire Westbrook. It’s a tough sell to a fanbase that spent the offseason commiserating the failures of the past season and filling their camera roll with screenshots of fake Westbrook trades they cooked up to correct said failures. Even as recently as this morning, October 3rd, the day of their first game, we got a detailed report of the current state of Westbrook negotiations between the Lakers and Pacers from The Athletic. There may soon come a day when Lakers fans can finally put down the trade machine, but today is not that day. Despite all of that, the Lakers - Russell Westbrook included - play an actual basketball game tonight. I want to examine the ways that Russ and the staff can set him, and the Lakers, up for success.

To start, I attempted to make a list of things Russ is good at:

Say what you want about his decline, Russ can still do all that at an elite level! Okay, but seriously, I’ll get to those glaringly unproductive tendencies in his game in a bit. The actual list I came up with looked like this.

I’ll admit, I took some liberties with that last item since this skill is purely theoretical and seldom put into practice by Russ, but I am hopeful we see more of it this season.

Ham has been installing 4-out-1-in spacing principles on offense (see below) that should allow for the Lakers to run effective offensive sets and have better spacing and driving lanes than what we have seen in the past. Russ will likely be asked to play in all different areas of the floor in this offense, and I think there are lineups that the staff can deploy him in that will be successful on offense. 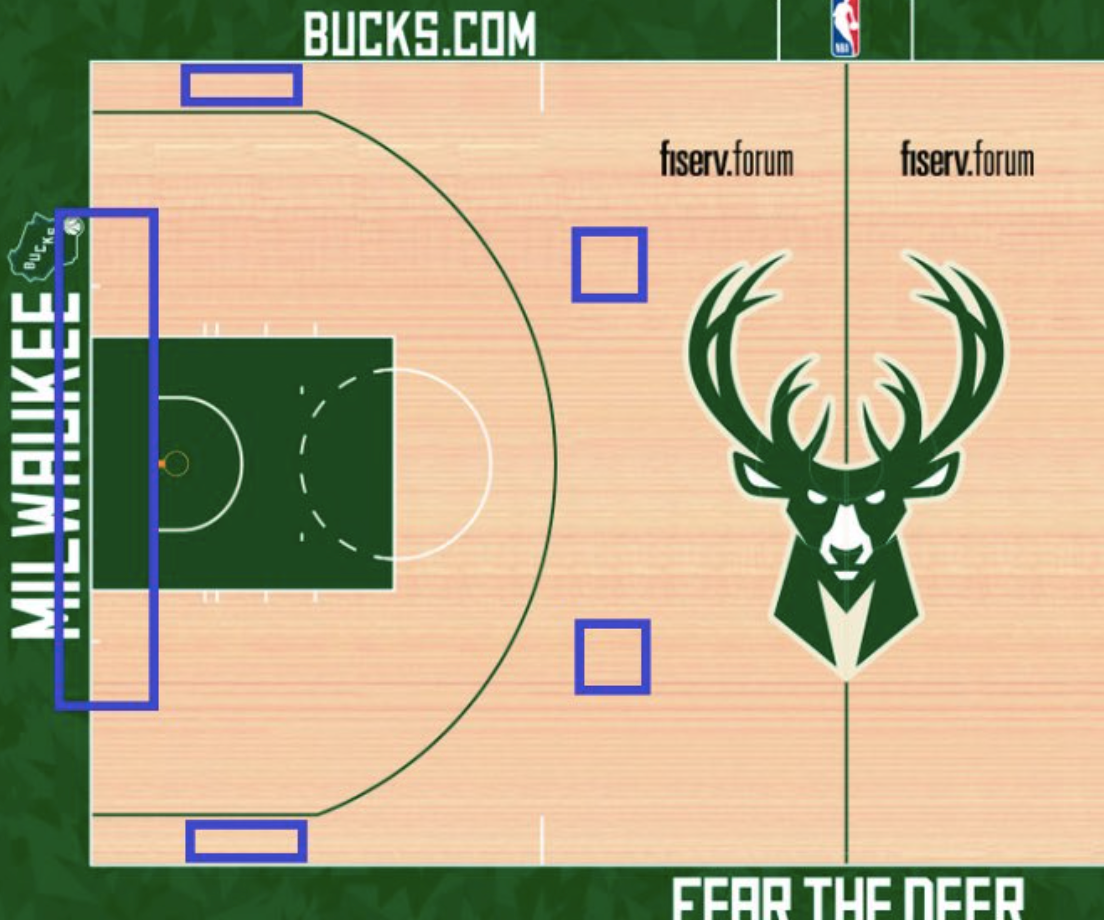 Russ in the Corner

Yes, you read that correctly. No, it is not referring to a corner of the locker room. I think there are ways Russ can be effective on offense operating out of the corner. I want to refer back to the lists above. There are certain things on offense we most definitely do not want Russ to do; taking low-efficiency shots and turning the ball over are among those. This simplifies Russ’s role on offense, as he would not be asked to initiate the offense, nor spend time with the ball in his hands. Russ could excel as a cutter along the baseline when defenses overplay the drives of rim-seeking playmakers such as LeBron and Dennis Schroder. When given the option, defenses will bend away from Russ in favor of loading up against LeBron and Anthony Davis. If Westbrook is engaged and committed to being active off the ball, he should be able to generate plenty of open layups for himself, or crafty dump-offs (something that Russ is quite good at) to talented finishers like AD who converted on 80% of his shots in the restricted area last season, Damian Jones (88% on such shots), and Thomas Bryant (75%). I would be remiss to not mention that Westbrook himself shot a respectable 43% and 44% from corner 3PA over the past 2 seasons, respectively. He would need to sustain some semblance of this type of production for a period of time in his new role before we take this too seriously, though.

Let’s talk about Russ the rebounder. It is probably the area of his game where he excels the most relative to his peers, as he is arguably his best rebounding guard of all time. Crashing the offensive boards against favorable matchups could also result in easy putbacks and easier shots for teammates against scrambled defenses. Take a look at how PJ Tucker did this for a Darvin-Ham-coached Bucks team crashing from the corner and fighting for position in the dunker’s spot. https://www.youtube.com/watch?v=dqbkFrV9AOs

In a series of a few short clips from an intra-squad scrimmage on Saturday, posted by Jovan Buha, we saw both LeBron and Kendrick Nunn take jump shots that clanked off the rim, and end up on a lowlight reel that was memed on Twitter. But for those who were paying attention, those bricked jumpers had something in common that warranted some degree of optimism: they both came as a result of a Westbrook ball screen. Russ used as a screener was something we all hoped to see more of last season under Frank Vogel, and it is something Ham has stated he expects from Russ. Setting good ball screens for the likes of LeBron, and Nunn represents a way for Russ to catch the ball going downhill with a little bit of space and a quick read to either dish to a teammate or get to the rim himself. We saw this ever so briefly down the stretch of an early game last season and it was effective. Check out the 7:30-7:36 mark on this video. https://www.youtube.com/watch?v=PZd2OBtm_mw

Russ, as We Know Him


There will certainly be times where Russ is asked to have the ball in his hands and go cook. Pairing him with a pick-n-pop big who could at least make defenses think about going under screens could help unlock this aspect of Russ’s game. I am intrigued by Thomas Bryant in this role. That pairing could make for a tough task to build out a competent defense that will hold up in minutes, but I would be intrigued to see the group rounded out with Austin Reaves, Patrick Beverly, and Anthony Davis to give it enough defense and shooting that could open up driving lanes for Russ.

We should not expect a completely different player; be prepared to see a pull-up 19-footer with 20 seconds left on the shot clock that clanks off the rim, or the unforced turnover as he tries to do too much. Hey, I’m not above dangling a carrot in the form of a pull-up jumper once per half if Russ is able to do more of the unglamourous work on offense for the majority of his minutes. Hopefully, Russ’s leash is short enough that we see less of this, and more of the good things that he can bring to this Lakers team.