It's not fair. Here you have a model basketball citizen with an inspiring story of a Sudanese refugee who fled to Egypt, then moved to England, and finally made his way to the United States to live out his basketball dream. He was a two time All-Star who produced for every team he's played for the first 12 years of his NBA career. Then came that fateful call in July of 2016.

The Lakers front office, run by Mitch Kupchak and Jimmy Buss, had attempted to offer a 4 year, $72 million offer to Atlanta small forward Kent Bazemore - the same Kent Bazemore who showed his first signs of NBA promise as a Laker only to go down with an injury at the end of the season. Bazemore recalled the experience:

I went from averaging 6.1 minutes per game to playing 28 per game. But with five games remaining in the season I tore a tendon in my right ankle.

The Lakers did not pick up my qualifying offer for $1.2 million, so I became an unrestricted free agent.

To the shock of no one, Bazemore declined Mitch and Jimmy's offer and instead re-signed with the Hawks. Out of desperation, the dynamic duo made the identical offer to then 30 year old Luol Deng - despite the fact he was not receiving offers anywhere close to that on the open market. His current team, Miami, wanted him back but couldn't pay him anything close to that after giving a max deal to their rising star center Hassan Whiteside (the summer of 2016 was a little nuts).

After 56 games with very little results, Luke Walton chose to go full youth movement and sat Deng for rest of his first season in Los Angeles. In year 2, Deng played a total of 13 minutes - starting opening night and then being shut down for the remainder of the season - even when Julius Randle, Kyle Kuzma, and Brandon Ingram were all benched with injuries. Deng has rarely complained; but has been frank to acknowledge he'd like a change of scenery.

"It’s been hard," he said. "It’s not easy not to play, but at the end of the day I’m trying to control what I can control. I’m still there with the team, I’m at practices, I’m trying to help the young guys as much as I can. For me, I would love to play. I don’t know if it will be here to be honest with you."

Deng said in November that he had asked the Lakers either for a trade or to buy him out of the two years remaining on his contract. He said Friday he is still hopeful for a resolution before the end of the season. In preliminary trade talks, teams have only shown a willingness to absorb the $36 million remaining on Deng’s deal if Brandon Ingram, Kyle Kuzma or Lonzo Ball is included in the deal.

The Lakers are not budging. Neither is Deng.

"They’ve made it clear that I’m not wanted here," he said "so for me I’ve just got to focus on what I got to control."

In a rare moment of unprofessionalism, Laker President of Basketball Operations Magic Johnson laughed at the idea of finding a trading partner for Luol. The simple fact is, the Lakers can not move a 2 year, $36.8m contract of a player who's barely played these past two seasons without some pain. I think it's time for some pain. Here's why: 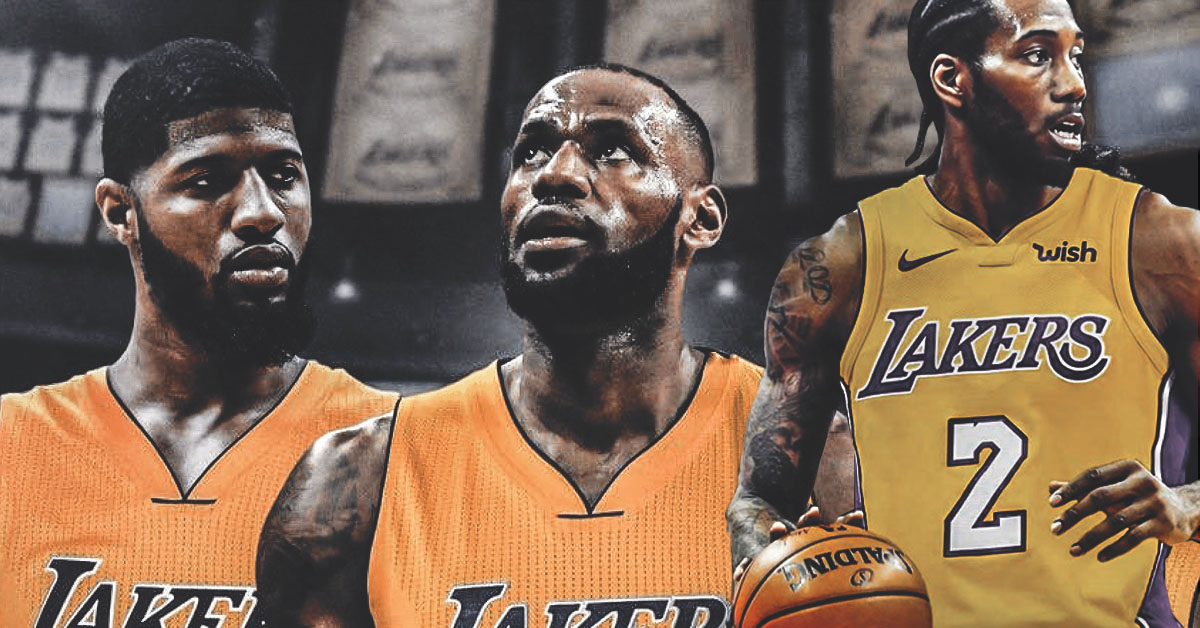 This summer, the Lakers have an opportunity to acquire three superstars. If things break the Lakers' way in the first few days of July and they know both Paul George and LeBron James want to join the team, Luol Deng must be traded into cap space. If the Lakers don't want to give up any assets, they could stretch Deng's remaining salary of $38.8m over 5 years; but the resulting annual cap hit of $7.76 million means there would be no chance to retain the services of Julius Randle - a unique player who has the ability to defend all five positions and looked like a walking double-double at the end of the 2017-2018 season. 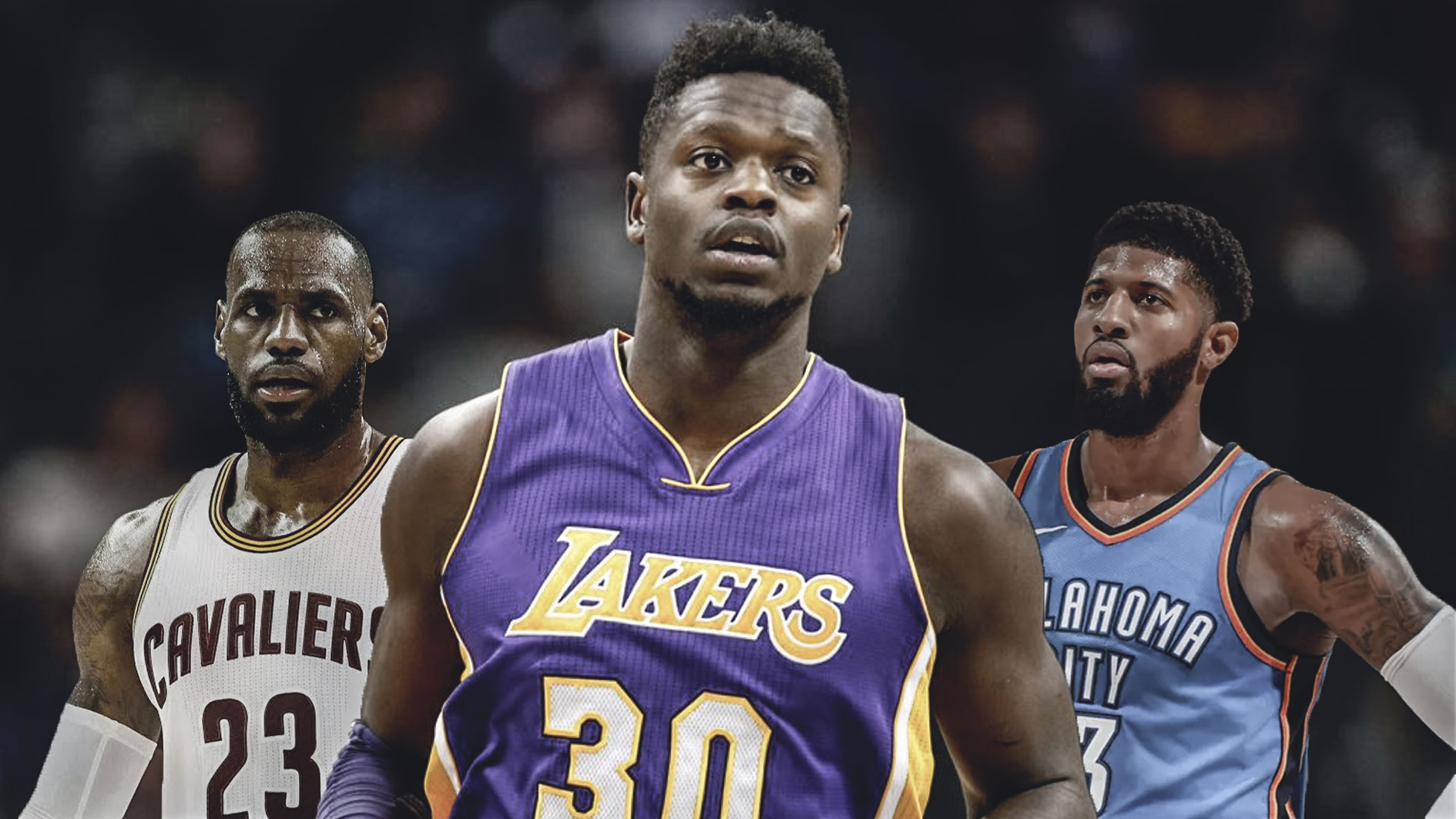 If the Lakers wish to retain Julius Randle as well, they must keep his $12.45m salary cap hold free after they sign both James and George. The only way to do that is to trade Luol Deng into cap space.
Come July 1st, the following teams will have more than $18 million in cap space to absorb Deng: The Atlanta Hawks, Chicago Bulls, Dallas Mavericks, New York Knicks, Philadelphia 76ers, Phoenix Suns and Sacramento Kings. Of those seven teams, six are rebuilding and could see the value of using their cap space to to generate draft picks.
The conventional wisdom is the asking price will be two first round draft picks. While this is a steep price to pay, the window for contention for LeBron James is very small and every effort must be made to move the franchise into "win now" mode. To that end, the Lakers should offer their first round picks in 2019 and 2021 fully unprotected in exchange for absorbing Luol Deng with no salary returning to the team.
What does signing Julius Randle have to do with Kawhi Leonard? At the moment, it appears the Spurs' front office wants to expend every last effort to heal their damaged relationship with the quiet superstar. They will also want to explore every trade option available with Eastern Conference teams rather than entertaining an offer from a division rival. If they do decide to start the season with Leonard but ultimately find irreconcilable differences, Julius Randle could be a valuable trade chip after the December 15th trading season begins and before the February 8th trade deadline. If not, Julius Randle is a wonderful fallback plan. He can be a valuable team member of a contending team featuring George and James.
Luol Deng has been a model teammate. He just wants the opportunity to play. If trading Deng gives us the ability to pair Julius Randle with two superstars and a small percentage chance to acquire Kawhi, we must move him in early July.
Edit: For those of you interested in different salary cap permutations, an NBA Twitter user named @Reed_nba created a terrific Google Sheet with all kinds of variations. It's locked since he regularly updates it; but you can always copy it and start plugging in numbers yourself. The option I am proposing is under the tab "LeBron+PG+JR+Trade Deng". The only thing I'd do differently is plug in another $1.7 million for Wagner's rookie salary.

What would your preferred outcome of the summer be?