How Deep a Hold does Russell Westbrook have on Paul George?

Russell Westbrook. NBA superstar? Without a doubt. Fashion icon? Yes, gotta give it to him. Modern day hypnotist? It’s time to examine the possibility. His recruitment of Paul George throughout a turbulent year may actively cause one of the NBA’s best players to opt-into a second season with Carmelo Anthony as a battery-mate, a feat more impressive than any regular season triple double.

Paul George, aka Victim #1, is a well-known NBA player who rose to fame as a reasonable match-up for Lebron in a few playoff jousts and for snapping his leg into many tiny pieces during non-NBA competition. For the last year and change, his history as a potential Laker has been well-documented and speculated upon ad nauseum. This furor rose to a fever pitch during last year’s offseason, in which he made it known to his employer the Indiana Pacers that he intended to sign with the LA Lakers as a free agent. Making the best of a bad situation, the Pacers flipped him to the OKC Thunder as a rental. Following an ugly regular season and catastrophic first round dismissal, the NBA at-large waited patiently for Paul George to follow-through on his stated intentions.

And then, a twist. Whispers began to emerge that Paul was more likely to stay in OKC than return to his hometown. What changed? His relationship with Russell Westbrook has become a significant factor. 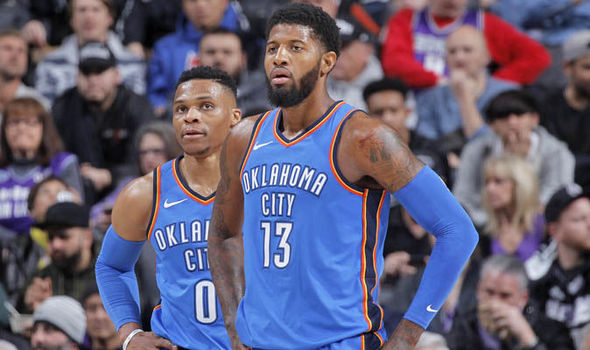 Where did this come from? Russell Westbrook clearly manifested some social skills during this most recent NBA season. He’s been called a ballhog, a stathound, and stand-offish: even though the allure of Golden State was exceptional, many would agree that Russell bears some responsibility in the departure of Kevin Durant. And yet, Russell could be found throughout the season describing PG13 in ways that could easily be described as ‘poetical.’ Observe:

It was easy to dismiss at the time. Just words. Lip service. In many situations, you couldn’t really say anything else and maintain team chemistry or political correctness. However, as circumstances begin to solidify around an OKC/PG13 extension, it has become clear that the bond was real. Paul arguably hadn’t had a true partner throughout his NBA career, and despite the seemingly obvious nature of the LA connection, he’s a human being. We all need someone to rely on.

Unfortunately for Paul, his emotional connection to Russell could very easily lead him down a bad road. Even beyond the cursed presence of Carmelo Anthony and his seemingly infinite magazine of long-distance 2 point bricks, the future in OKC is not bright. They are strapped beyond the cap and their front office is more known for letting Harden walk away over a few dollars than anything else. There are essentially no other significant players or youth on the roster. And yet, this is a situation that Paul George could actively choose.

Russell Westbrook is a man of many talents. Look at his play on the court though, and it’s simple to see that he has no regard for human life or emotion. He is a killing machine. He is an eradicator of hope and emotion for all his competitors. Does that mesh with the man who has hoodwinked Paul George into become his best friend, his loyal ally? We can only speculate as to how genuine those feelings are, vs. those that may arise from an MVP clinging to relevance. Recruitment and social skills aside, we can only ask that PG13 examine the complete situation and realize that he is running the risk of tarnishing his future over a short-term romance. We’ve all been there, right?