It was November 19, 1981, and the Los Angeles Lakers were sitting coachless.

Dr. Jerry Buss had just released Paul Westhead, their coach who had led them to a title just 2 years prior. The situation was murky at best. The Lakers had underperformed in the playoffs in the season before, and Magic Johnson wasn't happy with Westhead and his coaching tactics. According to Dr. Buss, Jerry had "already decided to fire him" before Magic's "me or him" demand. Whatever the reason, Jerry Buss took bold initiative to let go a pretty successful coach (Westhead had a championship and a career 111-50 coaching record).

The following day, Jerry Buss had a press conference to introduce the new head coach. Part of Jerry's displeasure was the fact that the Lakers played slow and not a "particular brand of basketball [Jerry had] grown accustomed to."

So he wanted, or needed, to make a change. Dr. Buss could have easily looked for an experienced coach, and to be fair, he did install Jerry West (who himself wasn't all that experienced, despite coaching the Lakers for 3 years before Westhead) as the "offensive coach" (amidst heavy confusion, no doubt). But Dr. Buss stuck with his decision and decided to let assistant coach Pat Riley take the helm with Jerry West's help.

Pat Riley was a former Laker who won a championship with the 1972 team with Wilt, West, and Goodrich. Before that, he played at the University of Kentucky for legendary coach Adolph Rupp. As a junior (his 2nd year on the "varsity team"), Riley lost in the championship game. In the NBA, Riley was mostly a role player during his 9 years in the league. He averaged 7.4 PPG, 1.6 RPG, and 1.7 APG. He dealt with injuries during his career. However, he was a fan favorite off the bench with the Lakers (and earned the nickname "Riles").

After coach Jack McKinney became severely injured, Pat Riley moved down from the broadcast booth to the sidelines in order to help Paul Westhead as an assistant. 2 years after moving down, Pat Riley was pushed into the spotlight as Lakers head coach - at the ripe age of 36. The team proceeded to win 17 of the next 20 games. Pat Riley spent the next 9 years in LA, where he won 5 championships.

So what does this all have to do with Jim Buss? Let me ask you a question, as you were reading the previous two paragraphs, did somebody else come to mind, aside from Pat Riley?

Well, if he didn't, let me introduce you to him.

There's this fellow who goes by the name of Luke Walton. Luke Walton played his college basketball at the University of Arizona, where he played under legendary head coach Lute Olson. As a sophomore (his 2nd year), Luke Walton lost in the national championship game.

Luke Walton spent most of his career with the Lakers, where he was mostly a role player (as evidenced by his 4.7 PPG, 2.8 RPG, and 2.3 APG averages). He won a championship twice with LA, alongside Kobe Bryant, Pau Gasol, and Lamar Odom. During his time there, he was praised for his high basketball IQ, and was mostly a fan favorite during the times he could play (as evidenced by the many "Luuuuuuukkkkeee" chants).

After retiring from basketball, Luke Walton spent some time in broadcast, on the Lakers Time Warner Sportsnet network. He then slowly began his foray into coaching by dabbling with some low-level coaching positions (most notably, his position with the D-Fenders as a player development coach).

But suddenly found himself as a top assistant with one of the hottest teams in basketball - the Golden State Warriors. While he didn't take over the previous coach, Luke did take over the reins temporarily and the team saw immediate success - going 39-4 during his time as head coach. He did this all as a 36-year-old.

Now, I'm not too much of a believer of destiny, but if there was one thing, in the universe of basketball that was 'destined' to happen, it's for Luke Walton to become the next head coach of the Los Angeles Lakers. Luke should've been on the Lakers coaching staff two years ago, but I guess it's funny how this thing called destiny works.

Jim Buss already made the correct decision to let go of Byron Scott - just as his Jerry Buss did over 30 years ago with Paul Westhead.

Now Jim needs to take another page out of his dad's book and hire Luke Walton - just as Jerry Buss did over 30 years ago with Pat Riley.

Luke Walton is nearly the perfect candidate, as he provides an "incredible fusion of youth, upside, experience, team connection and pedigree". While I really respect Ettore Messina and can see the upside in hiring some of the other rumored candidates, I think Luke Walton should be the clear cut number one option. It's Jim's prerogative to bring him back to Southern California.

Come home Luke, it's destiny. The Lakers need you. 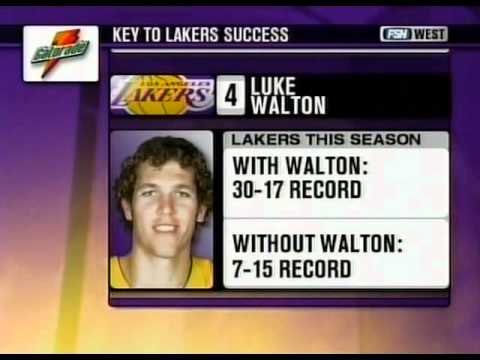