To return atop the Western Conference, the Lakers must find their franchise floor general.

Share All sharing options for: Lakers still searching for their franchise point guard

The Western Conference has a long list of exceptional point guards and none of them play for the Los Angeles Lakers. Without an All-Star caliber point guard, especially out West, title contention is virtually impossible. Of course, for over a decade, the Lakers were the exception to that rule, winning five titles in seven NBA Finals trips between 2000-2010. But they're now four seasons removed from their last title, with a fifth ringless campaign all but inevitable.

Since 1998, the Lakers have struggled mightily to replace Nick Van Exel, who is the last All-Star point guard to don purple and gold. They've employed shoot-first stop gaps (Smush Parker, Chucky Atkins), limited playmakers (Derek Fisher, Kendall Marshall), and past-their-prime Hall of Famers (Steve Nash, Gary Payton), all while drafting forgettable pieces along the way. The Javaris Crittenton Experiment failed almost immediately, just as Sun Yue came and went without a whisper. The Lakers' best return on investment has been Jordan Farmar, who contributed to two NBA titles, though he started only seven games in those five seasons. Entering the 2014-15 season, they'll trot out a trio of Nash, Jeremy Lin and second-round pick Jordan Clarkson, a 6'5 prospect with relative promise.

As Nash says goodbye and Clarkson learns the ropes, Lin will man the fort for the Lakers. He's still only 26 years old, but Lin's career feels somewhat longer than it actually is. He's joining his third team in four seasons, and depending on his performance this season, he could be searching for a fourth next summer. Lin makes $14.8 million as an expiring contract, putting the finishing touches on a poison pill offer sheet even the Knicks couldn't stomach. As a Rocket, Lin proved himself a productive NBA player, averaging 15.2 points and 6.1 assists per-36 minutes, but (favorable) advanced metrics didn't overshadow his average-at-best defense, leading to Patrick Beverley replacing him.

Lin is still a viable option for the Lakers despite his demotion in Houston. He's their best solution since 2004, when Gary Payton posted 14.8 points and 5.5 assists, and his contract places the Lakers in a win-win situation.

The Lakers have themselves a formidable option at point guard, even if for the short-term. Lin's shooting has improved over the years, and he's becoming more confident when attacking the basket. Lin averaged 4.2 points on drives to the basket, on par with John Wall and Kyle Lowry, per NBA.com.

Here's a look at the five players above, and below, Lin's points per game on drives: 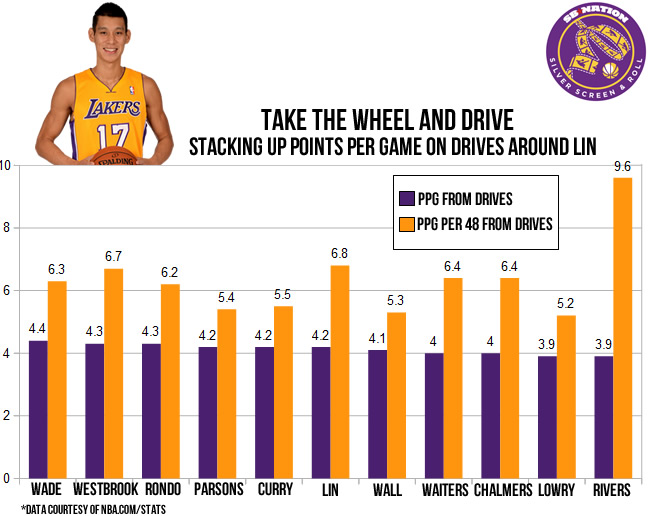 Last season, per NBA.com, Lakers ball-handlers were terrible in pick-and-roll situations, averaging .7 points per possession on such plays, ranking 28th league-wide. Conversely, Lakers roll men averaged 1.04 points in pick-and-rolls, placing them 10th overall. Lin expects to improve upon both rankings with Nash by his side, a sentiment he expressed during his press conference.

"I'm excited," the Harvard grad exclaimed. "I remember when he was in Phoenix and averaging 20 (points) and 10 (assists) a night. I'm looking forward to learning from him."

Of course, given the Lakers' aforementioned track record, there's prudence in considering the alternative: The Lakers seeking greener pastures.

After the 2015-16 season, the Lakers have only $10.8 million on the books, including Randle and Clarkson's team options. The NBA's new TV deal should should substantially raise the salary cap, with Grantland's Zach Lowe hearing murmurs of a 30-percent increase. That would entail a salary cap roughly $85 million, with which the Lakers can do plenty of shopping.

The Lakers peddling max-level money is enticing for anyone

Among a crop of potential franchise cornerstones, the Lakers will need only one. Goran Dragic, Reggie Jackson, Mike Conley, Damian Lillard, Russell Westbrook, Steph Curry and Ty Lawson can all hit free agency over the next three seasons. Despite their recent failings in landing big names, the Lakers peddling max-level money is enticing for anyone, especially considering only Dragic will be over 30.

Most players are taking short-term deals in anticipation of massive raises given the NBA's almost-inevitable increase in average salary. By then, the Lakers would've either rediscovered their footing among the NBA elite, or their longstanding need for a franchise cornerstone would be too damning for anything but valeting a Brinks truck for Westbrook or Curry.

No matter the means, the Lakers continue searching for an end to their point guard carousel, and it continues with Lin seeking personal redemption. Maybe they remedy the uncertainty with a surprise market play such as Deron Williams with the Nets. Perhaps, assuming they keep their 2015 first-rounder, they land a surprise franchise floor general like the Blazers did with Lilliard. Or maybe, for basketball reasons, the Lakers are on the right side of a star point guard divorcing his team.

Regardless, the NBA is better when the Lakers are thriving, and today's culture mandates a top-notch point guard. Until the Lakers follow suit, returning among the Western elite will remain a treacherous path for Los Angeles to maneuver.