Lakers season preview: Steve Nash's final chapter is his own to write

It's all coming to an end for Steve Nash, and he deserves a fair chance to end his career the way he wants.

Share All sharing options for: Lakers season preview: Steve Nash's final chapter is his own to write

Steve Nash's time with the Los Angeles Lakers has been an outright failure, there's no way around it. What looked like a coup for the Lakers at the time now looks like a huge blunder two years down the road, and if the 2015 first-round draft pick Los Angeles traded for him turns into a valuable player, it'll only look worse in retrospect. The Nash experiment comes to a conclusion this season, though, and along will follow one of the great careers in NBA history.

No one is trading for Nash the basketball player this season. The Lakers can no longer use the stretch provision on his contract. The curtains will close on Nash's career with only his health and capabilities left to dictate how his final season as a professional basketball player will play out, and that's the way it should be. Los Angeles isn't a team on the brink of a championship, but a team that would shock the world if they were even in striking distance of the playoffs. The expectations have faded since the infamous Sports Illustrated cover that seems like an eternity ago. How Nash performs is of little consequence to the Lakers' season, leaving one thing left to hope for in his time in Hollywood. Maybe, just maybe, he can pull it together for a season and get back to playing the sport he loves. One last hurrah.

What can we expect from Steve Nash? Quick questions on the veteran point guard as he enters his final season.

It's unreasonable to expect Nash to lead the Lakers. He'll be healthy enough to contribute in 50 games if Los Angeles is lucky, which is well above the 32.5 games per season he's averaged since being swept away from the Phoenix Suns. The gold and glory were never there for Nash once he approved the failed trade, but the man deserves a chance to close his career in a blaze of glory. He's given the majority of his life to the NBA, and in return he's been glorified as one of the greatest stars of his generation.

Head coach Byron Scott projects Nash as the starting point guard with the Lakers, for now, but there's no telling if that old Corvette's got enough gas in the tank to reach the destination 82 games out. Jeremy Lin is in a contract year with plenty to prove, a great stage to do it and, for all his own deficiencies, could easily prove to be more productive than Nash. Jordan Clarkson has great size and athleticism at the position and will undoubtedly run circles around old man Nash, who's never been NBA-fast to begin with. It's not hard to piece together hypothetical situations where Nash falls to the end of the Lakers' point guard depth chart, and it takes a dreamer to believe he's ever going to be a shining star on the court the way so many envisioned on July 4, 2012. Instead, he's more akin to a shooting star: Something you catch only a glimpse of, just for a moment, before it disappears into darkness. 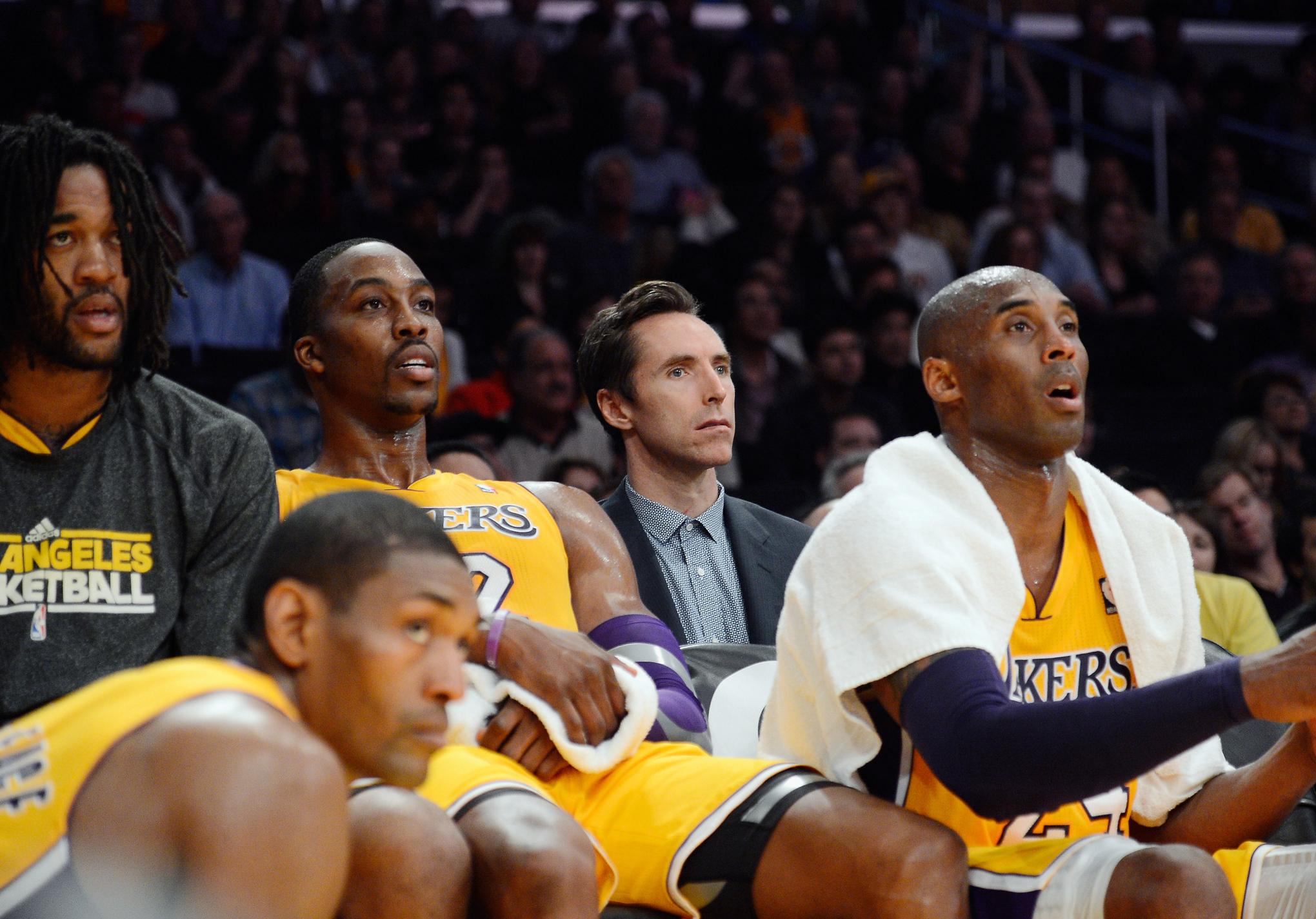 As Lakers fans, it will be hard to separate Nash from the shipwrecked season with Dwight Howard, no matter how prolific his career was prior. Howard and Nash were the two life boats who were supposed to carry the Lakers back to a land filled with Larry O'Brien trophies. Instead, the purple and gold wound up on Skid Row. To Nash's credit, however, he never seemed disingenuous about his desire to deliver triumph to Lakers fans. While Howard wore out his welcome in Los Angeles quickly, Nash never grated the nerves of the fans he represented. Instead, he embraced his new identity as a Laker, taking a strong stance after Howard decided to skip town to join the Houston Rockets in an "us against him" styled way.

Unfortunately, all the desire and passion in the world hasn't been enough to overcome the aches, pains and nerve damage Nash has suffered throughout his career. It's not his fault his knee finally threw in the white towel when it collided with Damian Lillard. It's not his fault the 42,358 minutes he's played throughout his entire professional career have left him with next to nothing to offer. Reading his quotes, watching his face on the sidelines and walking through his daily life in Grantland's exclusive "The Finish Line" series leaves little doubt that being away from the court has been more exhausting for him than averaging 40 minutes per game through an entire season. What's a 40-year-old point guard to do, though, besides try his damnedest to do what he loves?

Nash's inability to stay on the court has led to justifiable frustration from fans for numerous reasons. After all of the heart-wrenching shots Nash had hit and facilitated against the Lakers, he showed up to Staples Center with an unloaded gun. How could a man who caused so much anguish to the Laker-faithful be so toothless all of a sudden? How could the front office ever justify trading away a first-rounder -- A FIRST-ROUNDER! -- for a player who can't even play half a season? How could this be reality?

But in the midst of it all, it's easy to forget Nash is probably the most frustrated person of all. His livelihood, his love, has all but been taken from him. All he can do is visit it when his body is feeling up for it, and even in those moments, he sits alone in a room where his dream lies crippled and on life support. The monotonous ping of the heart rate monitor the only sound filling the room as he tearfully looks on.

Kevin Ding of Bleacher Report chronicled a defeated Nash once his nerve problems returned last season, and the man once deemed "Gatsby" by Kobe Bryant for his incredible optimism in life was anything but:

He tried to put on a braver face as more media members collected and cameras got switched on. Nash largely failed there too, as an uncharacteristic aura of defeat hung off him heavier than the gray sweater he wore.

Nash stumbled over the initial words: "I hesitate to even talk about it now because it's probably not a good time; I'm feeling a little emotional."

Many will question Scott if he gives Nash the starting nod to begin the Lakers season. He's not a long-term answer at point guard and the Lakers can stabilize the position by starting the player they traded for this summer, Jeremy Lin. In time, Jordan Clarkson may prove ready to take on extended responsibilities once he adjusts to being a floor general at the highest level of competition. What's there to lose, though?

Maybe Nash won't find his stride and attack the angles defenses give him. Maybe he'll get burnt every other possession by the endless stream of talented point guards that have marched into the NBA. Maybe he'll never average more than 10 points and six assists even in his finest stretches through his final year in the NBA. Does that matter, at all, to this Lakers team? Will 15-to-20 extra minutes of Lin or Clarkson being on the floor be the difference between playoffs or another early end to the season for the Lakers?

Nash should be allowed an opportunity to write the final chapter to his career in the NBA. It may be a frustrating exercise, but the Lakers have nothing to lose by giving him the chance he deserves. Los Angeles, perhaps more than any NBA city, knows what it means to respect basketball lore. It's one of the reasons the Lakers front office awarded Kobe Bryant a lifetime achievement extension, to make sure he ends his career in purple and gold, and honored the great Chick Hearn with a statue in front of the house his voice helped build. The Lakers are living basketball history.

Steve Nash is living basketball history, too. He's likely inspired your favorite point guard and haunted your dreams because of an insane performance against your favorite team. He's done things on the court he should never had been capable of. He's defined the point guard position for two generations of basketball players, and fans, and when he puts the final period on his career, it will be a sad day for the National Basketball Association. Even if Nash was never able to whirl into our hearts as Lakers fans, he's done enough for the sport we love to deserve our respect.

Once the credits are done rolling and the lights turn back on in the theater, he'll get a standing ovation for what he's done. I'll be among those clapping in appreciation of what he's done. Hopefully that includes a few memorable performances this season.