Michael Beasley and the state of the Lakers' reclamation projects

With rumors swirling that Michael Beasley will be the latest and greatest of the Lakers' reclamation projects, has the team lost its way in their bargain bin pick-ups?

Share All sharing options for: Michael Beasley and the state of the Lakers' reclamation projects

Michael Beasley or Derrick Rose? Who would you rather have?

Wait, seriously. Seriously! I mean it!

There was a point in time at which this was a serious question.

In the weeks and months before the 2008 NBA Draft, this was the query talking heads and bloggers pondered on: Who should the Chicago Bulls take with the first-overall pick? Memphis point guard Derrick Rose, who had nearly taken his Tigers team to the NCAA championship? Or should it be Beasley, the Kansas State standout scoring machine? The debate raged, but eventually, the Bulls picked hometown boy Rose, who would go on to win Most Valuable Player honors and become one of the league's most electric players.

Meanwhile, the Miami Heat selected Beasley with the No. 2 pick. They envisioned him playing alongside Dwyane Wade for years to come, resurrecting a South Beach squad that had been NBA champions just two seasons earlier.

It was not to be. Beasley, despite scoring averages of 14 and 15 points per game his first two seasons, was shipped to Minnesota to facilitate the LeBron James sign-and-trade deal in 2010. Armed with substance abuse violations and general asshole-ery, the forward somehow made himself even more expendable beyond the prospect of being the collateral damage in acquiring both James and Chris Bosh. He'd last just two seasons with the Wolves before he signed with the Phoenix Suns on a surprising three-year, $18 million deal. Beasley's time with the Suns was even more strained and laughable than his previous two stops, and the Suns bought him out of his deal just 14 months after they inked the contract. Citing problems with Beasley's "personal conduct," Phoenix believed their team would be more improved without him than even keeping him on the team's bench. 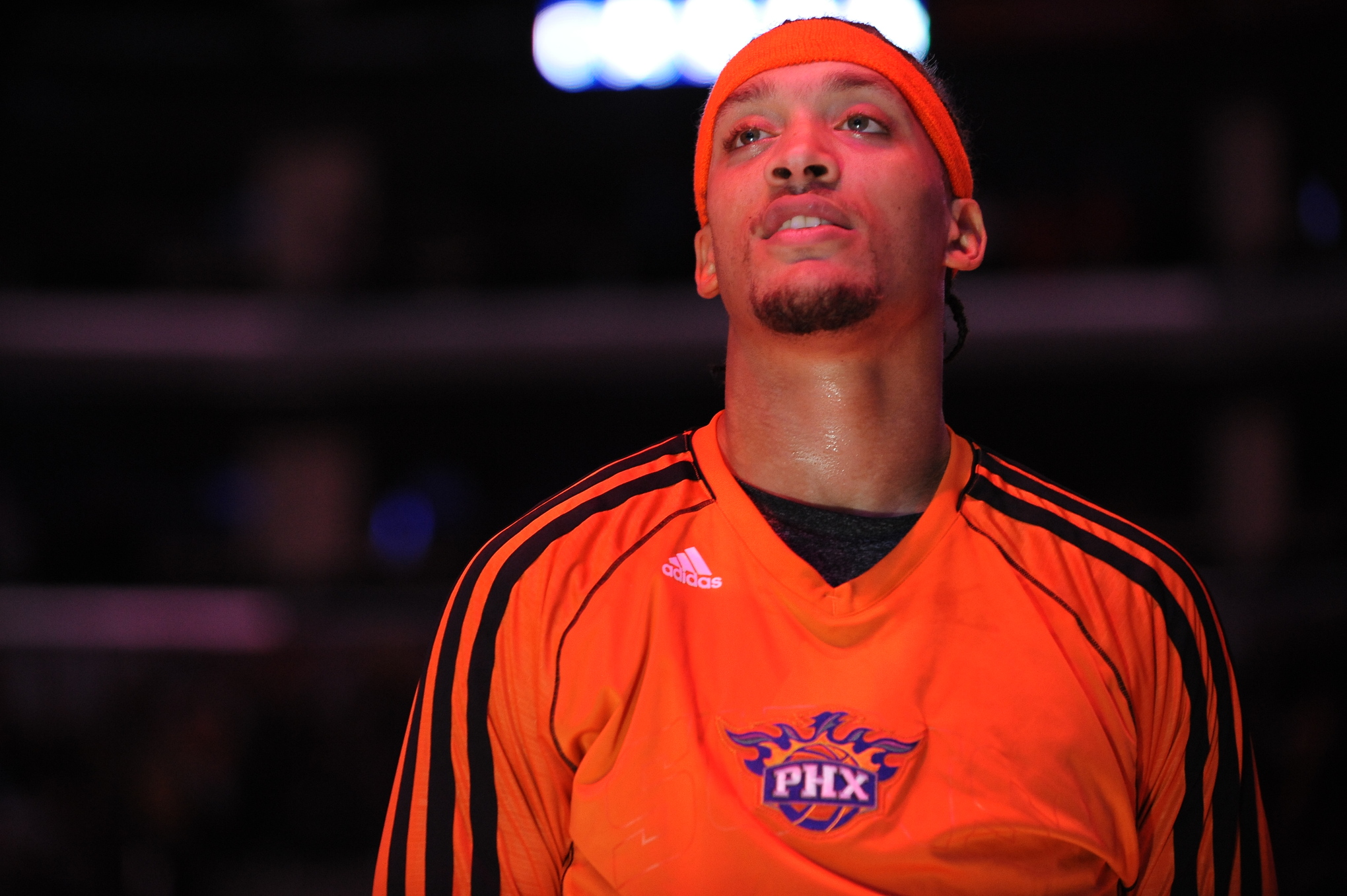 This, Lakers fans, is the man who may be the organization's new 14th man.

As the offseason slowly comes to an end, there have been reports citing the team has held multiple workouts with Beasley. With just 13 players on the roster (and the team usually only holding 14 players), there is a solid chance he could very well land with the Lakers as their newest reclamation project, making for another puzzling personnel maneuver in an off-season full of them.

After striking out with a half-dozen "elite" free agents this summer, the Lakers strangely rewound the clock and brought back most of the core of a 27 win team. General manager Mitch Kupchak and vice president of player personnel Jim Buss decided the best course of action would be to bring back Jordan Hill and Nick Young, both productive players, as well as trade for point guard Jeremy Lin. Other than that, most of the other moves were almost all reclamation projects of sorts: Big man Ed Davis, veteran Carlos Boozer (via amnesty waiver claim) and the re-signed Xavier Henry and Wesley Johnson.

What's strange here isn't the strategy. For a team in a position such as the Lakers -- a rebuilding organization far from a playoff berth while trying to maintain cap flexibility -- picking up cheap players with uncertain upside (but upside nonetheless) is a sound manner to proceed. It's the execution of this strategy that's most confounding. The Lakers' "plan," such as it is, includes gathering assets (trade exceptions, draft picks and young players), maintaining financial flexibility with expiring deals and trying to hit it big with some of these ex-blue chip prospects. L.A. is easily checking off the first two boxes, but how about the third?

The plan was much of the same last year. The Lakers brought on Johnson, Henry, Hill, Young, Jordan Farmar, Chris Kaman, Kent Bazemore, MarShon Brooks and Kendall Marshall, each of which was at one time a useful player or a touted draft prospect. The Lakers hit on some of these lottery tickets, including the Swaggy one, Hill and Farmar (for half the season) and got virtually nothing with others (Kaman, Brooks and Johnson). At the time, I was fairly satisfied with how L.A. proceeded and thought if the team wasn't going to win, they could at least use the year to find seeds for the next championship team. Seeing as 2014-2015 looks like a mere rerun of last season, I have no problem with the Lakers repeating this strategy.

In bringing back guys like Hill and Johnson, the Lakers aren't punching a couple more lottery tickets -- they're looking at two $3 dollar redeemed pieces of paper. At this point, we know what type of player each man is and their upside, whatever we thought it was, has more than likely already been fulfilled. Even moreso with Johnson than with Hill, the former Syracuse swingman is simply the prototype for "replacement player." There is no chance he'll be anything more than that.

All in all, the Lakers spent $9 million on Hill, $3 million on Boozer, and signed Johns and Henry to veteran's minimum deals. If you are under the assumption the team is going to get replacement-level production (or lower) from an over the hill Boozer and Johnson, as well as a solid, but unspectacular performance from a role player like Hill, then why not take flyers on unknown commodities? The Lakers know what they are getting with Hill and Johnson. Henry still may have some upside, but even at his best last season, he looked far away from hitting whatever ceiling we once thought he had. These players were big pieces on one of the worst teams in franchise history. If they're not going to help the team win, and we don't think they're going to emerge into role players for future playoff contenders, then what's the point of keeping them around? In Hill's case, some may argue that he's around far more for his contract than anything else. I'm sure the Lakers could have paid another rebounder $9 million dollars. Hill is not unique in that case. It feels that this time around, the Lakers are making poorer calculations with even less to gain. None of that moreso than kicking the tires on Beasley.

I don't know how else to say this: It's a really stupid idea

Michael Beasley isn't a lottery ticket. He is a skunked bottle of wine. He's 25 years old, sure, but has alienated himself from his last three teams in six seasons. He couldn't stick with a Minnesota squad hurting for shooting swingmen, a rebuilding Phoenix club looking for any semblance of talent or a Heat team desperate for an explosive scorer off the bench. He would come to the Lakers needing to beat out a dozen other guys for a spot at either of the forward positions. Bringing him on isn't just an indictment that the Lakers aren't hitting on their reclamation projects, but an indictment of incompetence. Signing Michael Beasley is willingly bringing on a potentially cancerous element to a team filled at his positions and under the stewardship of a notoriously hard-line coach. I don't know how else to say this: It's a really stupid idea.

I was absolutely killing the Lakers for bringing on Nick Young this time last season. Young had many of the same basketball deficiencies Beasley is perceived to have: Selfish play, lackadaisical defense, poor shot selection and a spotty employment history. However, at his core, Nick was making bad basketball decisions, not poor life decisions. He was a distraction on the court, but by all accounts, a nice guy and a solid teammate off of it. His buffoonery (for lack of a better, or more appropriate word) revolved around his tantalizing set of basketball skills that only rarely shone brighter than his sometimes overbearing personality. Michael Beasley does have some of those basketball gifts, but unlike Young, hasn't had his troubles confined to the court. He's been a poor citizen off of it. Guys like Johnson, Henry, Young, Hill, Marshall and Davis hadn't put it together in games. Beasley hasn't done so on or off the court. He is simply not a risk worth taking at this point. If the Lakers' current batch of reclamation players don't pan out, the Lakers will lose games. If Beasley doesn't pan out, the Lakers may lose games as well as their dignity.

That's not to say the Lakers haven't taken some decent flyers this offseason. Ed Davis is a very worthy gamble, especially with some of his bright spots in Memphis and Toronto the past several years. Even Jeremy Lin, who some would say has untapped All-Star potential (some would say that), is a lottery ticket of sorts. However, turning back the clock with guys like Boozer, Johnson, Hill, Henry and potentially Beasley is simply confounding to me. I completely understand what the Lakers have to do going forward. But for this one part of the grand plan, I'm just not sure what they're thinking.