The perils of Linsanity: How effective will Jeremy Lin really be?

Wading through the mythology, the real question remains: can Jeremy Lin help the Los Angeles Lakers this season?

Share All sharing options for: The perils of Linsanity: How effective will Jeremy Lin really be?

There's a chance Jeremy Lin will never be fairly judged as an NBA player. He's undoubtedly an asset offensively, but defensively he may never be anything less than a liability. Is he the guy who dropped 38 points on the Los Angeles Lakers in Madison Square Garden two-and-a-half years ago, or is he the dude pointing fingers after Steve Blake rifled off a game-winning jumper in his face last season?

And that's exactly where Jeremy Lin's perceived value is murky even in the clear light of day. He's proven to be a productive player, but yet, is worth more to any team he plays on because of his heritage or facial features. Lin is a marketer's dream, especially in such an Asian-American heavy region like Southern California. He's a draw all on his own, a ready-to-go community builder just by virtue of his race and ethnicity. The Lakers have never had a player quite like him: Equal parts novelty act and living folk hero. This, more than his on-court dichotomy of skills, will always skew what Lin's true value is as basketball player.

It's important to move past what Lin is as a cult figure and examine exactly what he is as a basketball player.

But this is who and what he is, and there's likely nothing he can ever do about it. Off the court, he'll mean more to the Asian-American community in the Southland than any other place in North America, save for the Bay Area. Many Lakers fans will never know just how much he means in those circles and what a monumental acquisition this is to a segment of the largest fan base in the entire world.

However, wading through the dozens of thematic essays I could write on the topic, it's important to move past what Lin is as a cult figure and examine exactly what he is as a basketball player. Sometimes it's damn near impossible to separate the two topics when it comes to a somewhat-transcendent person like Lin, but that's why you come to Silver Screen & Roll: Unbiased insight. Except when it comes to Byron Scott.

That being said, with the head coach position and roster set for next season, we can better take a deep dive into what Lin's strengths and weaknesses are and just how they'll affect the Lakers.

Lin is a fairly mediocre defender at best. He's not the greatest athlete the world has ever seen, and his lack of lateral quickness destroys any hope of being an adequate perimeter defender. Opposing players blow past him regularly and he heavily relies on a rim protector behind him to hide his shortcomings. I've read several articles pointing out Lin's somewhat favorable defensive metrics, but defensive statistics are far from a perfect measure of a player's effectiveness.

Combined with a returning Kobe Bryant and a decent, but unspectacular, Nick Young defending at his side, the Lakers could be negatively affected by having Lin on the perimeter. Especially without shot blockers behind him.

It's apparent Lin's greatest strength is creating chaos with his aggressiveness in driving to the rim. Last season Lin took just over nine shots per game (down from nearly 11 the previous two years), but upped his free-throw attempts per game to 3.7. Part of this has to do with former teammate Dwight Howard sucking in defenders around him, but another facet has to be Lin's ever-present desire to get to the cup.

Lin is a solid ball-handler and has been getting better anually, lopping off more than one giveaway over the previous two seasons. He's now a more careful dribbler and passer, which should be expected from a player completing his third season in the NBA (though he's played in four seasons now). 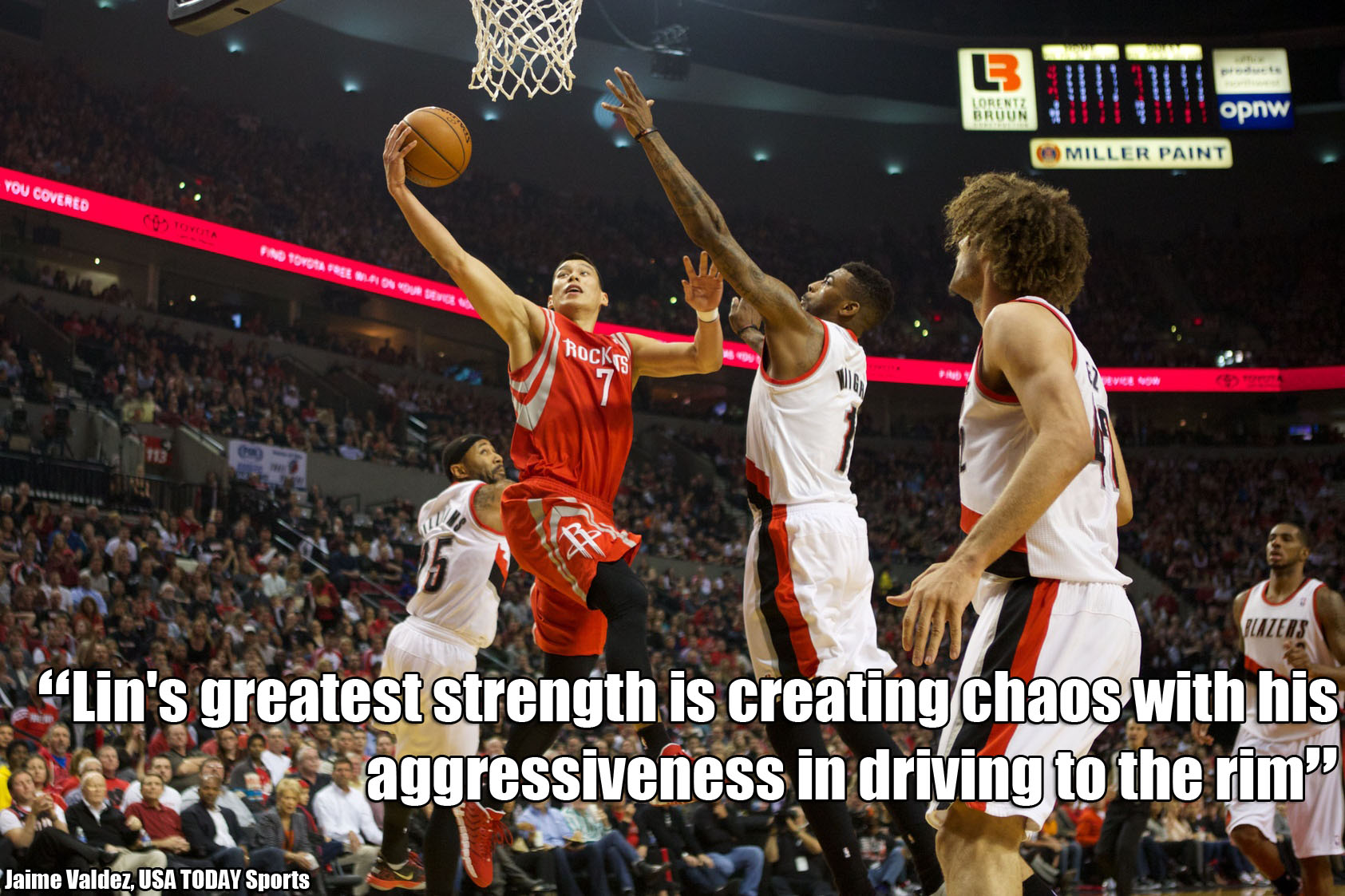 The Lakers would best utilize Lin's strengths by surrounding him with shooters, which ultimately boils down to what rotations Coach Scott plays and players knocking down their shots. Carlos Boozer and Julius Randle look like they would benefit most with open 15-footers, but from three-point territory, it's unclear who the team's sharpshooters will be beyond Nick Young and, if he's hot, Kobe Bryant.

Scott has stated his preference is to run with his young, athletic team, but onlookers should take that with a grain of salt. After all, what coach doesn't want to get easy transition buckets? Scott has a proclivity for slow-down, post-up offense, which will no doubt be utilized with guys like Randle, Boozer and Bryant. Lin's greatest basketball skill might not be utilized enough if this is the fate of the Lakers' offense.

Lin's ability to get into the teeth of opposing defenses should be helpful, but will be all the more effective if Jordan Clarkson and/or Xavier Henry can be turned into reliable long-range weapons. Scott letting Lin initiate action at the top of the key would also allow him more opportunities to play within himself, and could help keep the offense organized and flowing when Bryant isn't on the floor.

Jeremy is a solid, though generally unspectacular, passer. Lin has demonstrated that while he's considered a "point guard", he's actually more of a combo guard at heart. He finished last season with the lowest assist percentage of his career (22.3 percent, down from 29 percent the year before and 41 percent while in New York with the Knicks), as well as his lowest assists per game since his days in the Bay. This is particularly odd considering he had multiple offensive weapons surrounding him in the form of Howard, James Harden, Chandler Parsons and Terrence Jones.

Still, Lin has a nice handle and can make most plays required of a point guard in today's NBA. Looking at the Lakers' other options, such as a broken-down Steve Nash, Bryant and rookie Clarkson, Jeremy will be expected to be responsible for much of the ball handling coming up the court on any given play. Much of his prowess could be negated if Scott carries through with his purported penchant for Princeton offense principles that would limit Lin's chances to create scoring opportunities, however.

It certainly doesn't hurt the Lakers that Lin can effectively handle and distribute the rock, but perhaps Scott's post-up heavy offense may actually benefit his somewhat uncreative new point guard. We'll have to wait and see how the pieces, and scheme, all fits together.

Lin made his bones based on two factors: His aggressiveness going to the rack and his big, brass balls shooting touch.

Lin was less than impressive as a jump shooter last season, however. He notched a 33 percent clip on jump shots overall, and connected on just 36 percent of his attempts between 3 and 16 feet, according to NBA.com. Lin is very much a guard of the times, as he's either taking shots effectively at the rim, or performing at league-average from the three-point range (36 percent from long).

Overall, Lin is a floor spacer in the strictest sense of the word: Opponents have to merely respect his presence, not plan for it. He's very much a willing shooter, which may be the most dangerous part of his shooting arsenal. He'll have to become an above-average three-point shooter if he's going to make defenses pay for doubling up on Kobe Bryant or, hopefully, Randle.

Lin's skill set doesn't seem to jibe with what Byron Scott may have in store for him on the surface. In fact, there's an argument to be made the team that's been assembled would have been better off with Mike D'Antoni at the helm rather than their new skipper. But what's done is done, and that may not be good news for Jeremy Lin or his ample fan base in the Southland.

The Lakers' acquisition of Lin to fill in as their new starting point guard looks beneficial, on paper. The positives -- his dribble penetration, passing, ball-handling and respectable three-point shooting -- give reason for optimism. His defense and the fact that he's"respectable" shooter but not a knockdown threat won't help him with a coach who's emphasized locking-down and posting-up opponents. Lin has value as a player, but will it show up next season under Byron Scott?