Projecting and discussing the Lakers defense

Despite their new coach's best intentions, will the Lakers' defense have more leaks than the Titanic?

Share All sharing options for: Projecting and discussing the Lakers defense

We have reached the dead point in the offseason. There are front page stories on basketball websites devoted to Khris Middleton milking a cow, various players and league officials taking the ALS ice bucket challenge, and breaking down Nick Young's social media postings.

The point is, there's not an incredible amount of tangible basketball news currently, which makes this a good time to take a look back, and forward, at the Los Angeles Lakers' defense. A lot of ink, both real and virtual, has already been spilled on this topic, but the reality is no one knows with certainty what the defense will look like this year. This uncertainty is due to a few factors, but can mainly be attributed to an overhauled roster and a new coach. We do know last year's version of the purple and gold "produced" a putrid defensive rating (how many points scored by an opposing team per 100 possessions) of 107.9 according to NBA.com, which was bad enough for 28th in the league, ahead of only the woeful Milwaukee Bucks and Utah Jazz.

The Lakers defense has become progressively worse in recent years and finally hit a point where it's no longer an issue that can be ignored. Here's a quick look at the defensive ratings for Los Angeles since the 2008 season: 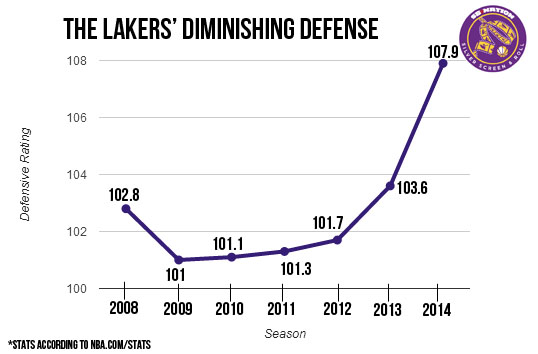 Will the defensive trend continue, or will the Lakers break out of this slump? Let's break down the individual pieces that will go into making up that defense.

Unless stated otherwise, all on/off court splits are from NBA.com.

"Kelly's athleticism and quickness easily carries over on defense as well. He surprisingly showed signs of being able to defend multiple positions. His size and quickness are key factors behind that, but Kelly put in clear effort while defending the opposition. This is another huge plus for a rookie forward, and one that could help him gain the trust of head coach Byron Scott... The biggest flaw in Kelly's defensive game rests in his lack of strength compared to the majority of frontcourt players. He does have solid low-post defensive fundamentals, but opposing bigs out-muscle Kelly to get easy looks at the basket. This shouldn't be a huge issue, considering he spends the majority of his time away from the paint, but he needs to be able to figure out a way to match up against stronger opponents in the low post."

"Ibaka allowed opponents to shoot 43.9% at the rim, with Davis allowing a similarly sterling 43.3%. Caveats apply, given Davis's more limited sample size (15.3 minutes per game in 63 games versus 33.2 in 81 for Ibaka), as well as the fact he was presumably playing against second-unit players for a larger percentage of those minutes than Ibaka. Regardless of the circumstances those are impressive rim protection numbers at the NBA level, which was one of the biggest weaknesses of the Lakers'' shameful defense last season."

Lakers rookie draft picks Julius Randle and Jordan Clarkson may have had nice, optimism-inducing Las Vegas Summer League performances in many ways, but they will likely succumb to many rookie mistakes on defense in the regular season while they are still adjusting to and learning the pro game. The Lakers should be trying to give these guys all the minutes they can handle (especially Randle) to get used to playing at the highest level, but the consequences of that will be most felt on the defensive side of the ball.

Randle has the athleticism to step out and defend on the perimeter against stretch fours, but he'll have to learn how to use his body and angles to make an impact while sharpening his defensive awareness. He's undersized to defend in the post, but his strength and wide frame may help make up for that. How he performs on defense will likely be a big factor in how quickly Byron Scott will gain trust in him.

Lastly, we come to the elephant in the room. Mike D'Antoni has been fired resigned, and his Zen Master-approved defensive coordinator Kurt Rambis has taken his talents to Gotham, leaving the Lakers with probable scheme changes under new head coach Byron Scott.

The worry that comes with those scheme changes is that Byron may not be able to build anything close to a functioning defense without the services of someone like Tyson Chandler or Kenyon Martin in their prime, as he did with the Hornets and Nets. One statistic that has been bandied about lately is that Scott is the only head coach to have a team in the bottom-five in defensive efficiency three years in a row since the league expanded to 30 teams (during his three years in Cleveland). To be fair, that was not all his fault, as he was hardly given a bunch of All-Defensive First Teamers to work with in Cleveland, but he faces a similar outlook in L.A. this season.

The bottom line is it's hard to build a good defense in the NBA. While Tom Thibodeau has the reputation of being able to craft an elite defense no matter who his front office gives him, he has been working for the majority of his time in Chicago with great defenders in Joakim Noah, Luol Deng, and Carlos Boozer Taj Gibson, among others. It is even harder to build such a defense when the pieces all, at minimum, have flaws that need to be covered up.

No matter Byron's supposed "defense first mentality," it would probably be the best coaching accomplishment of his career to get the Lakers to be an average defensive team. Kobe and Nash are going to be active defensive minuses when they are on the floor most of the time, Boozer and Randle could comprise a power forward rotation of revolving doors to the basket and Ed Davis has never played starter's minutes in his career. This team has a chance to be decent offensively, but the old basketball (and sports) cliché still rings true: Defense wins championships. It's hard to find a scenario in which this Lakers team can do that on a consistent basis, and it will most likely be a death knell for any aspirations of success they hold this year.