Kobe Bryant and Steve Nash preparing for the end together

Kobe Bryant and Steve Nash prepare to put the finishing touches on their masterful careers.

Share All sharing options for: Kobe Bryant and Steve Nash preparing for the end together

Editor's Note: Please welcome James Lamar, who will be one of the new contributors here at Silver Screen & Roll. He should be a great addition to our writing crew, and I look forward to many more articles from him. You can follow the newest member of the SS&R family over here. Without further adieu, here's his debut.

When the Los Angeles Lakers acquired Steve Nash, they were hoping they landed their most formidable point guard since 1998, when Nick Van Exel represented them in the All-Star Game. Alongside Van Exel was a blossoming star, Kobe Bryant, who started his first mid-season classic at 19 years old. Eighteen seasons after entering the NBA together, Bryant and Nash prepare to co-author the final chapters of their illustrious careers, each seeking the same closure.

It's impossible to tell what could've been with Bryant and Nash sharing a backcourt, whether during the past two seasons or amid their remarkable primes. The only certainty is their pairing has been everything but what the front office dreamed of, and what Lakers fans longed for. Dreams of championship vigor quickly decayed into today's humbling reality. Nash's Lakers tenure spiraled into the closing act of his Hall of Fame career in less than two games. He's missed more games the past two seasons (99) than the decade preceding his arrival (40). Since 2012, he's been a dispiriting antithesis of his former self, only recently overcoming the nerve pain limiting his aging body.

No one in NBA history combined maestro-like passing with expert marksmanship better than Nash.

Everyone -- from Mitch Kupchak to Gary Vitti, and even Nash himself -- readily admits he'll never be the same. He's never been an overpowering athlete, using an uncanny basketball acumen and explorative approach to hone his craft. For Nash, no angle or amount of space should go uncharted. As the cliche often goes, he literally made something out of nothing. The two-time MVP could be stuck in the air, almost pausing, and you could trust a dazzling assist was imminent. Whether orchestrating a head-spinning (for defenders) fast break, or isolating himself in preparation for his next masterpiece, Nash's repertoire was unmatched. Of course, there's Magic Johnson, and the beloved Isiah Thomas, John Stockton and Jason Kidd -- all of whom preceded Nash's transcendence -- but no one in NBA history combined maestro-like passing with expert marksmanship better than Nash. No one. He's third all-time in assists (10,335), ninth in three-point efficiency (.428), and 12th in threes made (1,685). 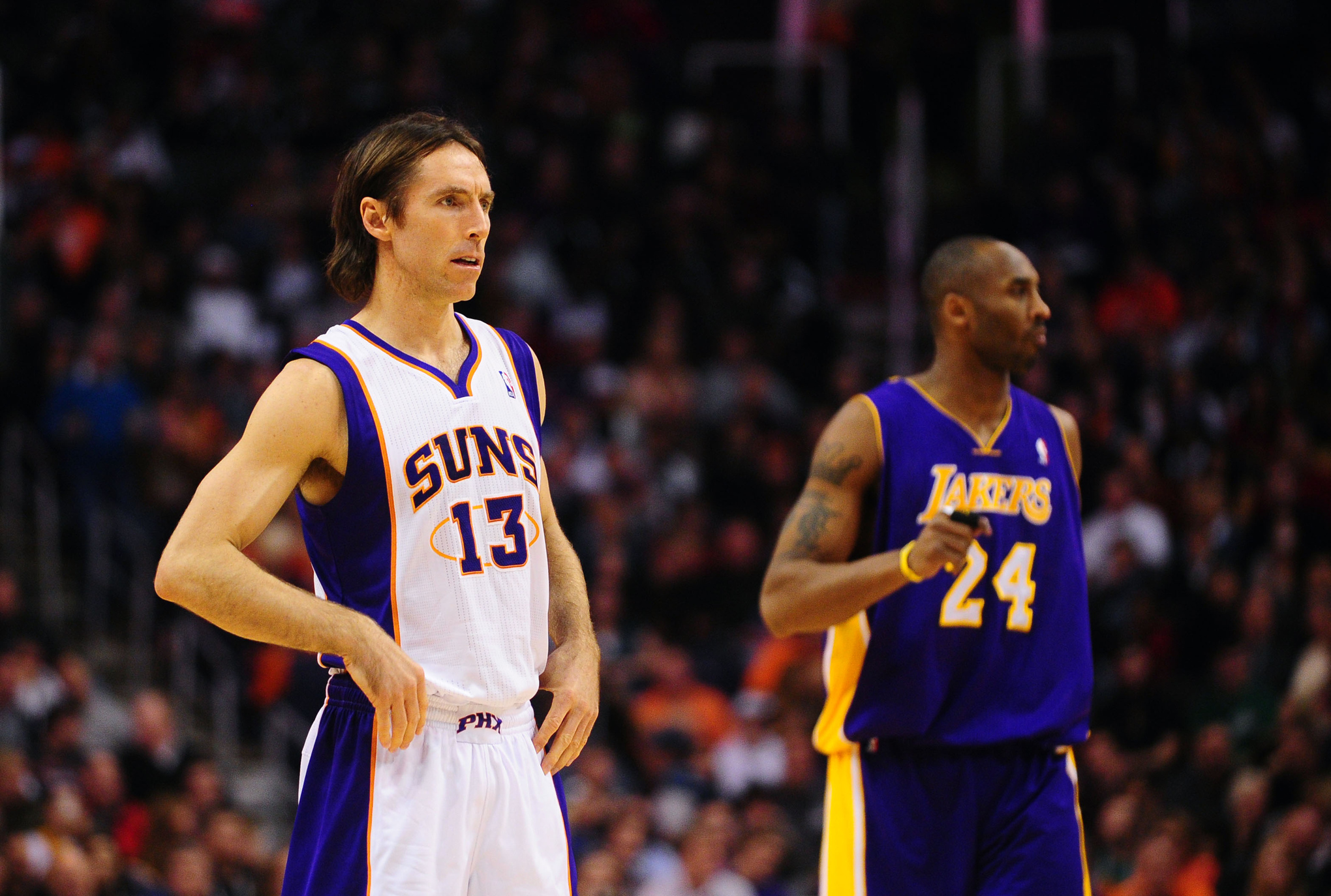 But instead of relocating that success to Los Angeles, Nash has eroded into a shell of himself. Bryant, while finally recovered from a broken knee and torn Achilles, is still a relative unknown going forward. The team's roster is laden with unproven youth and discounted veterans, with Bryant and Nash being the biggest question marks of all. Julius Randle must prove himself as a rookie, but adolescence favors his case. Jeremy Lin and Carlos Boozer are on season-long tryouts. Jordan Hill and Nick Young won't carry a world of expectations, even after being handsomely compensated. How Bryant and Nash return will be measured beyond stats. Can Nash mentor Lin into a long-term option? How will Bryant's insatiable championship appetite respond to an unfit roster? The intangibles will tell just as much as their statistical outputs.

At this point, the Hall of Famers are seeking an opportunity to atone for lost seasons and missed opportunities.

Bryant isn't averaging 35.4 points again, and Nash is more likely to average 20 minutes before coming close to replicating his familiar 10 assists per game. At this point, the Hall of Famers are seeking an opportunity to atone for lost seasons and missed opportunities. Nash signed a three-year pact in hopes of collaborating with the Lakers on his first ring, and Bryant is always hungry for a sixth. But in a loaded Western Conference, and with a reloaded Cavaliers roster, moral victories are the Lakers' best-case scenario.

It’s reasonable to expect the team to improve upon last season’s 27-win output, but tempered expectations entail only a marginal increase. Bryant should return to reasonable form, especially after missing 76 games last year, but his 2012 campaign (25.5 points per game on 46 percent shooting, a career-best 6.0 assists average) was good enough for only a seven-seed, and that was alongside Dwight Howard. Things are different for the Lakers, and their elder statesmen illustrate the team’s humbling mortality. Two seasons have changed so much, though Bryant and Nash returning prompt inevitable hope for glimpses into yesteryear, sporadic as they might be.

All eyes on Julius Randle's rookie year How effective will Jeremy Lin be?

Imagine it. This generation's most inventive, selfless passer partnering with the NBA's most daring shot-maker, intertwining the final moments of their distinct careers into one last NBA journey, though they’ll never again be what they once were. Nash will likely retire after the upcoming season, confessing his desire for one last pay day. Bryant, ever the maniacal competitor, seeks to silence his doubters. He could enjoy a return similar to Dominique Wilkins, who recovered from a torn Achilles to the tune of 29.9 points and 38 percent three-point efficiency. While Bryant’s numbers remain to be seen, he’ll certainly be an improved version of last year. He’ll likely surpass Michael Jordan for third on the all-time scoring list, brandishing his already-masterful post game along the way. Having former teammate Byron Scott on the sidelines will be an admitted welcome sight for Bryant, granting him a familiar face during the closing act of his career.

No matter their respective motivations, Nash and Bryant will prepare for their 18th seasons understanding how close the end is, taking everything one step at a time. Though their pairing won’t match expectations of seasons past, maybe a third attempt can count for something, even if they won’t recapture everything. Maybe, just maybe, there's enough lightning left in their bottles to embrace the amazing in their careers one last time.