The Lakers seem confident they'll be able to re-sign Pau Gasol this summer, and he's become the center of their proposed future with Carmelo Anthony and Kobe Bryant.

Pau Gasol is at the center of the Los Angeles Lakers world once again. The two-time champion hit unrestricted free agency July 1 and it seemed all but a forgone conclusion he'd take his talents elsewhere, perhaps even South Beach. As the Lakers pursue two of the prized players hitting the open market over the next two summers, all signs point to Los Angeles' proceeding with confidence Gasol will return if they land superstar talent.

Gasol's inclusion on the team, along with No. 7 pick Julius Randle and Kobe Bryant, has been the vision Lakers general manager Mitch Kupchak is painting for Carmelo Anthony and LeBron James. That, along with the longterm financial flexibility the team will have, caught James' agent's attention and has made them a "serious contender" to land Anthony, according to ESPN's Ramona Shelburne and Chris Broussard:

While the Knicks remain confident in their chances to convince Anthony to return to the Big Apple, the Lakers' pitch -- of teaming Anthony with Kobe Bryant, Pau Gasol and prized rookie Julius Randle on a team with no long-term salary obligations -- made what one source described as a "strong impression" on Anthony, who is living and training in Los Angeles this summer, and has made his decision over the holiday weekend "tough," according to another source close to the situation.

Los Angeles met with LeBron James' agent, Rich Paul, on Friday, and the four-time MVP is giving similar consideration to what the Lakers have to offer, according to sources.

Kupchak reached out to Gasol hours after free agency kicked off, and has already met face-to-face with him. The extent of their discussions is unknown, but the front office is projecting a future that extends Gasol's seven-season stay in L.A.

Gasol had a rough star last season, looking out of sync and shape after spending the off-season recovering from knee procedures. A team filled with veteran's minimum players had to over rely on Gasol at times, and defenses had an easier time dealing with him in the low-post without a player like Bryant creating shot opportunities or drawing attention away from him.

The end result, though, was a clear bounce-back season. Gasol's Per-36 scoring and rebounding numbers were the best since the 2007-2008 season -- the year he joined the Lakers: 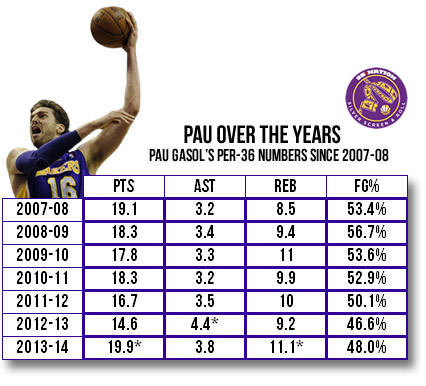 He wasn't as efficient a scorer as he was during the Lakers' championship runs, but he was a productive player. More importantly, he put a horrendous season next to Dwight Howard behind him.

The Lakers are acting from a position of need with Gasol. They don't have a player that resembles a starting quality center. Robert Sacre isn't even ready to be the first big off the bench, and the free agent big man class leaves much to be desired. The second-best realistic option, outside of Gasol, might be Emeka Okafor who hasn't played basketball since Apr. 15, 2013 after being diagnosed with a herniated disc in his neck.

Are the Lakers pulling into the lead for Carmelo Anthony?

Gasol, on the other hand, will have choices galore to pick through. The Chicago Bulls are interested in adding him into their frontcourt rotation, giving him the type of systematic stability he's missed since the Lakers' last championship run. The Oklahoma City Thunder would love to discuss a sign-and-trade to land the piece that could put them over the top. The New York Knicks, read: Phil Jackson and Derek Fisher, can already envision how they can get a head start on instilling the triangle offense, while bringing back Anthony, if Gasol heads to Madison Square Garden. Anthony sees it too, as he reportedly sought out Gasol on his own to discuss a future together in New York,

Is a return to the Lakers really the best thing for Gasol? From a basketball perspective, it's not hard to see any of those options as a very appealing opportunity. The Lakers and Gasol's relationship has been on a downswing, amplified by the discord with former head coach Mike D'Antoni over the last two seasons. How does the chance to play with Bryant, Randle, X superstar, and a question mark at point guard sound in comparison? Probably not that bad, contract pending.

The Lakers, despite an eternity of rumors, never wound up trading Gasol after the Chis Paul veto. Los Angeles had opportunities to send him off last season but held on to Gasol's expiring contract, refusing to trade him for straight salary relief while teams like the Phoenix Suns and Cleveland Cavaliers leveraged to land him. Does that count as something akin to loyalty to Gasol?

Gasol doesn't represent a cure-all for the Lakers frontcourt. His mobility on defense has been problematic for years, and the Lakers are trying to integrate a rookie power forward expected to play a significant role on the team immediately. Bryant can't be expected to show up as a better defender than he's been over the last few years, and if Anthony does come along, there will be serious questions about how that unit can defend. The proposed lineup will take a lot of figuring-out for any of the head coaching candidates still available for Los Angeles, without even mentioning the "other" side of the ball.

As it has been for years in Los Angeles, Pau Gasol stands at the center of what the Lakers are trying to accomplish. The embattled big man might not be the savior traded from Memphis he was years ago, but if the reports are true, he's still a ray of hope for the Lakers. After years of rumors, the Lakers need him just as badly as they did back in 2008.

Whether he needs them, and whether than even matters, will be answered soon enough.