What Ed Davis brings to the Lakers

Ed Davis signed a bargain deal with the Lakers, and he could be a steal if his per-36 projections stick.

Share All sharing options for: What Ed Davis brings to the Lakers

The Los Angeles Lakers roster has finally taken shape and no longer consists of only Kobe Bryant, Steve Nash's corpse, and Robert Sacre celebration gifs. Now, we can finally begin to evaluate how players can contribute within the context of this team. This will become even more clear once the coaching situation reaches it's surely to be agonizing conclusion, but I digress.

The conclusion among most of the Lakers, and NBA, internet seemed to be one of disbelief when news was broken that not only had the Lakers signed Ed Davis, but that they had signed him to such a team favorable deal (two years, $2 million). The former Grizzly and Raptor was a per-minute stat darling, but has been trapped behind veteran contributors during his time in the league. It was a widely held belief among NBA observers that in free agency, Ed Davis would finally get a larger contract and role. This led to some bewilderment when the Lakers were able to snatch Davis up on such a cheap deal, This sentiment is echoed in the quick analysis I sought from our sister site Grizzly Bear Blues' managing editor Chris Faulkner (@FaulknerMemphis), who was generous enough to give his thoughts on the Davis signing, as well as some instant analysis on what Lakers fans can expect from Davis:

When I heard the deal at which the Lakers acquired Ed Davis I spent a good hour collecting my jaw off the desk, very high-reward/low-risk. Ed was on the verge of a breakout season, so we all thought, but the Grizzlies just couldn't give him the playing time he needed to carve out a role under first-year head coach Dave Joerger. Davis has some elite physical skills that allow him to defend very effectively at the rim (his numbers are up there with Serge Ibaka), and he can be remarkably efficient when he finds his groove. Problems arise for Ed when he loses focus and finds himself in poor position on either end of the floor, something that has lead me to question his basketball instincts at times. He doesn't have the prettiest touch on the ball (you'll become nauseous when he's at the FT line), but can somehow reel off games where he goes 8-11, 5-6, or likewise from the floor. Like I said though, he's going to be most effective with 20+ minutes a game -- something the Grizzlies gave him only 20 times last season.

Thanks Chris, and be sure to check out Grizzly Bear Blues if you need any Grizzlies coverage or analysis.

Chris was spot on in his analysis of Davis and Ibaka having similar rim protection numbers, according to NBA.com. Ibaka allowed opponents to shoot 43.9% at the rim, with Davis allowing a similarly sterling 43.3%. Caveats apply, given Davis's more limited sample size (15.3 minutes per game in 63 gamses  versus 33.2 in 81 for Ibaka), as well as the fact he was presumably playing against second-unit players for a larger percentage of those minutes than Ibaka. Regardless of the circumstances those are impressive rim protection numbers at the NBA level, which was one of the biggest weaknesses of the Lakers'' shameful defense last season.

Will this be the worst Lakers team of all time? Final Summer League observations

On the offensive side of the ball, Davis also brings many of the strengths that you would hope for from a big, which pop out when looking at his shot charts from NBA.com: 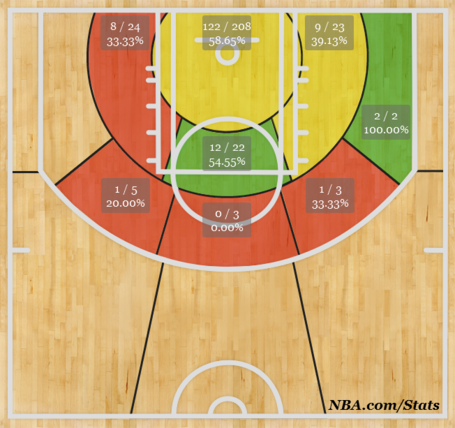 While the amount of red in this chart (signifying a below average shooting percentage from this quadrant) does not immediately lead one to believe that Davis shoots a productive field goal percentage, the vast majority of his his shots came at the rim, which you can see from his shot distribution chart here: 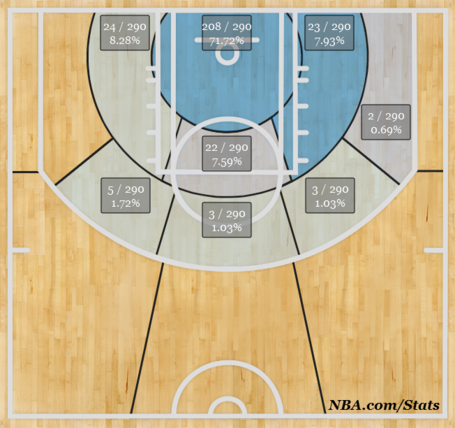 The man knows his strengths, shooting 71.72% of his total shots at the rim, where he converts an effective 58.65% of them. His ability to get and convert his shots at the basket, while taking the bare minimum anywhere else, is an appealing aspectof his game. Now that we have seen #RandlesHandles, Davis's shot chart also makes me salivate at the 4-5 pick and roll possibilities between these two young big men in addition to Ryan Kelly. Considering the Lakers are projected to be rebuilding, they could do a lot worse than experimenting with various pairings of this big man triptych.

Davis's Per-36 minute numbers from Basketball Reference are also very strong, as one can see here:

It would appear that  Davis could top out as a 13-14 point scorer (on a 50+% True Shooting Percentage) that gets around 10 rebounds per game, which are pretty good numbers for any big. These are stellar numbers when you factor in that the Lakers will be paying him just $1 million for the year, otherwise known as the change in the bottom of Jeanie Buss's purse. That he has the potential to do all of this while also protecting the rim at an elite level is just the icing/gravy (but not both, that would be gross) on top. The cheapness of this contract, in addition to the Lakers' logjam in the front court, could also lead to Davis being trade bait for a contender who's big went down before the trade deadline, if he produces close to the production expected of him.

This is a big year for both Davis and for those corners of the internet that have spent their time arguing over his value. One would have to think hope that whoever the new Lakers coach is, they will give Davis a larger role than he was able to attain in Memphis or Toronto. On a Lakers squad with likely very little to play for, young talent like Davis that could potentially be a piece of the future should be getting plenty of playing time, and Davis is exactly the type of player the front office should be taking a chance on, especially at this price.

For Davis, this is a golden opportunity to show that it was not for lack of talent that he was playing limited minutes previously in his career, just the fact that he was stuck behind more established veteran talent. After looking over the numbers, I certainly believe it was the latter, and that Davis will have a nice year for Los Angeles.