Getting to Know the Lakers Summer League Squad

Diving deep into the depths of the internet to discover some fun facts about each Lakers Summer League invite.

Share All sharing options for: Getting to Know the Lakers Summer League Squad

Even now that LeBron has decided to return to the Cleveland Cavaliers, Carmelo has reportedly eliminated the Lakers from consideration as his free agency landing spot, and with this morning's trade for Jeremy Lin's contract, the Los Angeles Lakers roster is still highly uncertain for next season. With only a few players all but guaranteed to be suiting up for the purple and gold on opening night (Kobe Bryant, Steve Nash, Lin, Julius Randle, Ryan Kelly, and Robert Sacre), the front office has its work cut out for it with at minimum 6 open slots left to fill, 9 if the Lakers are going to carry the full 15 players allowed.

One roster that is set in stone is the group of guys the Lakers will be sending to Summer League, and this is one pool from which the front office will likely be drawing players from for the final roster, or at the very least training camp bodies. If expectations hold, it is likely that very few of these guys will have significant NBA careers, otherwise they would not be playing in summer league. Rather than trying to analyze which one has the most potential for a "breakout" campaign, or which ones will get training camp invites, or who will make the regular season roster (Ben already had that task on lock anywyay), this post is about giving a little bit more information on each of these players. Having this information may be of little use for making future prognostications, but it can make watching these games more fun and engaging.

Note: Kendall Marshall and Julius Randle were not included in this piece, Randle I already covered, and we all got to know the Chipotle loving, binge tweeting Marshall last season.) Also, as Trey Thompkins and Scott Wood were not included on the original roster released, they were excluded as well.

With that out of the way, Coach Madsen, do you want to get us started?

JC: I’m part Filipino and I’m looking to be the first or one of the first Filipino-Americans to play in the NBA. I know the country is backing me. I hope to be able to visit there in the future.

I have a chip on my shoulder any time on the court, by myself or at a workout. I try to go hard. I know I wasn’t heavily recruited or played in big all-star games. I feel I have to prove myself to people every time out on the court.

"Quote of the night: Xavier Gibson on the team's entrance in a stretch Hummer limousine and fireworks: "We came in with a lot of style, came in with a Hummer stretch limo. Every year it gets a little bit better."

Yup, the Lakers definitely need to do this.

And this as well:

This dude is ready to be a Laker, although he may have to cut out the Roscoe's if he wants Grass-Fed Tim's approval.

He knows his NBA dreams have not been enhanced by the Loyola Marymount brand.

"My mom said, ‘Dad wouldn't have wanted you to do that,'" Kane said, referencing a conversation he had with his family about quitting."

... had taught his son the game, urged him to practice, beamed at DeAndre’s successes and was always willing to lend a hand when it came to tuning up the mechanics of his shot. But in an instant, he was gone, without even a chance to say goodbye.

"Without my dad, none of this is possible," Kane told Sporting News. "He was the one who put the ball in my hands as a kid. I know he is up in heaven watching down on me and happy, smiling down. I am happy to be doing this, for him. Every day I step on the court, I am doing it for my dad, so this is all for him."

"In July 2006, DeAndre and one of his best friends, 20-year-old Antonio Hampton, went to a party near West Park on the North Side. But not everyone at the party welcomed them. Pittsburgh offered a dangerous combination of drugs, violence, gangs and guns. Calvin preached for DeAndre to make good decisions, even as Calvin struggled at times to remain on the right side of the law."

Tensions rose. They left the party. They started running. Faster and faster they sprinted. Gun shots rang out. DeAndre, 17, ran side-by-side Antonio until he saw Antonio fall, thinking his friend was dropping to the ground to best avoid the gunfire.

But Antonio never got up.

When the shots stopped, DeAndre backtracked to find his friend and saw what happened. Antonio had been shot in the head.

"He was on life support for a while," DeAndre says. "But he was a vegetable. His mom came and they pulled the plug. That was hard, growing up, and seeing one of your best friends shot in the head, dead right there."

"While at Marshall, he was looked at as selfish and someone who picked up too many technical fouls. Once arriving at Iowa State, Kane made a concerted effort to rid himself of that label."

"We did not have any issues with DeAndre ... I had him for one year, and I had no issues in that time span. He didn’t even have a technical foul."

If Kane can break through, and based on the Lakers lack of point guard depth he would seem to have a shot, he really has the potential to be one of the feel good stories of the Lakers season. It is always inspiring to hear of someone who has overcome so much adversity to get so close to achieving their dreams. Kane seems to have dealt with more than his fair share of loss, and it would be great to see such a grounded, well-rounded guy do well and at least get a shot at a training camp invite.

Lettsss gooo!!! I have a feeling she might call me on stage tonight. I practiced in the shower just in case pic.twitter.com/SYQySYiNCW

Lol this man @DHicksx3 fell asleep in the middle of yoga. He was scaring this lady next to us because he was snoring so loud.

Man will someone get Embiid off the screen so I can stop getting text from ppl saying we are Twins!!! Lol

I taught her well lol She was chewing on that piece for like 10 minutes pic.twitter.com/JVGrDNdhcv

She said she would watch the game with me for Father's Day and 2 minutes into the game and she's sleep smh pic.twitter.com/hAp3JkvDwb

"Reminds me of: Nick Young"

Wooldridge, on the other hand--despite already beginning his European career--had a goldmine of available information.

"He is a hip-hop artist/writer/producer who performs under the moniker of "SB Babyy" and as a freshman founded his own independent record label called "Swiperboy Entertainment." His hip-hop twitter account, @Swiperboy, is verified."

I am really glad that they made it clear that his twitter account is verified, otherwise it would have been hard to take this whole thing seriously.

Orlando Woolridge must have had some big friends in the Lakers scouting department for his son to get on the Lakers' SL team again.

Orlando Woolridge must have had some great friends in the Laker front office since it's hard to explain the inclusion of his son Renaldo on the Lakers' summer league team for a second straight year as anything other than a big favor to him. A bit player even in college, Renaldo only saw token minutes last year in Vegas and this held true during his time in Serbia as well. Regardless of the roster construction, he probably wasn't going to play one way or another, but with Randle, Mbakwe, and possibly Smith ahead of him in the rotation at the four, all Woolridge can hope for is a handful of cameos and perhaps catching the eye of his next employer overseas.

This is a debate about whether Roddy B should:
*Be viewed by virtually all observers -- when he plays -- as a precocious and unusual talent
*Be on a team that’s played 70 games
*Be DNP’ed 25 times in those 70 games.
*Be given fewer than three minutes in games 10 other times. …
Meaning he’s been a Rookie-of-the-Year-level performer in a full and exact half of Dallas' games. ...
And been a non-rotation player in a full and exact half of Dallas’ games.This isn’t Montana vs. Young.
It’s not even Roddy B vs. Kidd.
This is about a potential difference-maker who – for reasons that Rick Carlisle is in charge of knowing – is rendered invisible in 50 percent of his team’s games because the Mavs opt to play other backup players instead. 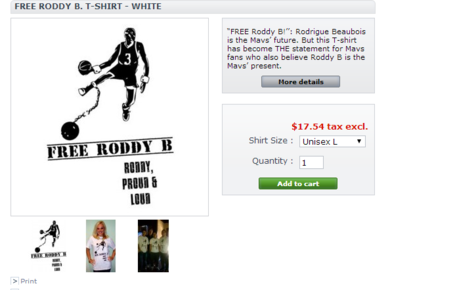 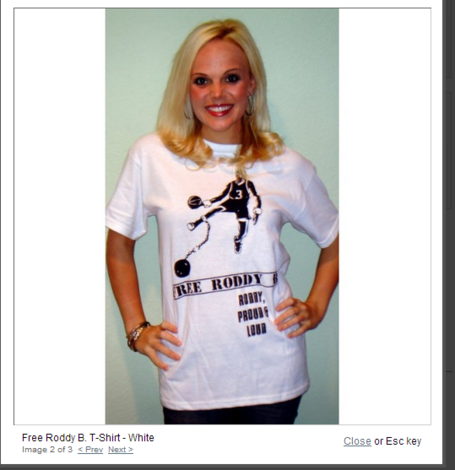 For a unique collectible, that shirt looks like it can still be yours for $17.54! Bonus fan points for anyone who wears it to a Lakers summer league game. The "Roddy B" era was pure, unchecked optimism, which our sister blog Mavs Moneyball does a good job summing up here. 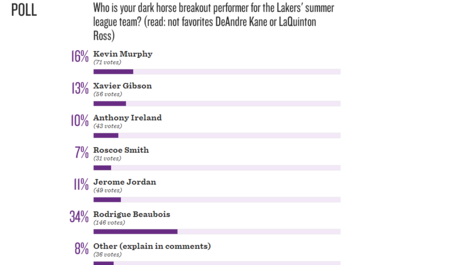 As a Jamaican, what does it mean to represent your country in the NBA?
Just coming here and working hard and trying to make your country proud – doing the right things, playing the right way and doing whatever it takes for your team.
One of the Knicks’ greatest players – Patrick Ewing, was born in Kingston. Is that something you’re mindful of?
I had the pleasure of meeting him a couple of games ago for the first time, and heard a lot of things about him. Obviously I’ve seen him play — he’s a great player – I just want to come out here and make my country proud.
How much has basketball developed in Jamaica?
I think it’s developing. It’s a little slow, but it’s developing for sure. Me and Samardo Samuels in Cleveland, and there are a couple of other guys in college and high schools. I think it’s growing — its on the up.

"We would do much better with [Roy Hibbert]. But the good news is that we have a lot of big men like Jerome Jordan, who could have come off the bench behind Roy," Williams said.

I love that his bio mentions specifically that he "has 3,500 songs on his iPod". Is that an exact count or an estimate? How frequently is that updated? Did he buy all of those songs on iTunes or use a 3rd party download service? Do all Tulsa players have their iPod song counts listed? (No. I checked).
Jordan will truly have to be a "Jamaican Sensation" in Summer League to warrant a roster spot going forward, but he will most likely be one of many unique characters participating in the NBA's annual talent evaluation extravaganza in the desert.
The reality is that after summer league, we will likely not hear of many of these guys again, but hopefully learning a little bit more about them can make the games, which can often get pretty ugly, a little bit more interesting. At the very least, you can impress your friends by citing the amount of songs Jerome Jordan has on his iPod if he has a big game.
--@hmfaigen--