Looking at one of the less splashy, but still worthwhile, additions the Lakers could potentially make this summer.

Thus far, all of the leaks and rumors coming out of Lakerland seem to indicate the Lakers' free agency plan is to chase the glitziest names possible on the open market. LeBron James. Carmelo Anthony. Maybe both. Barring some incredibly unlikely dominoes falling in line (LBJ and Melo both agreeing to take less than their max, both of them deciding they want to play together and that LA offers them the best place to do that, etc.), the Lakers will have a ton of roster slots to fill this offseason. As a matter of fact, even with those two, the Lakers will still have a lot of holes to fill, they will just have a whole lot less money to throw around.

Midnight struck on the East coast, clearing way for Mitch Kupchak and the Lakers to being their free agency process. Here's a recap of the Lakers' first batch of moves.

This piece is written under the assumption neither of those two "big fish" puts on the purple and gold armor next year (sorry to burst anyone's bubble), and is just examining the Lakers roster as it exists today. For a refresher, here is the most likely lineup (with the recent news that the Lakers did put in a qualifying offer on Ryan Kelly, making him a restricted free agent and thus almost certain to return excepting something nutty):

I am as big a Sacre fan as anyone, but if the plan is for him to be starting center for the season opener, then the Lakers are tanking to keep that pick they owe to the Suns if it is outside of the top 5. Thus, starting center is a position of need that the Lakers will most likely address in free agency, given that they have shown every indication of wanting to be competitive this year, one of Kobe's (presumably) last two before retirement.

If these assumptions are all correct, what should Mitch Kupchak and the rest of the front office be looking for in a starting center? Looking at the roster, another safe assumption to make is that the only two guaranteed starters right now are Kobe Bryant and Julius Randle, both of whom will be setting up shop in the post for most of their offense. Additionally, with Randle being too small to man the 5 position for any extended stretch, if at all, the ideal center to play with them should:

Therefore, of the available free agents, one name to look at could be Channing Frye, who checks three of the four aforementioned boxes (he is not a traditional rim protector, although he did put up decent block percentages the last two years, 3.0 and 2.1).

Frye has a reputation as a defensive liability, which is somewhat justified given his career defensive rating (estimated points allowed per-100 possessions) of 108. However, one has to keep in mind he has not only improved in recent years (putting up a 104 and 107 in his last two seasons), but he also unlocks so much for a team on offense that it mitigates his defensive harm.

I am not necessarily advocating that Frye be playing 30+ minutes a game for the season, which he has never done, but just that in a time share with another, bulkier center, he could do some great things for the Lakers' offense. In Frye's last four seasons, he has had a higher offensive rating than defensive rating, and last year posted a plus/minus rating of +3.6, according to his Basketball Reference page. The Suns were also much better with Frye on the court than they were with him off. Per NBA.com, while Frye was on the court, Phoenix posted an OffRtg of 110.4 (the league leading Clippers had a 109.4) and DefRtg of 104.4 (which would have ranked between 15th and 16th). When Frye was on the bench, the Suns OffRtg was 102.5 (which would have still outranked the Lakers 21st rated 101.9) and their DefRtg was 103.0 (which would have tied for 13th rated with Houston over the course of a full season). That was a lot of numbers, but in summation, Frye's team was -7.9 points per 100 possessions worse on offense, a precipitous 20 spot drop in the overall rankings, with him on the bench, and only 1.4 points per 100 possessions better on defense (either would have been around league average). So it is clear that he was much more of a boon to his team's offense than he was a burden to its defense.

Sometimes raw numbers cannot paint as clear a picture as, well, pictures can. For example: 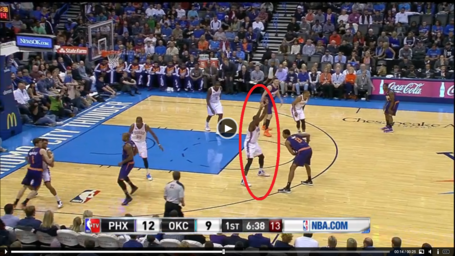 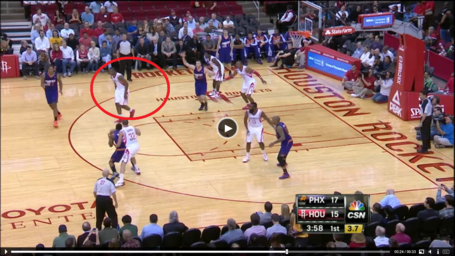 In those 2 screenshots from NBA.com, look at how far Frye has brought his man (one of the other team's bigs) out of the paint! Then, imagine what Randle or Kobe could do down in the post with one less long-armed potential shot-blocker around. This type of "stickiness" is incredibly valuable to any offense, and after watching tape, most teams seem to respect Frye enough to not leave him alone for any prolonged period. Frye's shot charts, again from NBA.com, offer additional promise: 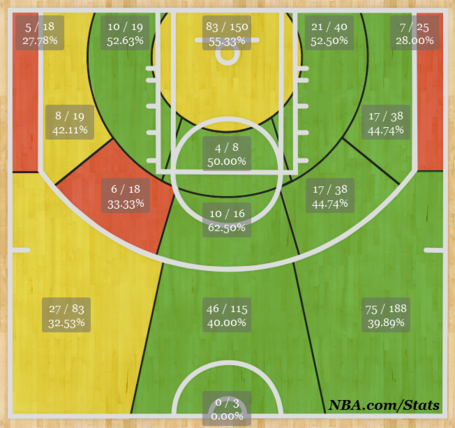 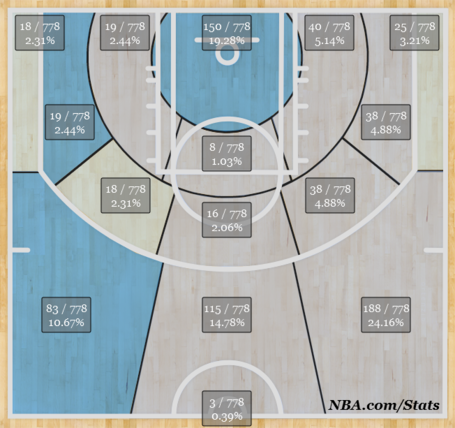 By looking at the percentages in the first chart, we can see smart teams would be able to help off of Frye if he is stationed in either corner, where he shot below 30%. But, from the chart on the bottom, it can be seen that Frye seems to be aware of this weakness, with only  about 5% of his overall shots coming from the corners. From everywhere else other than that left wing midrange though, Frye shot above or around the league average, demonstrating why teams consider him so threatening and had to stick to him, which over the course of the year created many more open driving lanes for the likes of Eric Bledsoe and Goran Dragic, both of whom only semi-coincidentally had breakout years this past season.

Frye does shoot a lower percentage (55.33%) around the rim than you would like to see from a 7-footer, but he more than makes up for it with his percentages from the two wing and center three-point areas, where he shot a very good 38.34%. This level of shooting ability, particularly for a team like the Lakers that is absolutely STARVING for anyone with the ability to a hit a three, would be a coup, especially getting it from a center, which would allow for Kobe and Randle to operate out of the post as they like while still keeping the floor closer to properly spaced if Mitch can add another wing and point guard who can shoot as well.

The Lakers' interest in Chris Bosh (who would be the perfect center to play next to Randle and Kobe) shows that they understand this need for more spacing in the starting lineup around their two current cornerstones. Channing Frye on his own would in no way solve all of the Lakers problems, but his signing could definitely move this year's Lakers squad closer to competitiveness, without jeopardizing flexibility going forward.