Some fun facts and general information about the incoming rookie whom the Lakers selected with the seventh-overall pick in the 2014 NBA Draft.

Share All sharing options for: NBA Draft 2014: Getting to know Julius Randle

Like many Lakers fans, I went into the draft with a fair amount of trepidation and anxiety. Would the Lakers trade the pick? Would Embiid fall to them and be the next Greg Oden? (For the record, I would have gambled on him anyway, but this was still a fear). These questions and others like them raced back and forth in my mind until the agonizing wait was finally over: the Lakers pick was in. And then:

The more I have heard and read about Julius Randle since binge Google searching him after his selection, the more I cannot help but fall in love with the guy. Here are some fun facts and interesting pieces of information on the newest Lakers lottery pick:

He is more athletic than you think

From Kevin Ding's post draft profile on Randle "[his] 35.5" vertical at the NBA Draft Combine was the same as what Blake Griffin posted there." While this does not necessarily mean that he will be devouring Kendrick Perkins's soul anytime soon ...

(Yes, I will use any excuse to play that video)

... he can still get up there more than his ground-bound, Zach Randolph comparisons would suggest. He even won the Elite 24 Dunk Contest in high school with a behind the back jam!

He wanted to be a Laker

First, he skipped a workout with the Celtics (6th overall pick) to do a GQ photoshoot, earning instant cult-hero status in Lakerland. Then there was his visible exaltation at his selection by the purple and gold.
A stark difference from the reaction of Zach LaVine, who is still cursing his fate of being Minnesota-bound somewhere in the depths of the Barlays Center.
Finally, to fully cement his status as a fan favorite in Los Angeles, he tweeted this:

Oh y'all didn't know I grew up a LAKER fan? http://t.co/Dsjx8zBknf

Later on a conference call with the media he stated that "It's the organization that I wanted to go to...I couldn't be a in a better situation for me and I'm just really excited to get things started there."
If it weren't against the CBA, I would say we should sign him to a Magic Johnson style 25-year contract.

Kobe gave him an approving nod

He is already unafraid to speak his mind

This may not be a plus for everyone, but I have always appreciated athletes who do not hold back when speaking with the media; it is part of why I have such an affinity for Kobe. Therefore, I thought it was awesome when Randle stated "I think I should've went higher for sure, but you know, the teams that passed on me will regret it," You have to love that sort of confidence.
Further examples of this brashness with the media can be seen when he went right at noted #WOJBOMB dropper Adrian Wojnarowski, who had broken news of a potential problem with Randle's foot causing his stock to drop, leading Randle to respond:

I never do this but it was brought to me and it's crazy how people put stories out there and have no clue what they are talking about.

When you come at the King, you best not miss, and Randle didn't, putting his money where his mouth is in a workout for the Lakers that was impressive enough for Jim Buss to come down from the bleachers and shake his hand individually afterwards.
When pressed by reporters after said workout about whether his foot was healthy or not, Randle responded "'Did it look it?' Randle asked rhetorically after showing off his accuracy in a series of shooting drills in front of reporters. 'There you go.'" If you replaced "Randle" with "Bryant" in that statement, you would think those reporters had just asked Kobe about his knee.
He also was not shy when asked after that same workout where he would rank himself among his fellow draft prospects "I feel like I’m the best one...I don’t put myself second to anybody. That’s my attitude on the floor and my attitude when I compete. It’s how I was raised to be."
It may not translate to the court, but for now, that type of self assurance is exactly what the Lakers need from their players during a down period for the storied franchise.

But he has a softer side as well

According to Bleacher Report, Randle wears the number 30 because it was the same one that his mother wore during her college basketball career. Basketball has always been a family affair for Randle, per this awesome nugget from SI:

"That group included Annie Page, grandmother of Julius Randle, the Wildcats' star forward. Page lives a five-hour drive away, in Newton, Texas, and in Randle's early years, she visited often. 'That boy just wore me out,' she says. All Randle ever wanted to do was play basketball, and he would wake up early in the morning, knock on his grandmother's door and summon her outside. 'Granny! Time to play!' he would say, and she would be out there, minutes later, on the court.'

So between Randle and the (hopefully) resurrected Black Mamba, we now know that this next Lakers team will be imbued with not only an obvious love for the game, which last years squad did lack at times, but a hard nosed, I'm-going-to-beat-your-ass competitiveness that was definitely lacking in 2013-14. By the end of the year I predict he is going to have us all yelling: 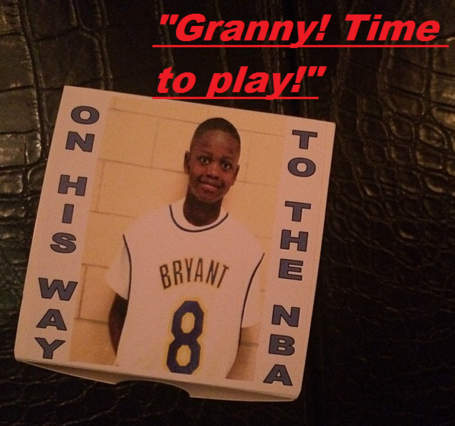