Lakers free agency: Patty Mills could be a cheap option for L.A.

Patty Mills is going to enter free agency coming off of the best year of his career. With tons of roster spots to fill, should the Lakers give him a call?

Share All sharing options for: Lakers free agency: Patty Mills could be a cheap option for L.A.

Patty Mills is coming off a scintillating performance in Game 5 of the NBA Finals and is roaring into free agency this summer. The Aussie point guard came off the bench with 7:01 left in the third quarter, when the game was still in doubt with the Spurs leading 54-42, and was en fuego, turning a heretofore competitive bout into a romp. In the next 5 minutes or so of game time, Mills scored 14 points to grow the Spurs' lead to 17, knocking down three after three while probably earning himself a raise for next year. This scorcher was preceded by the best season of Mills' career, presenting himself as an asset any team would love to have (and now will have the chance to bid on). Soon, instead of waving towels, Patty Mills will be waving bags of money around his head all the way to the bank. Should it be the Lakers filling up those bags?

First, the elephant in the room: contract year. While this is a legitimate concern for front offices to have about some free agents, Mills does not seem to be one of them. The numbers do not paint the picture of "contract year gunning." When looking at Mills' statistics this year as compared with other years he was in the league, they are not that aberrant from the norms he had established for himself. While narratives are nice, the classic trope of a player doing the same things he's always done, but this time was in a role and position he could flourish in, seems like the plausible explanation.

Nick Young will test free agency this summer but could come at a discount for the Lakers.

Carmelo Anthony is expected to test free agency this summer. How will this affect the Lakers, and opening thoughts on the prolific scorer.

Mills' improvement was definitely real, just maybe not to the degree that it was played up. Per 36 minutes he cut down on his turnovers, while raising his steals and rebounds. Additionally, just looking at his last two years is San Antonio (cutting out the first "season" because he only appeared in 10 games), Mills' improvement was stark.

He raised his points per game, cut down on fouls and turnovers, raised his steals, assists, rebounds, free throw attempts and percentage, and three-point attempts and percentage. Some of these improvements are only slight, yes, but with this many things trending upward it does point to additional work or some other change for the player, be it that he was in better shape this year, natural age-based improvement (he's only 25), extra comfort with the system, other factors, or all of the above. In summation, Mills did improve. How much is debatable.

Although Mills' numbers do not seem to be a red flag, that does not mean his resume is free of them. For one:

Pop, as always, succinct when asked why Patty Mills didn't play more last year: "He was a little fat ass."

Should teams that are considering making him an offer be wary that he will resume eating up the entire outback once he has guaranteed money? It's impossible to prognosticate with certainty, but it is something for teams to be aware of.

Another factor the Lakers, or any suitor, will have to consider before signing Mills is how his particular game fits with their roster. The Lakers, regardless of whether Steve Nash plays out the year or is stretch provisioned, will need a point guard. Los Angeles also holds a rare lottery pick this year, the 7th for the zero of you who were not aware, and many of the likely candidates slotted there are big men. If they have their eyes on one of the forwards available, Mills could be an enticing option for the front office to consider to shore up the position.

More important than positional designation, however, is how Mills' particular strengths and weaknesses would fit in with this Lakers roster. Pending the hire of a coach, only so much can be known about what style of play the Lakers will be attempting to play. At minimum, we know for a guard to play alongside Kobe in the backcourt, they have to be able to play both on the ball (to lessen his creation burden as he ages) as well as off the ball (to space the floor around him). Mills has demonstrated both of these abilities. He was a stellar three-point shooter over the course of the season, as demonstrated by his playoff and regular season shot charts. 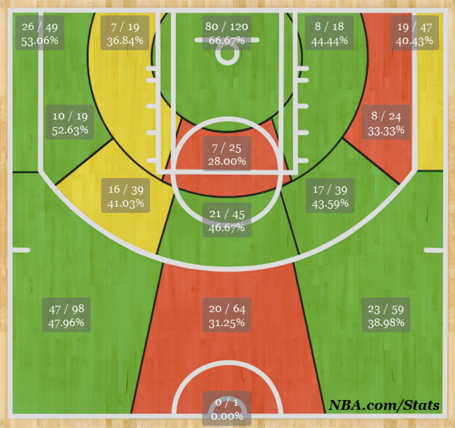 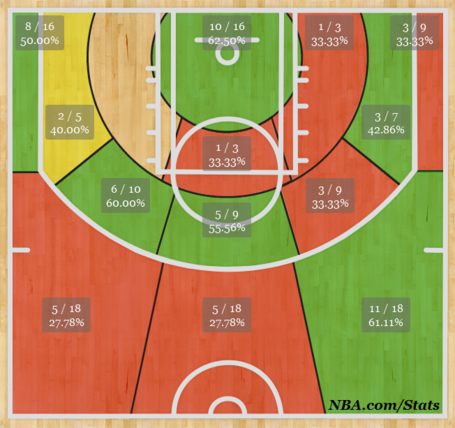 Mills' three-point shooting is obviously an asset. His ability to stretch the floor would create some much needed spacing for a fairly constipated Lakers offense. As an added plus, Mills showed an ability to finish at the rim, something that was sorely lacking among Lakers point guards for the majority of last year. Finally, he shot around or above the league average for the majority of areas on the floor in the regular season.

These shot charts are not all sunshine and rainbows, however. Mill's average shooting did fall off in various areas during the playoffs, probably due to defenses being more able to key in on him while preparing for only one team. Also, Mills' mid-range game leaves a bit to be desired, and he would probably be better off curbing his appetite for such shots. An area Mills needs to improve in is his lack of free-throw attempts, but given that he finishes so well around the rim anyway (taking 18% of his shots there, by far the highest percentage for him anywhere on the court per NBA.com), this is at least not a flaw that limits his aggressiveness in going to the basket.

Some might look at Mills and/or read his measurements and fall prey to the thinking that he would be a defensive liability due to his small stature, but from my observations this simply did not seem to be the case. Mills is an active, aggressive, and attentive defender within the context of the Spurs' system, an improvement which at least in part led to his increased role and playing time this year. The numbers backed this up, with Mills posting a Defensive Rating (points given up per 100 possessions) of 104, the lowest of his career and lower than the league average Offensive Rating of 106.6. At the bare minimum he can lock in and try on defense, another upgrade on much of the guard play for the Lakers this past season.

Another feather in Patty's cap is the fact he will likely be a more affordable option than some of the other point guards on the market. Per Ben's excellent Lakers salary cap guide, the Lakers only have a little under $12 million to spend on multi-year contracts if they want to conserve their ability to offer the 30% max next summer. This could make Mills a more realistic option than more popular and bandied about free agents like Eric Bledsoe (restricted, Suns will likely match) or people's hero Kyle Lowry (GETTING PAID, SON!).

For all of these reasons, Patty Mills would appear to be a solid free agency grab for Mitch Kupchak and the front office. Plus, as a relatively young 25 years old, he is the type of piece that could not only contribute during Kobe's remaining years, but continue to remain an asset into the next era as well. As hard as it is to foresee San Antonio letting Mills get away, perhaps the promise of a starting role, in addition to the city's other lures could be enough to entice Patty to suit up in the purple and gold next year.