Examining Xavier Henry's year, where he can improve going forward, and if there are any more possible X-Men title puns we can get out of his name.

Full disclosure: Before this year, I do not think that I can really recall watching Xavier Henry play a second of basketball. I had heard of him vaguely, I knew that he was considered injury prone, but after not watching very much of the preseason, I had no idea what to expect when he checked in on opening night. Then this happened: 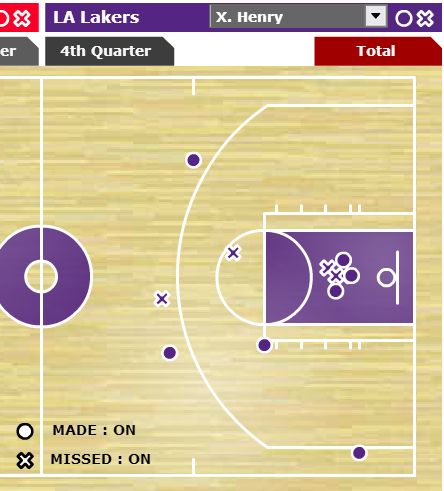 In case you cannot see that very well or simply do not remember, that was X's shot chart on opening night, when he announced himself to Lakers fans with a scorching 22 points on 8/13 shooting including 3/4 3's, to go with 6 rebounds for a +15 in his 26 minutes off the bench. I may or may not have had a friend text me that "Xavier is our next franchise player now once Kobe retires". The victory on this night was one of the few genuine feel good moments in this debacle of a season for the Los Angeles Lakers. Sadly (or happily if you were always on the tank train), Henry was unable to maintain this level of play throughout the season.

That type of production should never have been anyone's expectation for Henry though, and certainly was not what the front office was expecting. However, Henry was still able to have himself a nice year when he was able to stay healthy, improving on many of his career statistical norms, and surely buying himself at least one more chance in the league.

After re-watching more Xavier Henry possessions than is healthy for any non-scout or GM to watch, a couple things became burned into my memory:

When hearing stories about how highly thought of Henry was during the high school recruiting process, it is easy to see why. He is obviously built, and has a quick first step allowing him to often get to the rim. Once there, sometimes things like this happened:
That was fun! Tragically, finishes like that or finishes at all were less likely than misses, as Xavier more often demonstrated my next observation of:
For posterity, here is Xavier's shot chart for this season 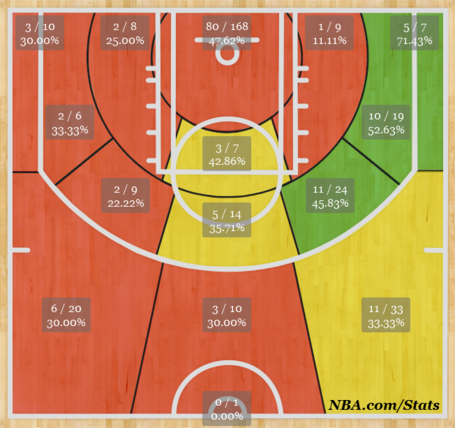 As a refresher, the colors mean that a players field goal percentage was: green (above league average), yellow (comparable to league average), and red (below league average). So clearly Xavier's shooting efficiency was that of a below average player, which should probably be expected from a player who was considered a "buy low" signing, a raw infusion of athleticism that hopefully Mike D'Antoni could get the most out of.
When watching Henry play, several reasons for his lack of efficiency became apparent. For one, he had a tendency to mistime pick and rolls, often beginning his foray towards the rim before his big had a chance to set a solid pick. This type of issue should probably be expected though, from a small forward, who was already considered something of a project, being forced to play point guard due to the injury plague wiping out LA's veteran PG platoon.
Another factor leading to the ineffectiveness of Henry's drives was that he seemed to have a hard time making adjustments to his standard plan of "barrel towards the basket and force up a shot." When driving this way, X showed his strong hands and ability to get a shot up through contact and not turn the ball over, but did seem to get his shots either blocked or tipped once it was out of his hands, a consequence of not creating enough space between himself and the big that he was challenging. He would often go right into a big man's chest in an effort to create space, but often it did not create enough, leading to these blocks or tips. Even his shots that did get through were not incredibly accurate, and finishing around the rim is an aspect of his game that he will need to work on a lot over the summer if he wants to become a more consistent contributor and stay in the league. Basically, if nearly 50% of his shots are going to come around the rim, he will need to shoot above 47.62% from there.
The other blight on Xavier's season was his continuing difficulties staying out of the training room and in a jersey on game day. While he did show a lot of toughness in playing through his wrist ligament tear towards the end of the campaign, regardless of the fact that he was likely playing for a new contract as much as showing support for his teammates, it cannot be ignored that Henry missed 39 games this year due to various injuries, adding to his reputation for being damaged goods.
If it seemed like I was not a fan of Xavier due to all these critiques, that is not the case. In the games where Xavier was on, it led to some of the few highlights of this miserable season. Off the court, who can forget his enjoyable back and forths with Nick Young, like when he tried to bum Rihanna's number off of Swaggy, demonstrating the chemistry that kept Lakers fans supporting this team and prevented the locker room from descending into chaos as so many lottery teams do. As mentioned above, he was also asked to play out of position at point guard when injuries struck, and he did so without complaint. Overall, this year Xavier Henry showed that he is a solid locker room presence with good athletic potential, and the Lakers could do a lot worse than taking another one-year flier on him as a backup wing if he is willing to come back at a similar rate.