Jordan Farmar had a solid return to the NBA and, despite the injuries, proved he can still play a major role for the Lakers going forward. It's a thin point guard market out there, after all.

Share All sharing options for: Jordan Farmar could fill role for Lakers

Jordan Farmar made his return to Los Angeles and slipped right back into a Lakers jersey last summer. The team signed him to a one-year deal and all sides seemed excited to move forward. For the Lakers, it was a chance to have an athletic point guard on a low budget contract that has some proven chops, with the bonus of the championship nostalgia. For Farmar, it was a chance to play under Mike D'Antoni -- a coach revered for his ability to make role players shine -- with a clear path to starter minutes. They needed each other then, and the Lakers will have to ask themselves if they need him again.

The team's obvious hole at point guard could be filled out by Marcus Smart, who's heavily projected to be the Lakers' pick at No. 7 in the draft. Kendall Marshall is still on an insane non-guaranteed contract that the Lakers can squash like a grape should they choose. Steve Nash can't be relied on to play five games a month let alone five games a week. Farmar may not be a starting caliber point guard, but proved he could carve out a role on the team as a perimeter threat.

Farmar connected on 43 percent of his three-point attempts and was the team's leading shooter from deep. He never cracked 40 percent in his previous stint with the Lakers, topping out at 37.6 percent in the 2009-10 season.

He was a monster at shooting threes off the dribble, connecting on 41.7 percent of all three-point shots taken out of the pick-and-roll, according to Synergy Sports Technology. Farmar made defenders pay for going over the top of or running into screens, which is crucial for a quality point guard. Not every ball-handler is Steph Curry, but a scoring point guard like Farmar needs to be able to stick those open opportunities.

The pick-and-roll is a bread and butter play for every team, so D'Antoni's absence is of little consequence. Farmar's shooting has significantly improved in other areas as well. Here's a full look of how he shot in key play-types: 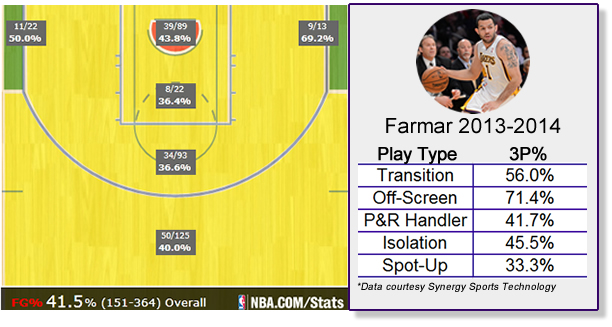 Farmar's corner-three shooting was excellent and he still shot 40 percent above the break.  He really shined in transition, shooting 56 percent on three-point attempts. His spot-up shooting is questionable, though. His catch-and-shoot mechanics seem broken and he struggles when he isn't shooting either with the ball already in his hands or is in motion. It's not a minor discrepancy, but his three-point shooting as a whole makes up for that tarnished aspect of his game.

The other glaring problem in the graphic above is his 43.8 percent shooting at the rim. Farmar isn't fast enough to blow by defenders consistently, doesn't have the strength to push to the rim and is not a good finisher. This area of his game is severely limited and caps what he can accomplish on the court.

His playmaking ability was average, and his turnovers were a serious issue. He averaged a career-worst 2.3 turnovers per game and made poor choices and struggled holding on to the ball. Farmar definitely has limitations but the Lakers don't need to ask the world of him. In a role where he's working off-ball, getting up court in transition for threes and mixing in the pick-and-roll to create offense Farmar can perform to "first off the bench" reserve level. Whether the incoming coach needs a player of that talent set is another question for another day.

Were the glimpses of old Steve Nash worth it? Randle sliding to Lakers in latest mocks

A weak free agent pool of point guards also makes this an interesting position for L.A. It's possible the team swings at a player like Kyle Lowry, who will be the most sought after free agent point guard this side of restricted free agent Eric Bledsoe, and they are comfortable with a mix of Marhsall and when-healthy-Nash covering the backup minutes. It's difficult to imagine the team signing two point guards this summer, but they definitely need one more to play along with Nash and Marshall to be safe. It also doesn't hurt to see if he can get his health right while shooting those threes.

There are a couple of other interesting names for teams to pick through, like Mario Chalmers and Rodney Stuckey, but the options are limited for the most part. It's doubtful Farmar had a successful enough season to create a market for his game after he missed significant time dealing with hamstring injuries. His performance was also in line with most bench level talent in the league. The best value for the Lakers as they piece together another bit-piece roster could be to continue mining a known quantity with valuable shooting skills in Farmar. An under the radar re-signing, if you will.

His season was herky jerky, but Farmar's return back to stateside professional basketball went smoothly. There were a lot of positive vibes when he signed his deal last summer and it carried into his season. He took a large risk by playing overseas and removing himself from the NBA scene but it's paid off. The shooting stroke he was starting to build in New Jersey seems reliable, he's seeing the court better while making plays and he can contribute to a team as a rotation player.

Will it be the Lakers? Maybe, and I'm alright with that. The thought of debating between giving the minimum to Beno Udrih or Jerryd Bayless kills me.