Should the Lakers re-sign Kent Bazemore?

Share All sharing options for: Should the Lakers re-sign Kent Bazemore?

At this year's trade deadline, the Lakers swapped veteran point guard Steve Blake for two young players on expiring contracts, Kent Bazemore and the ever stone-faced MarShon Brooks. It was one of the darker times for a locker room that was able to stay mostly positive despite all of the losing, as the team dealt with losing a favorite teammate and locker room leader. A few people, myself included, thought that this was the beginning of the end for watching any type of enjoyable basketball for the purple and gold.

Bazemore eagerly threw himself into the audition starting with his very first game against the hated Boston Celtics. He dropped 15 points to go with three rebounds, four assists, two steals along with his trademark dogged defense, and even drained some clutch three pointers to solidify a victory for the purple and gold. Soon after this breakout performance he was moved into the starting lineup.

The enthusiasm for the game that he displayed, both while playing and on the bench, quickly proved infectious among Lakers fans. He generated enthusiasm at a rate arguably only topped by Swaggy P (and wow, that sentence is sad in the grand scheme of things). Certainly nowhere on the Lakers roster was youthful potential and promise displayed with the same level of exuberance and joy as it was with Bazemore. I mean, how can you not like a guy when this is the fourth video that comes up when you search his name on YouTube:

All platitudes aside, Bazemore did improve statistically this year on the Lakers once he had a chance to spend more of his energy playing and less of it thinking up and executing elaborate celebrations. By looking at those statistics we can see how.

One can see that Bazemore did improve offensively this year in terms of his efficiency and his raw production. Per-36 minutes, his statistics stayed pretty similar to the stats that he put up while playing with the Warriors earlier in the year, and as a young player he can be expected to continue growing. Additionally, he significantly raised his Effective Field Goal Percentage, True Shooting Percentage, and Player Efficiency Rating while lowering his Turnover Percentage.

In context, both his holding steady in some areas and improving in others is even more impressive given that he was playing out of position and adjusting to a much larger role than he had previously played at the professional level. Providing further evidence that Baze' would be worth keeping around is his shot chart: 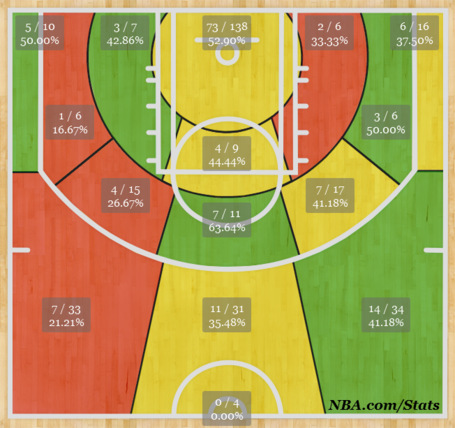 While the numbers here are not overwhelming and are an exceedingly small sample size, they are still encouraging. Bazemore shot above or around the league average from all but four areas on the floor (the red ones). In a young player who, by all accounts, seems to be a hard worker and driven to improve, this shot chart can be expected to improve as well. If Bazemore wants to stick in the league, however, he will have to improve on his finishing around the basket. Even though he shot around league average from there, a player as athletic and able to get into the paint as he is should be above average from that area.

Given that he was playing for Mike D'Antoni, after his first game I legitimately found myself wondering if we might be in for Linsanity part deux: Bazemore edition. Sadly this was not to be, but it does not mean that Bazemore did not have an effective year, proving himself a commodity worth hanging on to if the price is right.

It's unlikely the Lakers select a wing player in the draft, so Bazemore's athleticism, the way he makes himself a pest on defense and his boundless enthusiasm for the game make him exactly the type of player that the front office should be trying to retain. At the very least, Lakers fans deserve to see what type of team-up bench celebrations he and Robert Sacre can come up with if they have a full offseason to practice.