Nick Young is the song "Happy" personified as a basketball player and that translated into a very productive season from Swaggy P.

Nick Young was made for the bright lights associated with being on the Los Angeles Lakers and, as cliche as it sounds, the simplest explanation is he was born in Los Angeles. There's something about being raised on the West Coast that simply can't be explained. Something in the summer breeze, the palm trees and the bumper-to-bumper traffic that creates a certain mentality. Swaggy P, the superhero-like alter-ego he's created for himself, should be a Laker next season. His $1.2 million player option is all that stands in the way of enjoying another season decked out in purple and gold.

It's hard to explain how Nick Young transformed from being worthy of an eye roll to being the player making our eyes roll with entertainment. It's an experience watching him play basketball on a nightly basis, but for me, it all began with a simple non-basketball incident. The infamous toboggan crash:

There was something charming and hilarious -- swaggy, you could say -- about the whole scenario. The image of the Lakers riding down the Great Wall of China in toboggans in and of itself is worth a giggle. Capturing Young's fall was hilarious. His reaction? Priceless.

His energy was infectious even through the television set. He instantly joined the ranks of many cult favorites over the last decade or so, but was actually damn productive while doing so unlike those Laker folk heroes. Sorting through his possession-type statistics made available via Synergy Sports Technology shows just how effective he was while painting the court his own brand of swag. It also reveals something that's always been painfully obious -- do not allow Nick Young to create for himself under any circumstance: 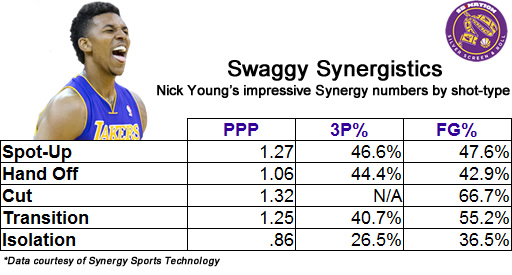 When he was working as a cog within the offense Young was a perfect weapon for the Lakers last season. He shot an astounding 46.6 percent from beyond the arc as a spot-up shooter, which was a critical aspect of  Mike D'Antoni's offense and really any offense at this point. The Lakers needed players to space the floor while running pick-and-rolls and Young was instrumental in providing an outlet as the secondary option.

Perhaps most surprising is how well he shot the three-ball in transition. I hammered on this aspect of his game before the season started, noting that he shot just 18 percent from deep in transition last season with the Philadelphia 76ers. Raising that percentage up to 40.7 is astounding and proof that a different system and fresh slate can help a player raise their game. It's also a nod to D'Antoni's well-chronicled ability to get the most out of wing players, especially when the team is pushing the pace.

Keep him moving and he'll provide efficient offense and three-point shooting. Let him control the offense, however, and he'll bring everything to a screeching halt. The occasional swaggy stepback was endearing, sure, but seeing it happen multiple times throughout a game became maddening. The percentages speak for themselves. Shooting just 26.5 percent on isolation threes and 36.5 percent overall in isolation is all the reason in the world to find a role for Young that doesn't involve generating his own offense.

So how good was his first season with the purple and gold? His first year with the Lakers -- his eighth year in the NBA -- proved to be his best yet as a pro. Let's play a game to compare him with another bench scorer. Which do you prefer, Line A or Line B?

Line A? Sixth Man of the Year Jamal Crawford. Line B? Nick Young. These two lines are nearly identical with some mild swings Young's way in field goal percentage, three-point percentage and rebounds to Crawford's higher assists and free-throw percentage. Crawford ran away with the award, scoring 421 total points. That was 57 first place votes, 41 second place and 13 third place for the Clippers' bench weapon. Young scored just three points in Sixth Man voting. THREE POINTS! He received a total of three third place votes, each worth a single tally on the chalk board.

Signed to help the Lakers defend their championship in 2010, Steve Blake's tenure on the Lakers was instead littered with injuries as the team has disappointed over the last few seasons.

Jordan Hill has been productive for the Lakers despite never quite finding a permanent role in the team's rotation. He'll be an unrestricted free agent this summer and it seems unlikely he'll be back in a Lakers uniform.

More than a trade chip: Steve Blake Over the Hill

Crawford earned $5.2 million through the '13-14 season, which was more than four times Young's $1.1 million salary. Talk about bang for your buck.

It also goes to show just how good of a campaign Young put together amid a chaotic Lakers season. He signed a two year contract worth a total of $2.3 million last summer and now has the opportunity to cash in on the swaggiest season of them all. This is contract-year's cousin, player option-year.

If he chooses to opt out it'd be a wise financial choice. Some team will try their luck at spreading the happiest player in the NBA's joy to their franchise. He's a bonafide sixth man scorer who can perform when put into position to succeed. The fork in the road is clear with Young, who has an incredible amount of momentum behind him after living the dream of a Los Angeles kid playing for the Lakers. A downtrodden year in Philadelphia transitioned into the Year of the Swag in Southern California.

Now, he's out at Chavez Ravine tossing out first pitches for the Dodgers. He's posing in GQ magazine spreads with his pop singing girlfriend Iggy Azalea while also notching covers on his own for local Los Angeles magazines. He's going shopping for sneakers with Complex magazine. Black sheep no more, Nick Young has the world at his fingertips after a season with the Lakers.

Will he be back? Like many of the other outgoing Lakers, it's hard to tell. It'd be a great situation for the Lakers if he accepted his player option and provided Sixth Man of the Year level production again. Maybe the lavish life provided in Los Angeles will be enough to sway Young to stay another year to smell the roses. Maybe the opportunity to sign a heftier, longer contract will be too much to pass up. Either way, there's not much to complain about. He filled a miserable season with joy. The wins and losses are all a muddled blur, but we'll always have beloved moments like this ...

... to hold on to. That year with Nick Young went way better than expected. Here's to hoping for an encore.