It's How You Shoot AND Where You Shoot From: Examining LA's Shot Chart

Where did the Lakers' shots come from this year and how did those locations compare to the NBA's top offenses?

Share All sharing options for: It's How You Shoot AND Where You Shoot From: Examining LA's Shot Chart

So last week I wrote up a piece addressing the Lakers offense in terms of corner three point shooting as compared to the top five most and least efficient offenses in the league. One of the major questions raised by the results of that comparative exercise was: If the Lakers are so close in terms of corner threes to the top offenses in the league, then why were they ranked 21st in offensive efficiency? I set out to answer this question by examining NBA.com shot location data to see where the Lakers shots came from in the 2013-14 season by percentage, and then compared that to the average percentages of the top five offenses in the league. Hopefully this exercise can shed some light on how the Lakers could rank so highly in one of the most important factors in having an efficient offense, yet still rank so poorly in overall offensive efficiency.

To begin, let's take a look at the shot chart for the Los Angeles Lakers this year, with the percentages not representing efficiency but the percentage of the teams overall shots coming from each location. 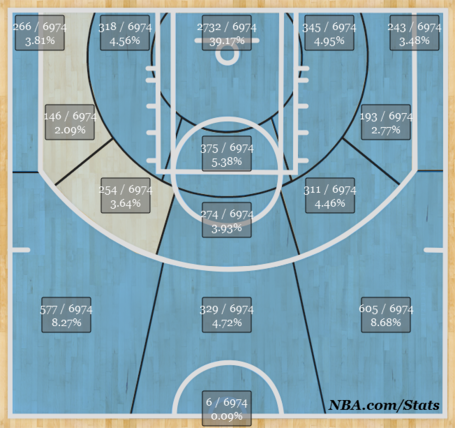 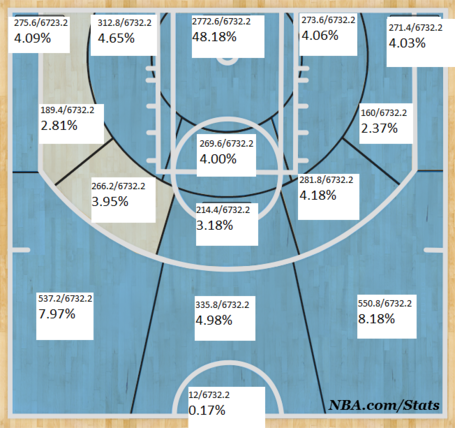 As a side note: NBA.com does not allow you to create averages like this so I was forced to make this beauty using paint and averaging the numbers in my calculator.

In order to best illustrate the differences between a top offense and the Lakers, I also made this chart: 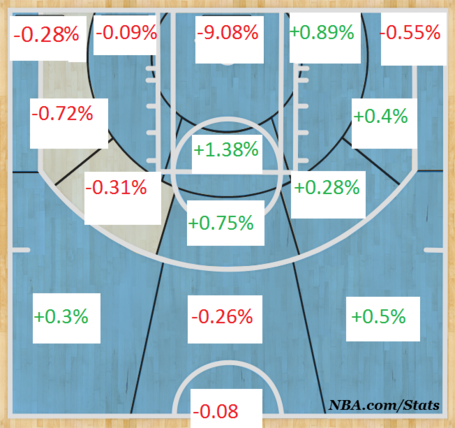 The most obvious thing when looking at this chart is the stunning drop of attempts around the rim by the Lakers as compared to one of the top units, a whopping 9% less of their shots at the rim. This is surely as large of a factor as any in the Lakers ranking so low in offensive efficiency. Shots at the rim are the easiest, and thus most efficient shot in the game, and so getting a low percentage from your offense from that area is surely detrimental to a team, with the diet of less efficient shots to take the short range one's place leading to fewer points overall.

To illustrate this, 9.08% of the Lakers' shots factors out to 633.24 shots over the course of the season. The Lakers shot 55.31% at the rim over the course of the season, which would mean that those extra shots would factor out to 700.49 points, a rate of 1.11 points per possession, a fantastic rate of success for any offense. Now, given the areas where the Lakers took more shots than the top five offenses, it would seem that at least some of these shots were redistributed to the mid range in the center and right side of the court. The Lakers average shooting percentage for these areas is where they averaged a higher percentage of shots was about 40.1% rounded up. Therefore, 633.24 shots redistributed over these areas could only be expected to produce 507.86 points, an abysmal 0.8 points per possession.

Now obviously not ALL of these shots were distributed to the mid-range area, but this all goes to show that where a team shoots from is a critical factor in its offensive success, and the Lakers were not shooting from the right areas.

Keeping with the theme of it being a good idea to take efficient shots, the Lakers also trailed these top offenses in corner 3s, albeit not by much (0.83% total, or 57.88 total attempts over the course of the season), but is significant when you factor in percentages on these shots. This is because the Lakers shot 40.69% on corner threes, as opposed to 37.36% combined on other types of threes. If we imagine that these 57.88 attempts that the Lakers took less than a top 5 offense were redistributed to other types of threes (which is not necessarily the case but just for an example), the Lakers would be expected to produce about 64.87 points based on their percentages. If these shots were redistributed to the corner, LA would be expected to score 70.65 points. Over the course of the year, this factor alone would obviously have not led to LA being a top offense, but it is just another example of how the distribution of shots matters.

Surprising no one who watched the majority of the purple and gold's season this year, the Lakers were above the averages of these top offenses in mid-range jumpers above the free throw line, no doubt partially a credit to the presence of Nick Young and his proficiency at creating such shots.

Another thing to keep in mind when looking at these shot distributions is that three of these offenses have in common one of the top mid-range shooters in the game at PF-- Aldridge, Bosh, and Nowitzki--while the Clippers have two good mid-range scoring guards in Chris Paul and Jamaal Crawford, while the Rockets eschew the mid-range game to the extent of being an outlier statistically. But the Lakers have Chris Kaman you say! Oh, no one was saying that? Never mind then.

For several reasons (the resignation of Mike D'Antoni, and the fact that almost every player that played significant minutes is a free agent), it is in doubt how much value one can even place in the statistics from the Lakers' past season for drawing conclusions for the future of the team. However, I hope I was able to illustrate that aside from having better players, one of the most prudent things the Lakers can do going forward in order to improve their offense is to take more efficient shots (at the rim, corner threes) and fewer less efficient shots (mid-range). Whoever is selected to next captain the Lakers ship, whatever offense they run will have to generate more shot attempts at the rim if they want to have any hope of success. If they can do these things, which go hand in hand with getting better players such as their incoming lottery pick and the return of Kobe Bryant, they will be back closer again to running an entertaining and effective offense, while hopefully picking up some wins along the way.