Jordan Hill has been productive for the Lakers despite never quite finding a permanent role in the team's rotation. He'll be an unrestricted free agent this summer and it seems unlikely he'll be back in a Lakers uniform.

Share All sharing options for: Lakers, Jordan Hill an unlikely fit this summer

Jordan Hill is a poster player for anyone who believes that numbers tell the story. He tied with Pau Gasol for the highest Player Efficiency Rating on the Lakers, ending the season with a career-high 19.3 PER. He ranked in the top-3 in offensive rebounding percentage through the season, snagging 24.3 percent of all available misses. I've been one of the biggest supporters of Hill since he joined the Lakers, singling him out last summer as the team's "film room all-star" and breaking down with film why he needed to be an integral part of Mike D'Antoni's frontcourt rotation.

Fresh off of a career year despite being in-and-out of the rotation, Hill will be an attractive unrestricted free agent for team's needing an immediate plug-in player. Likely too attractive and not well-rounded enough for the Lakers to retain.

For all of the pluses in Hill's game -- the aforementioned rebounding, the athleticism, his ability to finish a pick-and-roll -- there are undoubtedly minuses to weigh into the equation. When he isn't engaged in a game he becomes a ghost on the court. Scanning through his game logs you can find games where he played more than 15 minutes and logged less than four rebounds. There were 13 games where he didn't log a single offensive rebound. In six of those games he only grabbed a single defensive rebound.

Playing word association with Hill leads to many positive phrases, but also leads to a few negative ones as well. Inconsistent and limited are the two that come to mind immediately.

Hill's been in the league for five full seasons and his skill set is likely close to reaching a plateau. His mid-range jumper isn't anything to bank on, his post-game is on par with about every other mechanical big man in the NBA and he doesn't move the ball well, either.

He was in a three-way tie with Robert Sacre and Shawne Williams for the second-lowest assists per game on the team with .8. His ratio of .72 assists per turnover was the worst on the team, according to NBA.com. Ball did not find energy with Hill. 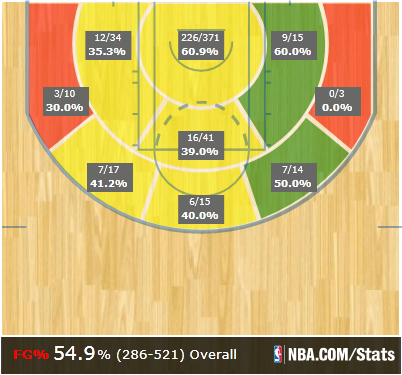 I suppose you could park Hill on the right baseline for his mid-range game, but his shot chart shows why he's much more suited to stick around the rim than not.

It's as simple as this as far as his away-from-the-basket game is concerned: when he made a mid-range jumper it was like finding a $20 bill in your jean pocket when doing laundry. He shot just 41% on attempts between 10-16' out and was far more effective rolling to the rim than floating on the perimeter after he set a screen. Sure, he can step out and it isn't detrimental to an offense when he hoists up a jumper, but that aspect of his game isn't refined enough to make him a legitimate mid-range frontcourt player. Besides, if he's launching shots from fifteen out he's not at the rim where he can flex his most useful talent, his offensive rebounding. It's a flat-out backwards tactic to feature Hill shooting jumpers. His low-percentage mid-range game is heavily outweighed by his elite glass-cleaning ability.

Hill's post-up game doesn't need a book written about it, so this will be a quick-and-easy execution. He averaged .87 points per possession in raw post-up attempts, shooting just 47.1 percent, per Synergy Sports Technology. Every now and then he'd connect on a hook shot, but much like his mid-range game, it isn't a talent a team should work into their offensive strategy.

All of this isn't to say that Hill isn't a quality NBA player. He's been highly productive for the Lakers since being snagged from the Houston Rockets in exchange for Derek Fisher. The Lakers frontcourt has been about as energetic and athletic as an All-AARP basketball game over the last few seasons and Hill has been like an adrenaline shot to the bigs. The problem, however, is that the Lakers likely won't be able to afford a player like Hill this summer. They have too many needs in too many places with too much on the line to ink him to a large or even mid-tier multi-year deal. The secret is out on Hill and any team in position to make a playoff run next year should be interested in adding one of the NBA's best rebounders to their roster.

Hill is a very specific kind of player who can fill out a very specific kind of role. Put him in the Heat's frontcourt rotation, have him come off the bench for Gregg Popovich, toss him in a small-ball lineup for the Golden State Warriors or perhaps the Los Angeles Clippers will finally find the serviceable backup big they've desperately needed.  It's not a reach to see any number of playoff teams targeting Hill this summer, especially with a weak class of big man free agents to pick through. There will be plenty of attractive destinations for Hill to land.

He's a great piece for a team needing a role player or two to finish a roster. The Lakers are on the other end of the spectrum with a blanked out roster, new incoming head coach and a myriad number of unanswered questions. Hill is a great first big off the bench, but is he worth mortgaging a small portion of the future for? It's important that the Lakers keep their books clean barring long-term pieces over the next two seasons, and even as a staunch Hill supporter it's difficult to put that kind of faith into his inclusion.

He'll fetch in the kind of contract he deserves -- probably something in the range of a three-year, $21 million contract -- and it'll make perfect sense for the right team. Unfortunately, the dollars don't make sense for the Lakers this summer.