Any type of "Player Hater's Ball' looks unlikely, but can LA even keep the game close against its co-tenant?

Share All sharing options for: Showdown for Staples Center: Lakers at Clippers Preview

The Lakers season wind-down against some of the West's best continues on Sunday, as they head on the "road" to face the Los Angeles Clippers. The same Clippers that only a few weeks ago helped the Lakers set a new franchise record by defeating the Show by 48. Uh-oh. Even those in the pro-tanking crowd cannot enjoy having to watch something like that (if they are even watching at all. Is anyone watching? Hello?)

It is hard to look find any evidence that the Lakers have a chance in this game. For one, the Clippers are currently in a dead heat (pun unintended) with Miami for the league's best offense, with a team OffRtg (points per 100 possessions) of 109.4, as well as the 2nd ranked points per game differential with a +6.9. By contrast, the Lakers are ranked 21st, scoring a 101.8 per 100 possessions, and a point differential of -6.3 (27th in the league). But at least they make up for it with defense right? (Says no one who has watched a Lakers game this year). Our beloved purple and gold continues its Washington Generals-like run on that end of the floor, giving up a 28th in the league ranked 107.7 points per 100 possessions; somehow even worse than the D-League level outfit that is the 76ers. The Clippers, meanwhile, are no slouches on that end of the floor, ranked 8th in the league in DefRtg at 101.9. Contributing to that defense is the NBA's leading rebounder (13.8, almost a full board ahead of second ranked Andre Drummond) DeAndre Jordan. DJ also ranks 3rd in the league in blocks (2.4), while on the offensive end shooting a league leading 67% from the floor.

Another Clipper that is putting his mark all over the league leaders boards is Cliff Paul's more famous brother Chris, the man whose continuing success serves as a never ending reminder to Lakers Nation of what could have been without the infamous "basketball reasons" incident, CP3 is currently the league's leader in assists(10.8) and steals(2.53), while also scoring a 22nd ranked 18.9 ppg. Paul's penchant for thievery is of particular potential danger to the Lakers, who rank 13th in the league in turnover percentage, coughing up the rock on 15.1% of the time they are on offense. Given the Lakers transition defense woes, this will likely lead to the Clippers coming close to, or exceeding, their 2nd ranked average of 18.5 fast-break points per game.

All this blood spilled and we still have not addressed Blake Griffin. The uber-athletic specimen has been having a breakout, MVP conversation type year. Currently 6th in the league in scoring, while shooting nearly 53% from the field, Griffin has also improved his defensive effectiveness under new Clippers coach Doc Rivers, as well as being given more freedom to have the offense run through him both on the break and in the halfcourt. The man is a beast, evidenced by him being able to get shots at his favorite spot on the floor (the paint), the majority of the time despite teams trying everything short of attempted murder to stop him from getting there. Seriously, look at the guy's shot chart: 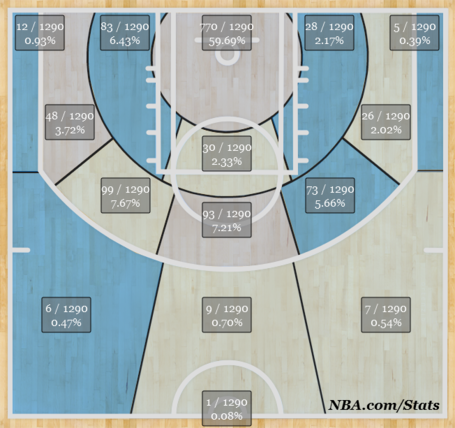 He is taking almost 60% of his shots in the paint! With the Lakers seemingly allowing a parade of layups every single game, this does not bode well for their chances of winning.

For those that are looking for a silver lining, one possible avenue for a different result than last time is that Pau Gasol, who is most likely done for the season, will be out with continuing symptoms of vertigo. Gasol undoubtedly hurts the Lakers on defense whenever he is on the floor, and on offense as well given the team's sometimes over-deference to him in terms of letting him post up despite his drop off in efficiency. The lack of his lumbering will also likely make the Lakers a little bit better on transition defense, an area in which the Clippers annihilated the purple and gold in the last game, running out for dunk after dunk. Other than that, those that are rooting for a win will just have to hope for one of the Lakers getting hot on national TV on a Sunday afternoon game, a la Jodie Meeks dropping a career high 42 on the Oklahoma City Thunder in what was probably the best game of his career.

Just to thoroughly beat a dead horse, the result of this game will ultimately be decided by the level of effort that the Clippers choose to apply. This depleted Lakers roster is going to try very hard every game out, but just does not possess the requisite talent to defeat a Clippers juggernaut that is fully engaged. We are almost done, friends.