Three ball corner pocket! Taking a look at the corner three, the Lakers, and the best and worst offenses in the league.

Share All sharing options for: Corner threes and the Los Angeles Lakers

Last week, NBA shot chart maven Kirk Goldsberry wrote a very interesting piece at Grantland on players who generate the most corner threes. This made me ask a few questions:

I turned to NBA.com's handy shot chart tools to answer these questions and decided to average the amounts of corner three attempts and makes of both the top and bottom five offenses in the league in terms of offensive efficiency this year via ESPN's Hollinger Team Stats.  For the 2013-14 season, the top five offenses in the league in order were:
Here were their shotcharts by location (including corner threes):
Clippers: 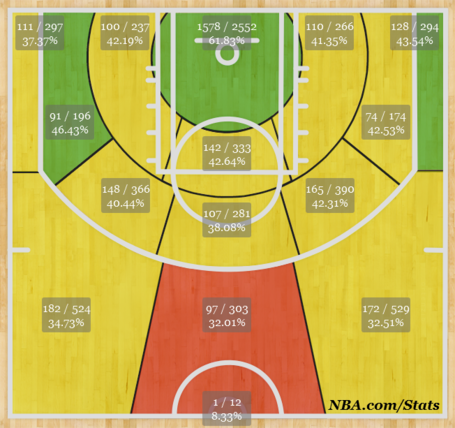 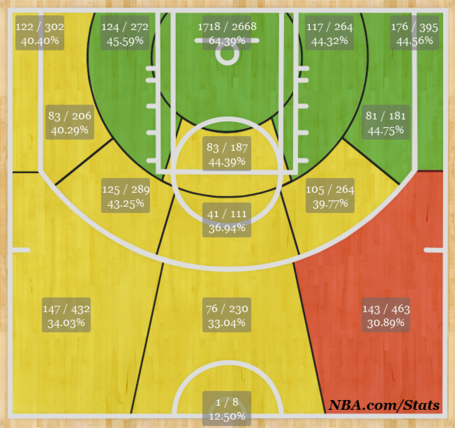 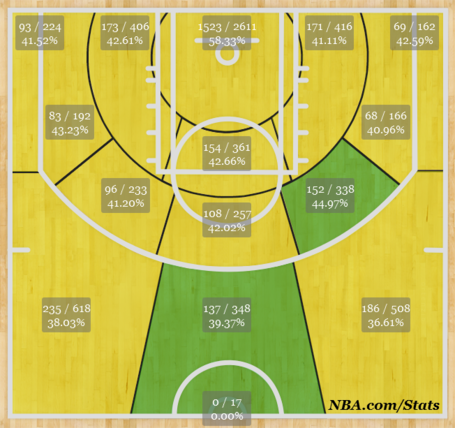 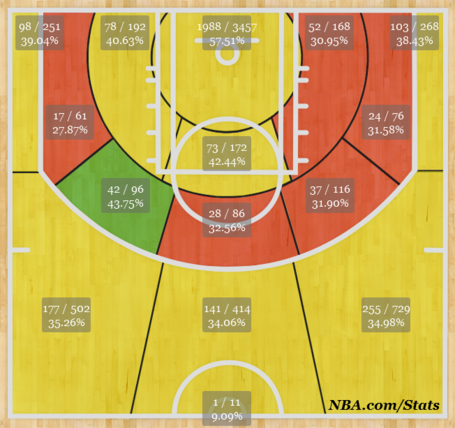 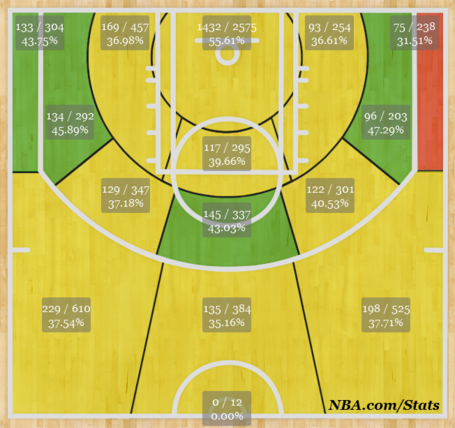 So in summation, for the 2013-14 NBA season, the top five offenses in the league averaged:
Left Corner Threes: 111.4/275.6 (40.42%)
Right Corner Threes: 110.2/271.4 (40.6%)
(just for reference, the league average three-point percentage this year was 36%, so clearly that makes the corner three pointer a dangerous weapon for these teams.)
One interesting tidbit about those top five offenses was that four of them were in the Western Conference, and sticking with the theme of the East's terribleness this year; all five of the worst offenses were located in the Eastern conference. Ranked from worst to "best" they go
Before I get to their shot charts: Holy crap Chicago! For all the (deserving) plaudits Joakim Noah has been getting for keeping their offense existing, imagine how bad they would be without him! It just goes to show how important the defensive end of the floor is in addition to the offensive factors being explored here when looking at team success. Additionally, when Sam Hinkie decides to tank, he means business. The Sixers finished almost three full points lower than Orlando. That is bigger than the difference between Orlando (29th) and our own Los Angeles Lakers (21st). The purple and gold will be discussed next, but first, here are the shot charts of the bottom five teams:
Sixers: 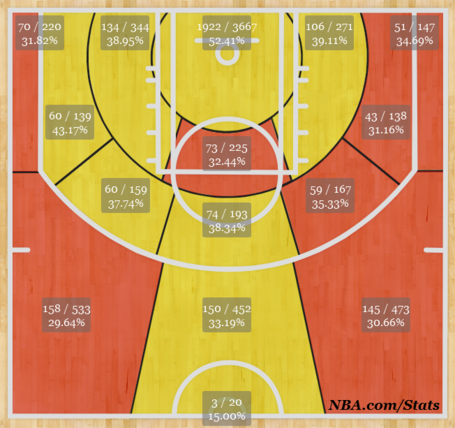 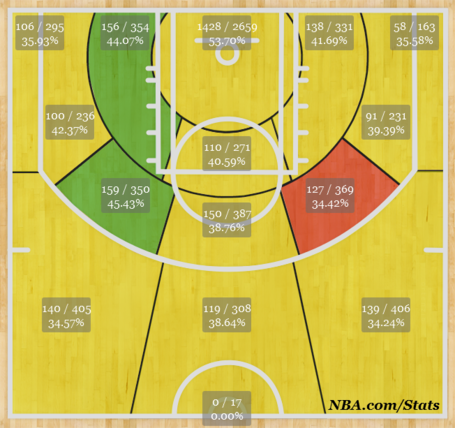 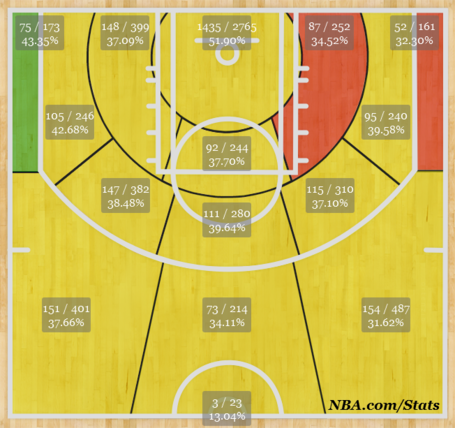 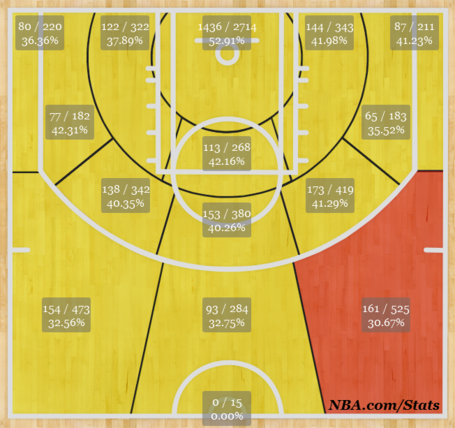 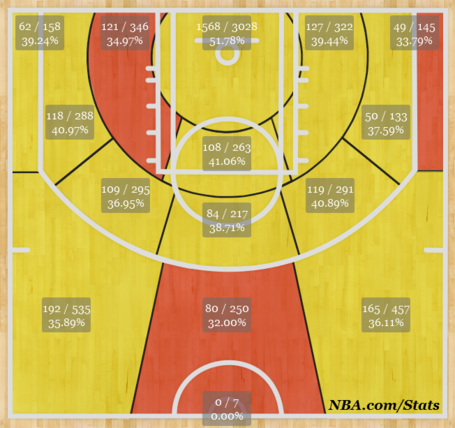 Wow there is a lot of red and yellow in there. But to summarize, the bottom five offenses in the NBA this season averaged:
Left Corner Threes: 78.6/213.2 (36.86%)
Right Corner Threes: 59.4/165.4 (35.91%)
For those of you that don't want to do the math, that means that the difference on average this year between a top five and bottom five offense has been:
Left Corner Threes: 32.8 less makes in 62.4 less attempts with a 3.56% drop in field goal percentage
Right Corner Threes: 50.8 less makes in 106 less attempts with a 4.69% drop in field goal percentage
Of course caveats abound, the main one being that top five offenses shoot better EVERYWHERE from the floor on average so obviously one cannot point to the corner triple being the SOLE reason for additional success, but surely it is a factor. I also decided to look at what the average top five offenses' PACE factor (the number of possessions a team uses on average per game) was versus the average PACE factor for a bottom five offense in order to see if it was only by virtue of playing at a faster pace that these top five offenses look so much better. The average top 5 offense averaged 96.74 possessions per game, while a bottom five outfit could be expected to produce 96.08  possessions per contest, for a difference of 0.66; or 54.12 less possessions per season. This shows that the increased average pace of a top five offense this season cannot solely account for the fairly significant disparity in corner three makes, attempts, and percentage.
With that information in hand, let's take a look at the shot chart for the Lakers this year in order to see where they fall in comparison to these two groups in corner three pointers: 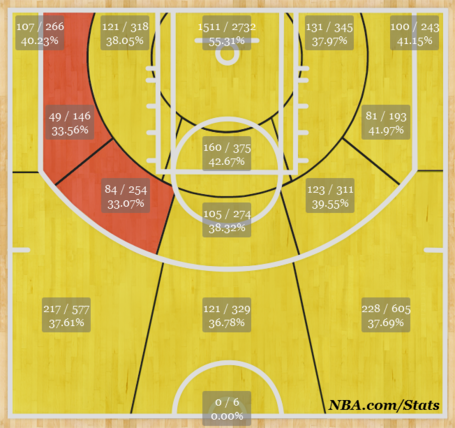 Well this would appear to give us good news and bad news. The good news is is that it seems that the Lakers are schematically headed in the right direction with their shot selection; they are much closer to the average top five offense in terms of their corner three averages then they are to a bottom five offense. The bad news? For one, LA still ranked 21st overall in offensive efficiency even with all of their corner three attempts and efficiency. Further compounding this news is the list of their top corner three point shooters:

The chart is small, but what it displays is that Los Angeles's top two corner three point shooters in both volume and efficiency were (most likely outgoing) free agent's to be Jodie Meeks and Nick Young. How will the Lakers replace this production? Well, if they are going all in and building a much more competitive team in 2014-15 around Kobe Bryant, an as of yet unknown lottery pick, and other cheap pieces then an answer could be provided right in the Goldsberry article. It just so happens that a couple of the most productive corner three pointer producers in the league. Kyle Lowry and Trevor Ariza, happen to be upcoming free agents who may be in the Lakers price range.

The 2013-2014 Los Angeles Lakers season has been finally laid to rest after a frustrating six months. What do the next six months have in store for us?

The primer
This is the part where I mention that I am by no means an expert in NBA salary cap minutiae. With that said; Kyle Lowry made $6.2 million this year. He has undoubtedly earned himself a pay raise, but may still fit into the Lakers expected salary cap room, especially given the projected rise in the cap. For those that did not read Goldsberry's piece, Lowry was the 4th most prolific corner three point assist generator in the association in 2013-14 with 61 assists on corner three pointers. For context, Lowry had 586 assists this year, meaning that more than ten percent of his assists led to a corner three pointer this season.
Ariza is a player any Laker fan is likely very familiar with: A Southern California high school star and a huge contributor over the course of the 2009 playoff run. This season Trevor played a large role in the Wizards success, hitting 40.7% of his threes, and additionally leading the league in most made corner threes with 78. Ariza made $7.7 million this past season, but probably will not match that on the upcoming free agent market. Who knows? He may even be receptive to the recruiting of former teammate/mentor Kobe Bryant.
Additionally, both Ariza and Lowry are solid defenders, instant upgrades over anyone Los Angeles was able to put on the floor this past season, and they also directly address multiple issues. If the Lakers are going to attempt to be more competitive this season, there are certainly much worse ways that Mitch Kupchak and Jim Buss could spend their cap space.
Circling back to my original questions:

There does seem to be some correlation, yes, as we saw that the average top five offense shoots with much greater frequency and success from both corner three spots.

This year's Lakers squad seemed to be much closer, in terms of corner threes, to a top five offense than a bottom five one. This is good news because it would appear that LA is at least in some ways taking the right kind of shots, but it is also troubling because despite its success from the corners, the Lakers were still ranked in the bottom third of the league in offensive efficiency.
Ultimately, and especially if Mike D'Antoni is let go, next year's Lakers offense may bear little resemblance to this year's both in terms of personnel and scheme and thus looking back on it like this may be fruitless anyway. What the Goldsberry article, and ultimately this research I hope, did show is that the corner three is indeed a potent weapon in the NBA today, and the Lakers front office should keep this in mind when assembling a roster for next year.