How Jeremy Lin can be effective with the Lakers

Share All sharing options for: How Jeremy Lin can be effective with the Lakers

The Los Angeles Lakers are five games into their season and are still win-less. Partially to blame is their incredibly tough schedule to begin the year, but many of the team's players have unquestionably performed below expectations. One of those under-performing players has been heralded offseason acquisition Jeremy Lin, who, after a very good preseason showing, has struggled in the first five games of the regular season. A good showing in Tuesday's game against the Suns helped his averages (because we are talking about a small sample size here) but he is still only averaging 10.5 points on a career low 37.8% field goal percentage (33.3% on three pointers). The five assists that Lin is averaging would look a lot better if he was not also averaging 3.4 turnovers.

With four days off in between games, now seemed like as good of a time as any to take a look at the point guard's struggles and successes, and potentially find ways to utilize his talents more effectively.

The Lakers' Halloween match-up against the Clippers was one of Lin's stronger games of the young season. So what went right?

Lin takes a dribble handoff from Boozer here, has a little bit of open space. 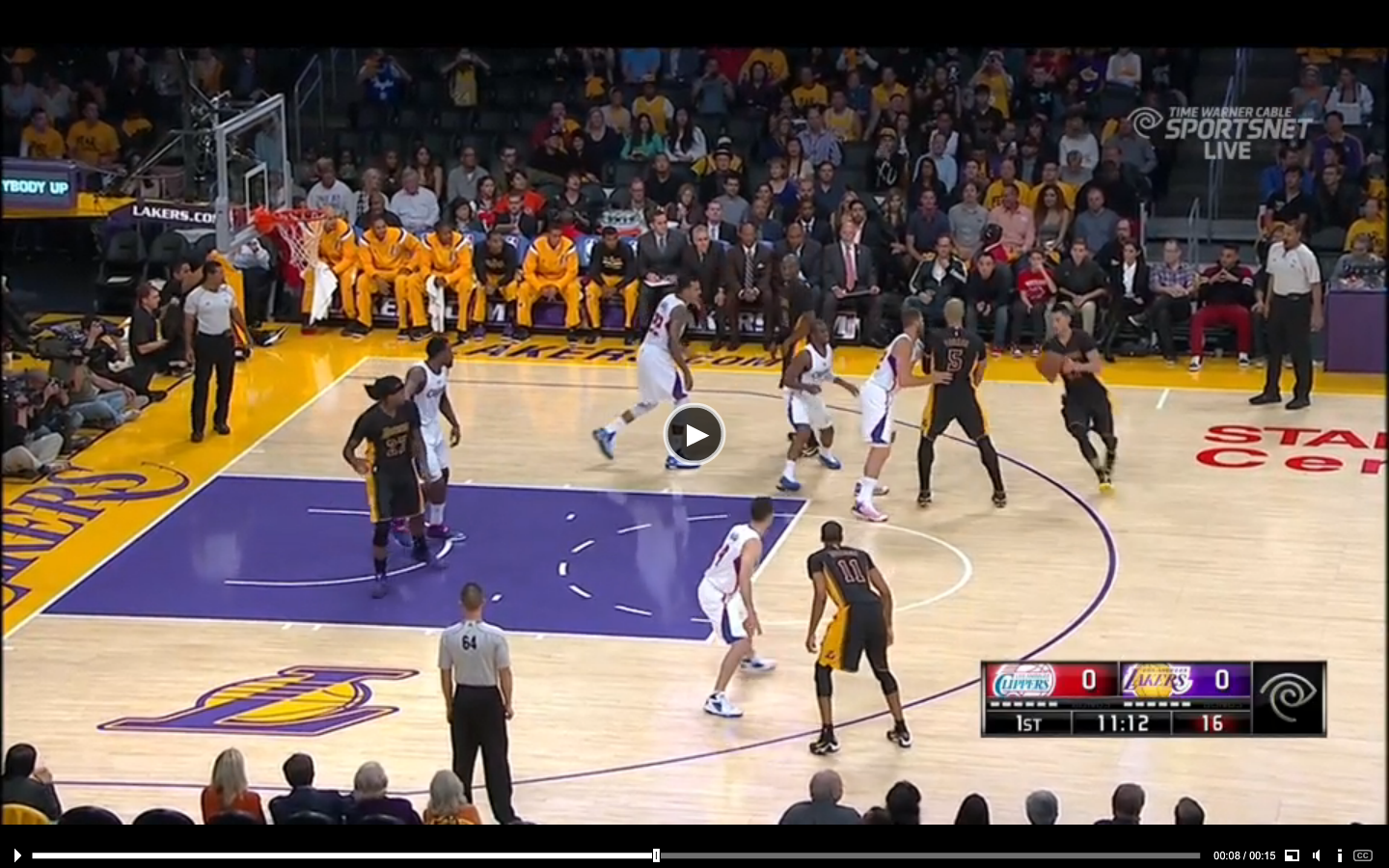 Chris Paul closes out, but Lin still had enough time to hit this quick three. (It was Halloween, so maybe he was just trying to scare Byron Scott by taking the long ball?)

Here is another action that I liked from that Clipper game, a Lin-Bryant 1-2 pick and roll. This was Lin's second shot of the game.

The action is initiated with a Bryant screen: 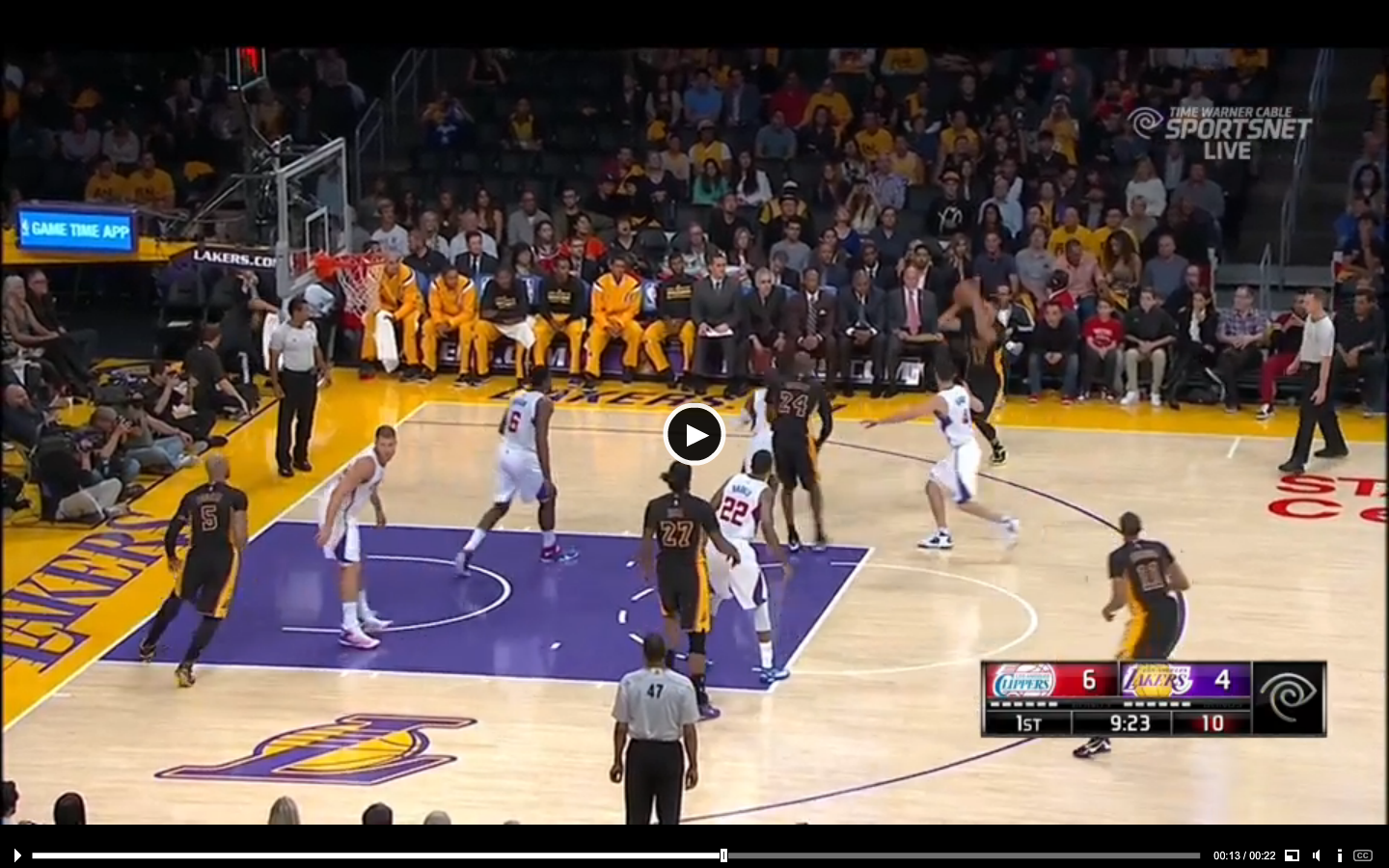 Through either miscommunication or genuine fear of Kobe, both players stick with him. This gives Lin a wide open three pointer, which he missed. Still, it's an effective play because a) it got both of the main offensive threats among the starters involved and b) generated a three pointer, which is something the Lakers' offense could use more of, especially against teams with smaller point guards who can't easily switch onto Kobe.

Another play that the Lakers need to use more: a Lin-Ed Davis pick and roll. 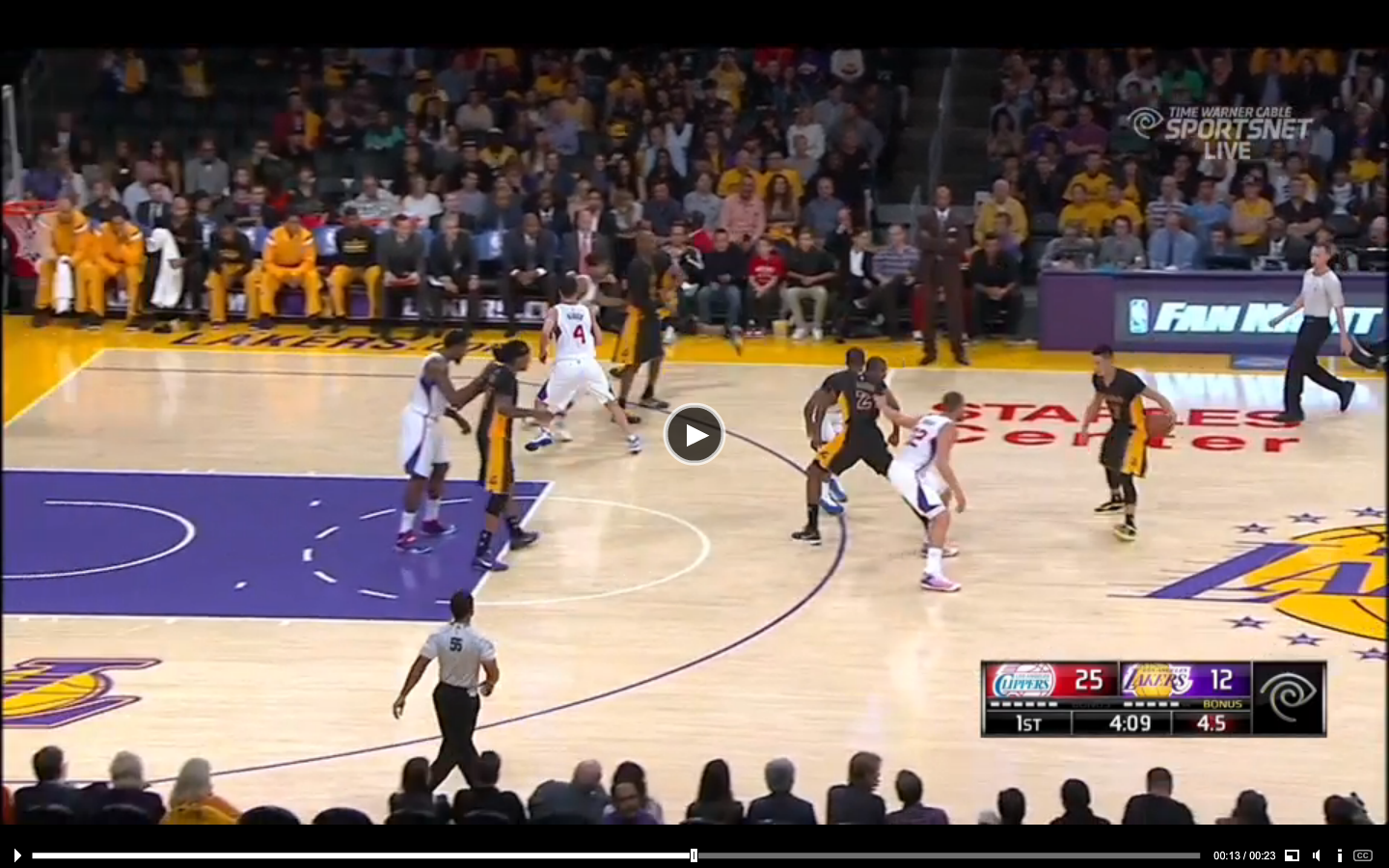 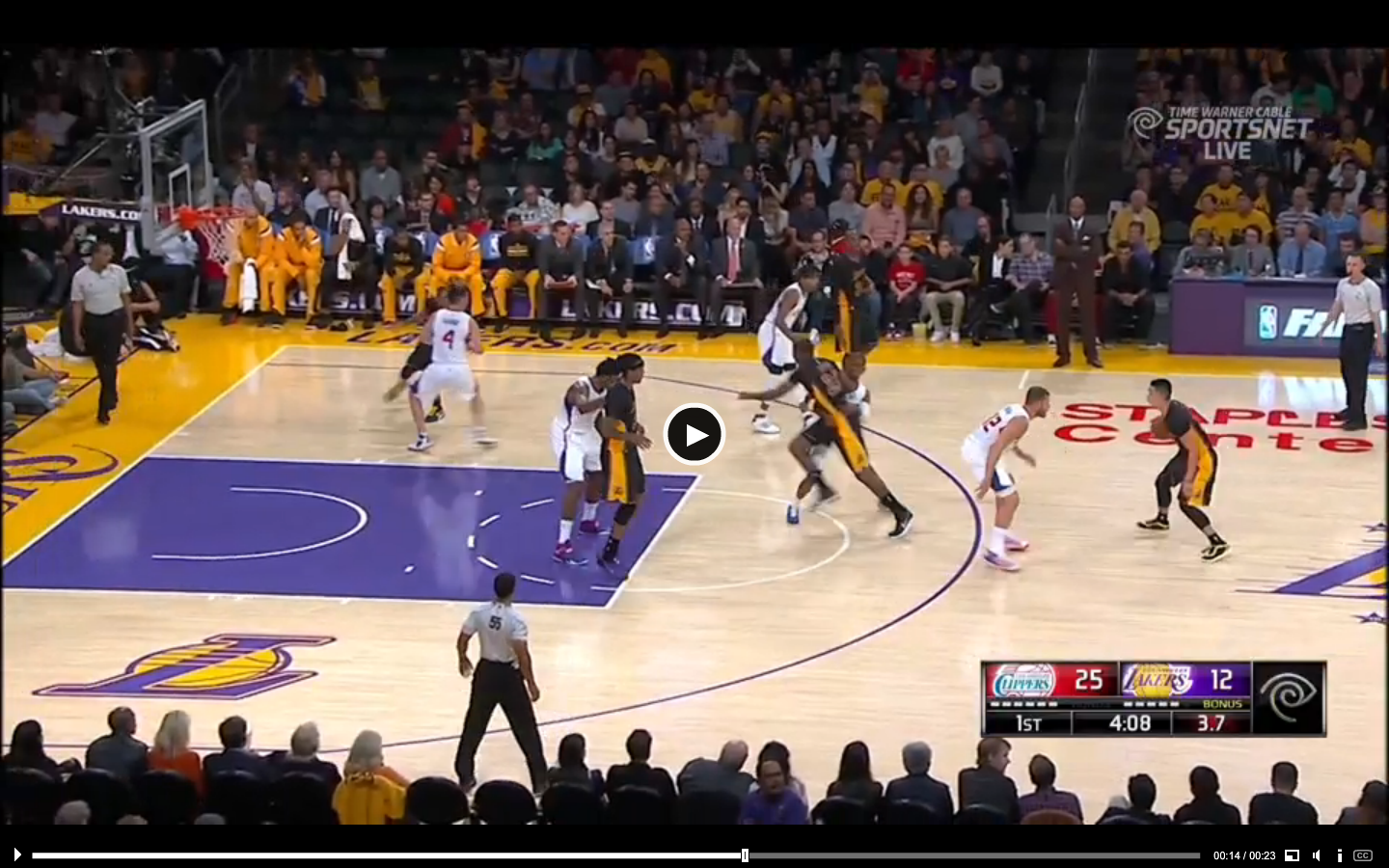 Davis rolls to the rim, sucking in Paul and DeAndre Jordan initially. 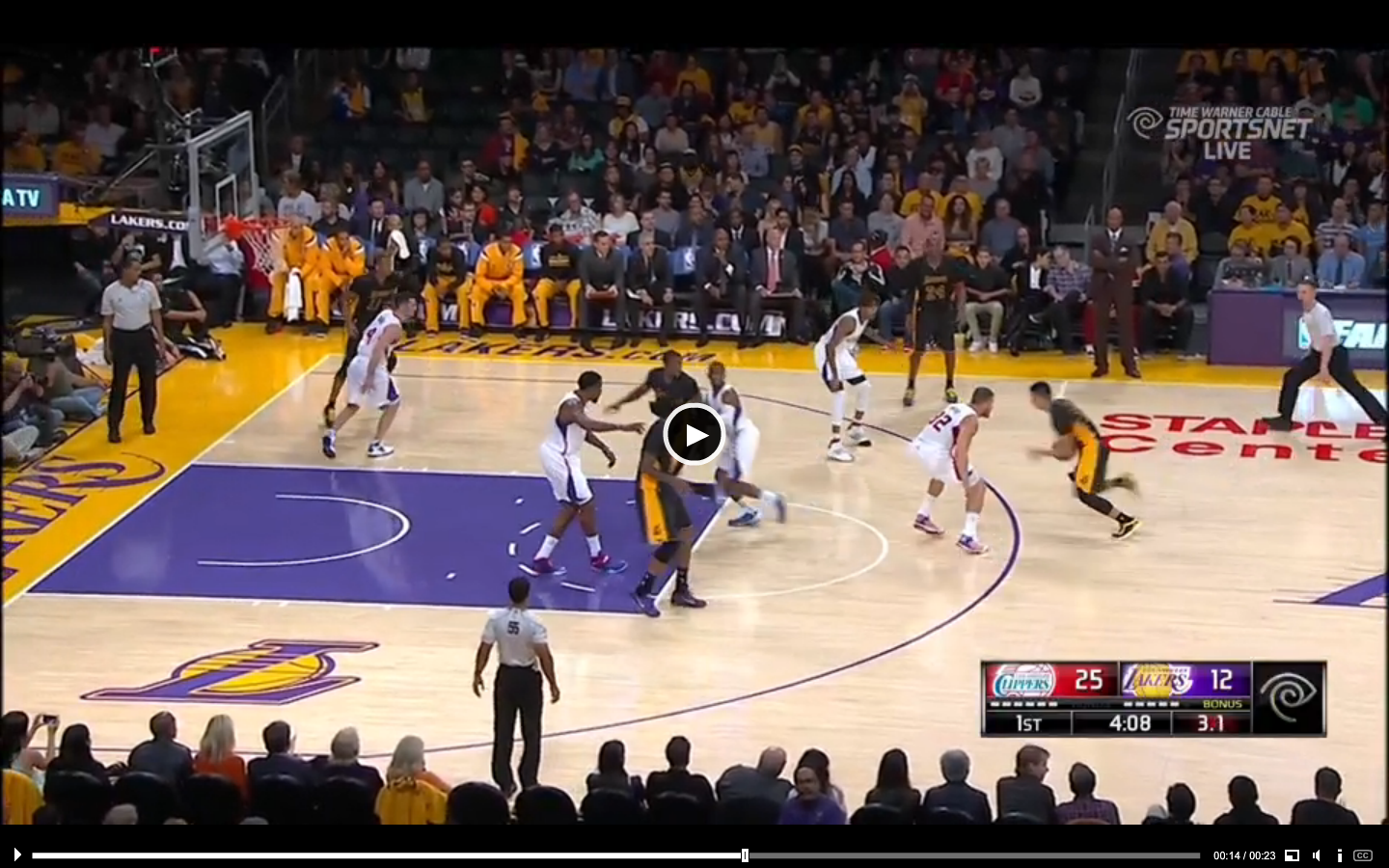 Lin sizes up Blake and quickly attacks with his speed advantage. 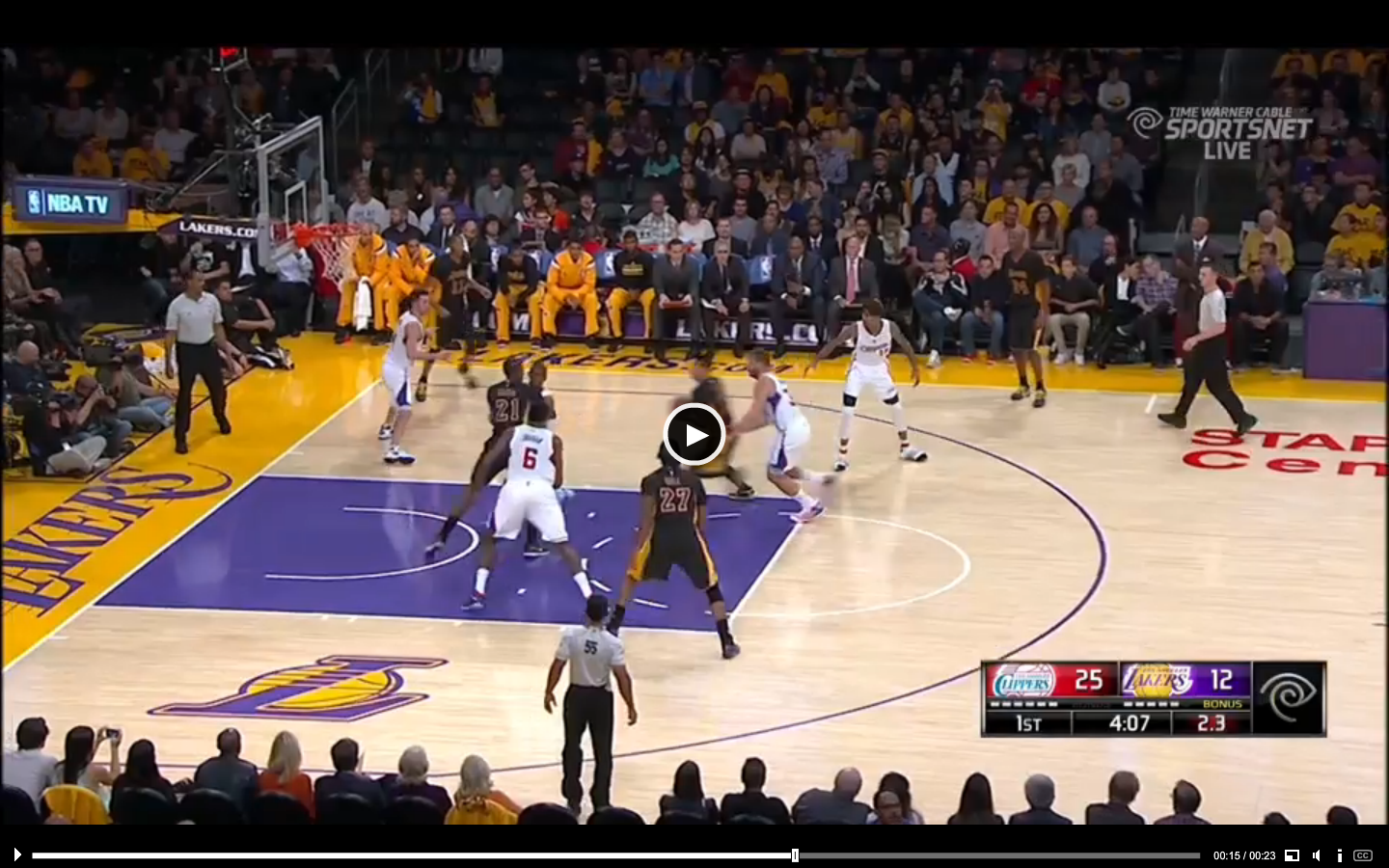 .8 seconds have passed, and Lin is now past Griffin and into the lane. Short shorts champion Chris Douglas-Roberts stays glued to Kobe and Lin has some space to work with. 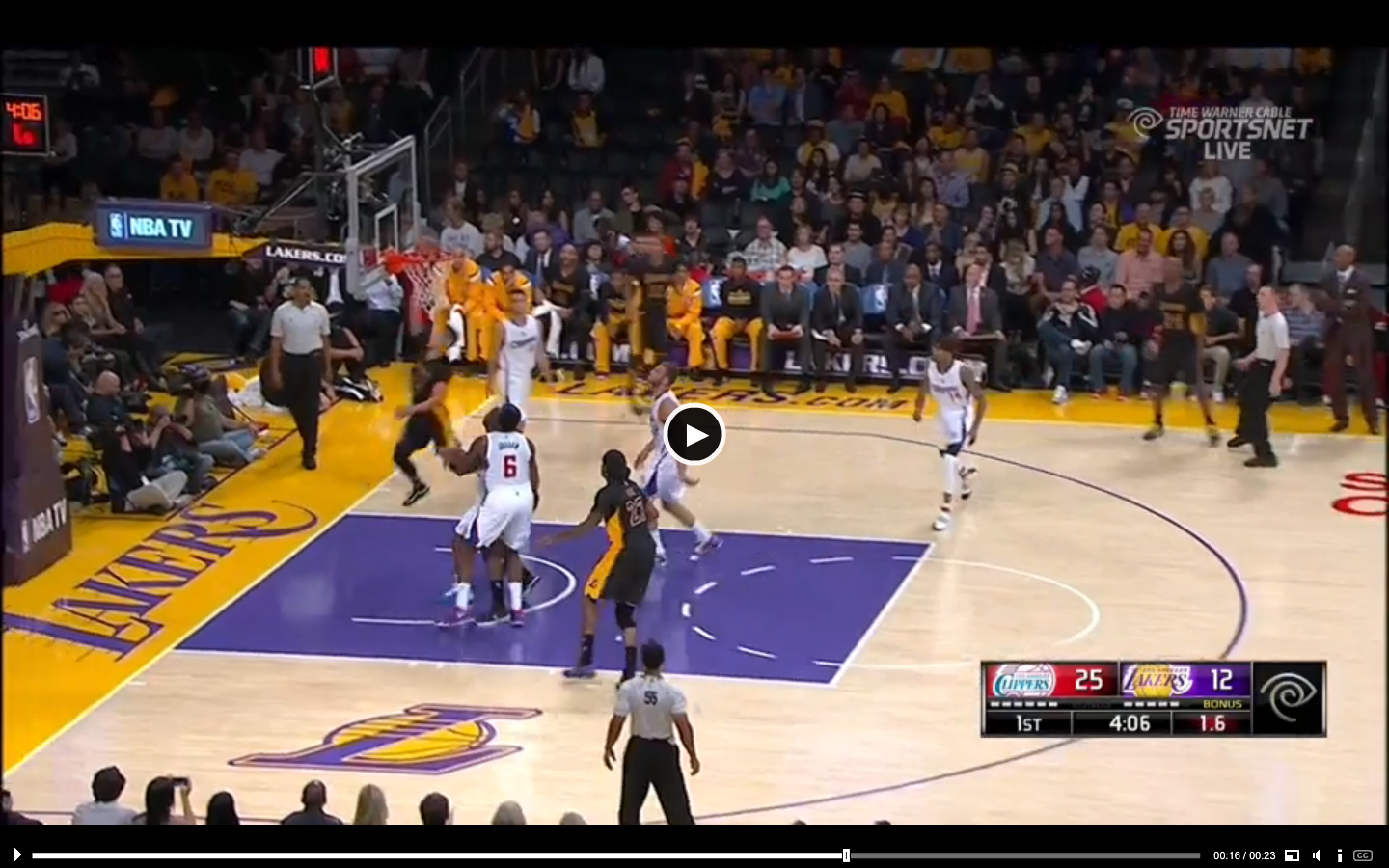 Davis boxes out Jordan, giving Lin more space. Somehow, proving that NBA players are indeed human and make simple mistakes like the rest of us, Lin missed this shot.

Here is third example of an effective way to use Lin, as a secondary attacker after the defense is compromised by an initial action or threat: 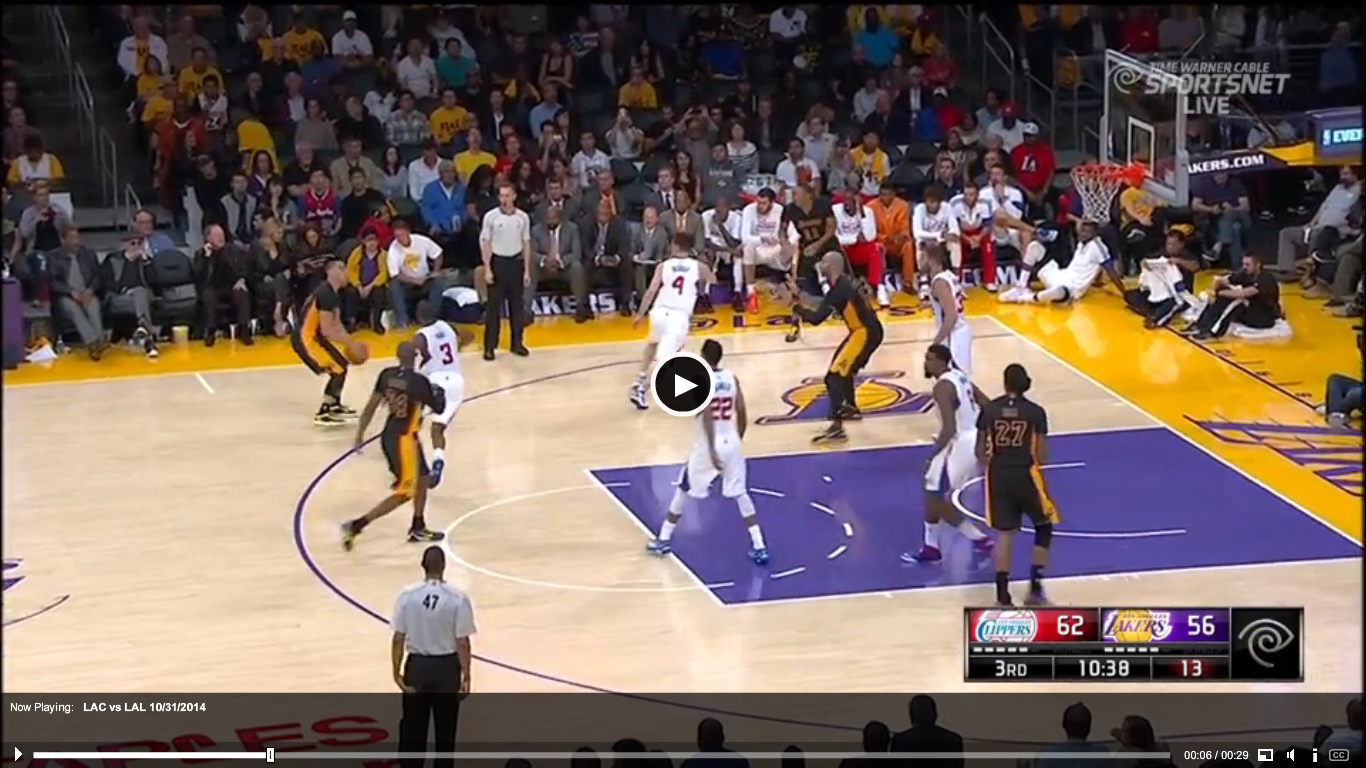 Chris Paul is scrambling to recover to Lin after helping on a Kobe-Jordan Hill pick and roll as Lin rises for another 3 .... 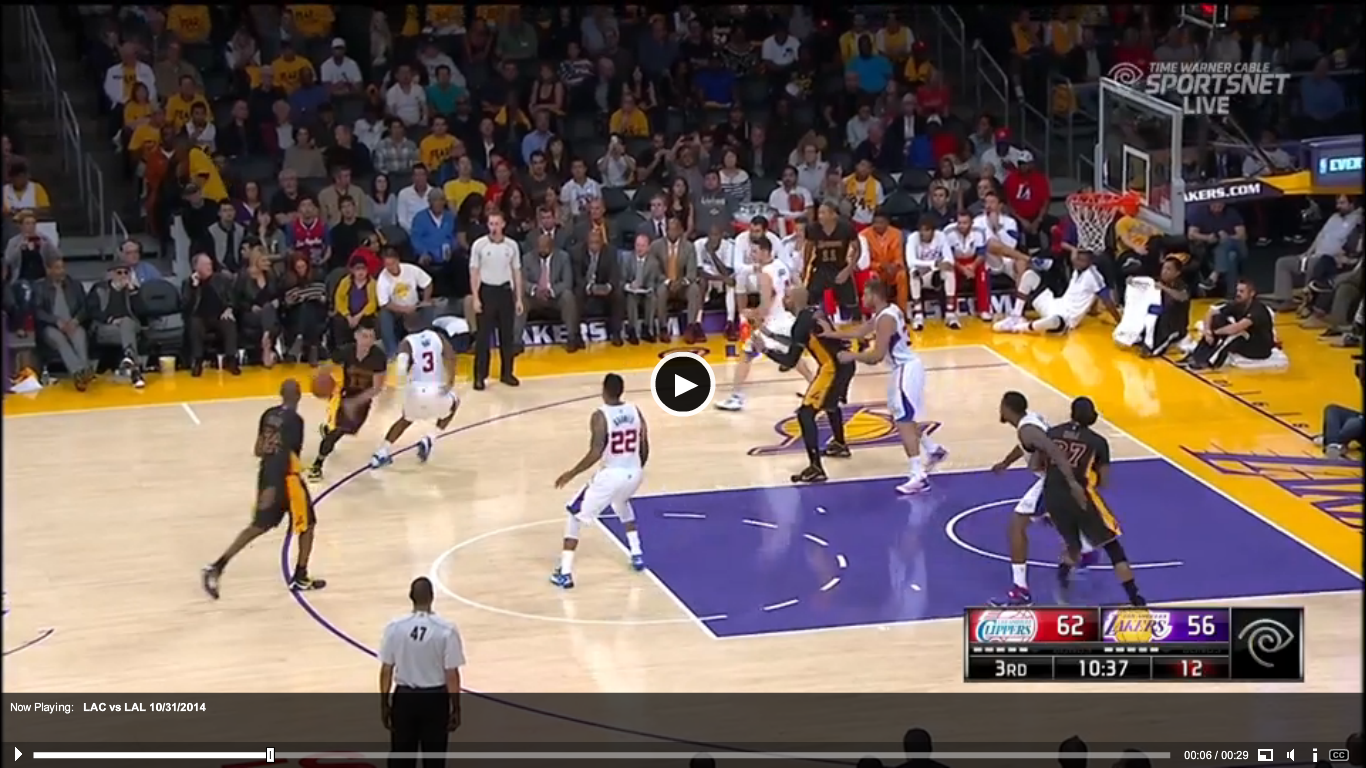 Not so fast! Lin instead pump fakes and puts the ball on the floor, leaving Paul off balance in his wake. 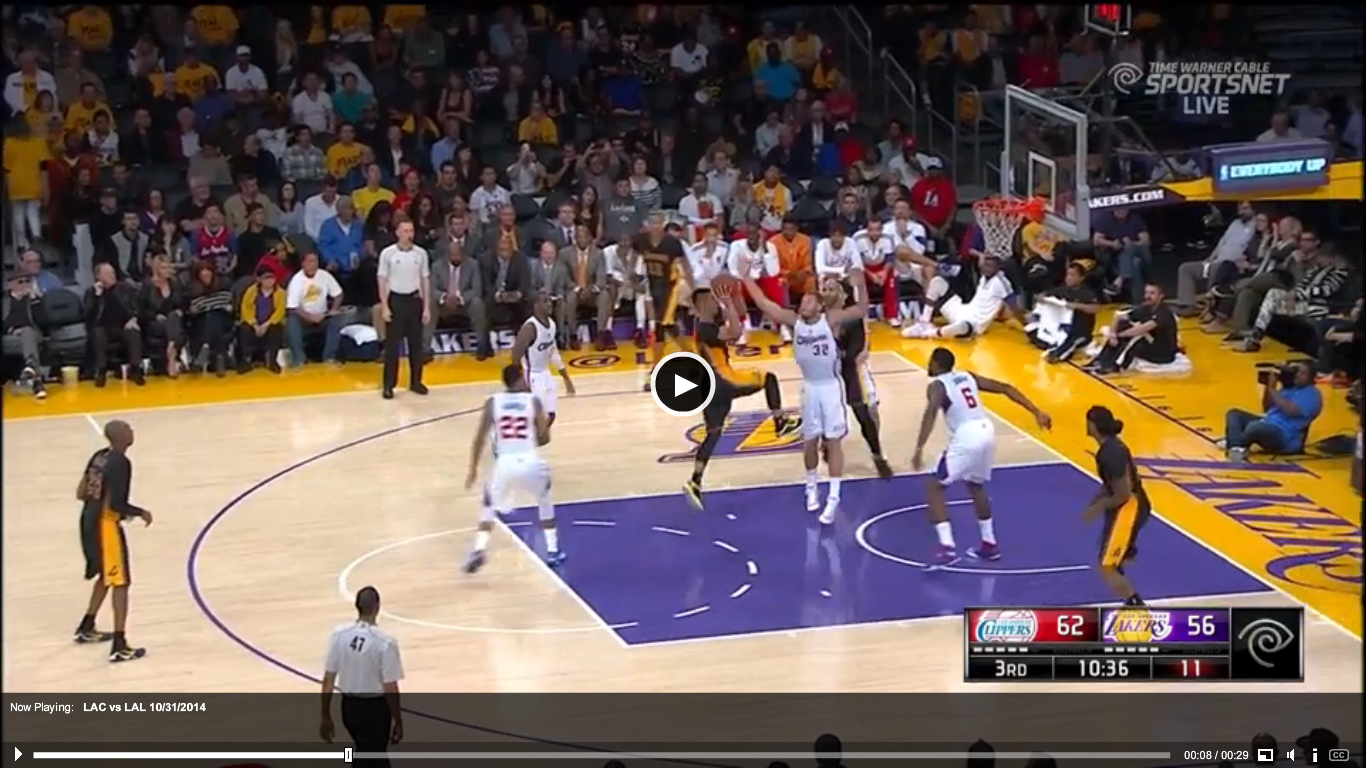 Lin then slices through the scattered and compromised defense, and gets into the paint to convert a tough shot over Griffin.

All of these examples utilized Lin coming off of a screen or as the secondary option, and that's no coincidence. Lin needs a little bit of help from his teammates in order to be effective, and these sets were a good way to get multiple players involved and force defenses into tough decisions that Lin can then take advantage of. The numbers back that up, as according to NBA.com's fancy new Sports VU player tracking data, Lin's shooting percentages on two point field goals rise the more open he is, from 37.5% with a defender within 0-2 feet, 41.7% with a defender within 2-4 feet, and 66.7% with a defender 4-6 feet away. (For what it's worth, these averages did not line up so neatly last season, as they were 54.7%, 40.5%, and 55.7% respectively on those types of two pointers, so this could potentially be a five game aberration.)

This still underlines that I can not imagine there are very many players who shoot better while covered than uncovered, and it emphasizes the need to put Lin in positions where he can succeed, something the Lakers could potentially work more on during the gap in their schedule between Tuesday's game in Phoenix and Sunday's game against the Hornets. Some of these adjustments may already be taking place, as Lin had a good night against those aforementioned Suns on Tuesday, going 4 -of-8 from the field while hitting 9 out of his 10 free throws en route to 18 points. Here is one example (not from a pick and roll this time) of the Lakers utilizing Lin's speed to free him up for a layup. 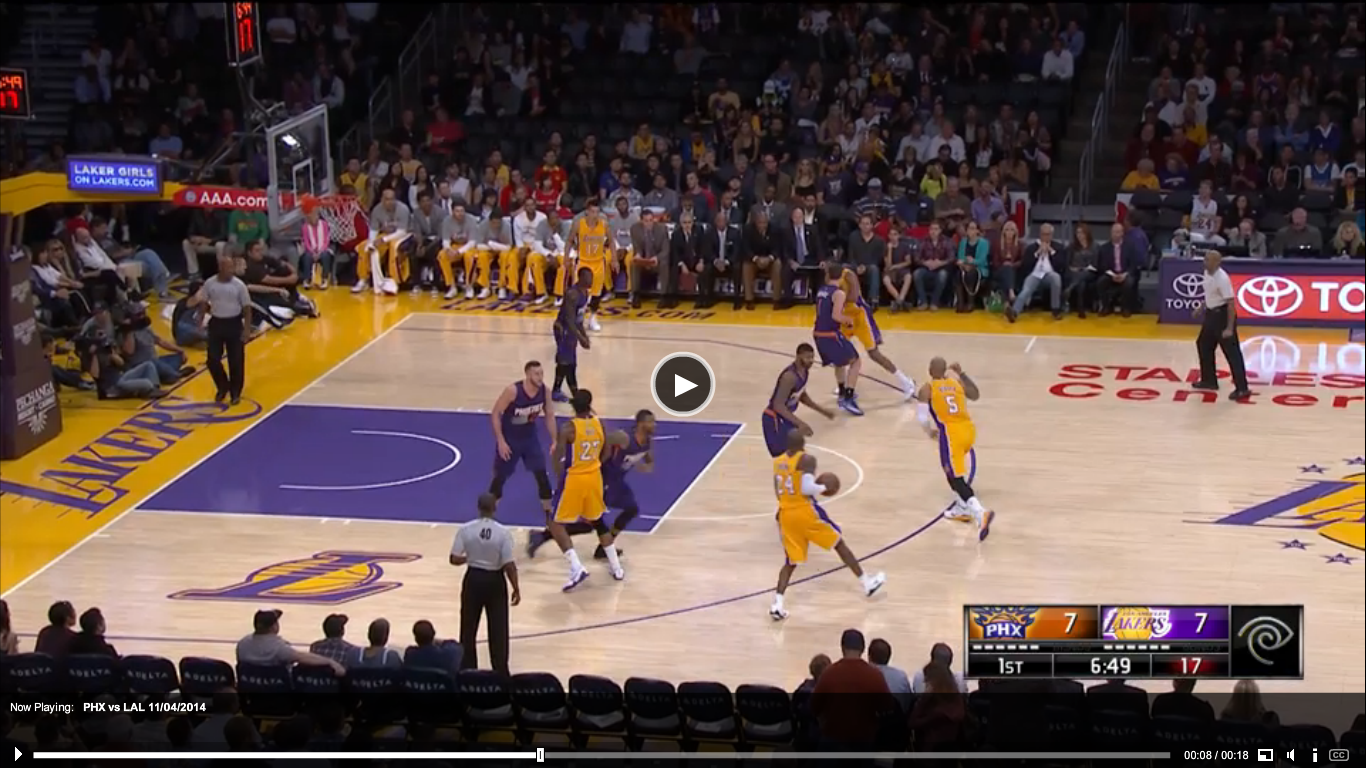 After bring the ball up the court, Lin gave up the ball and moved into the right corner, where the action begins. 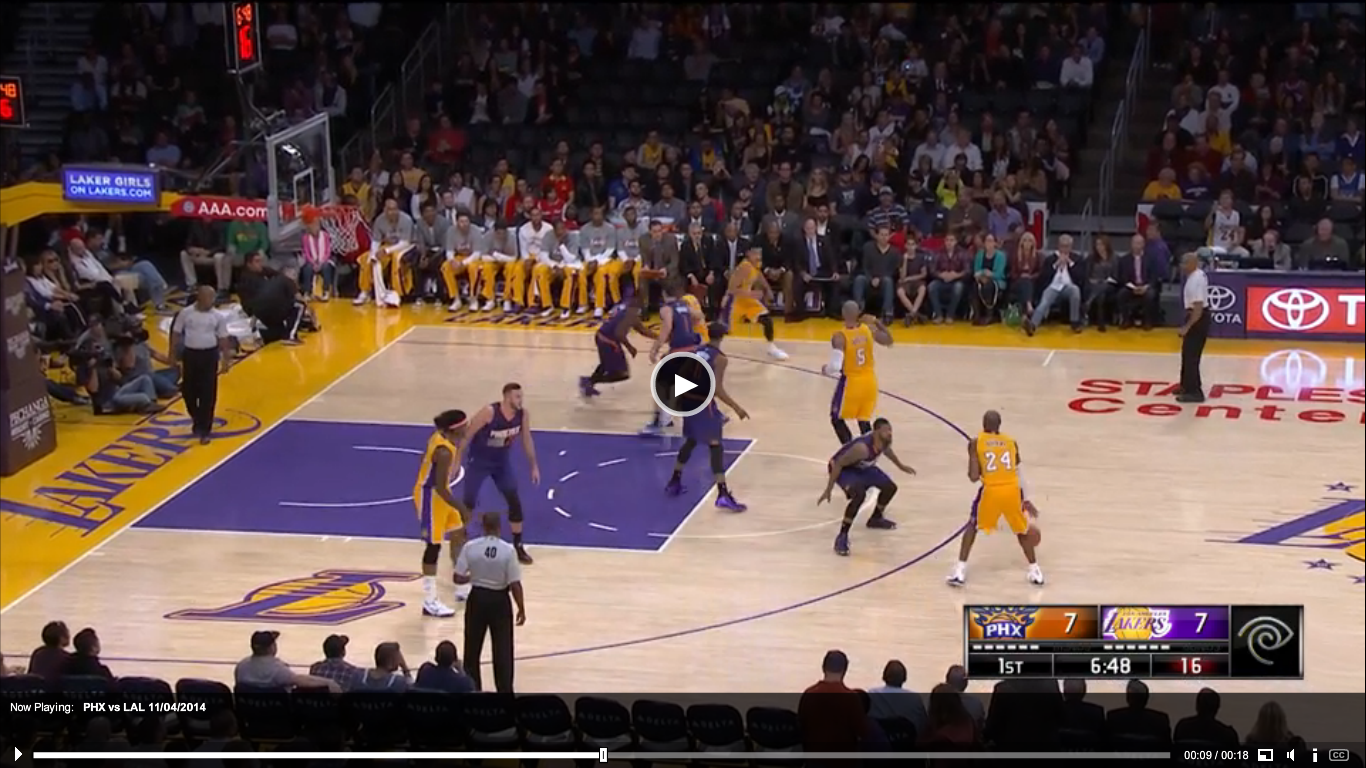 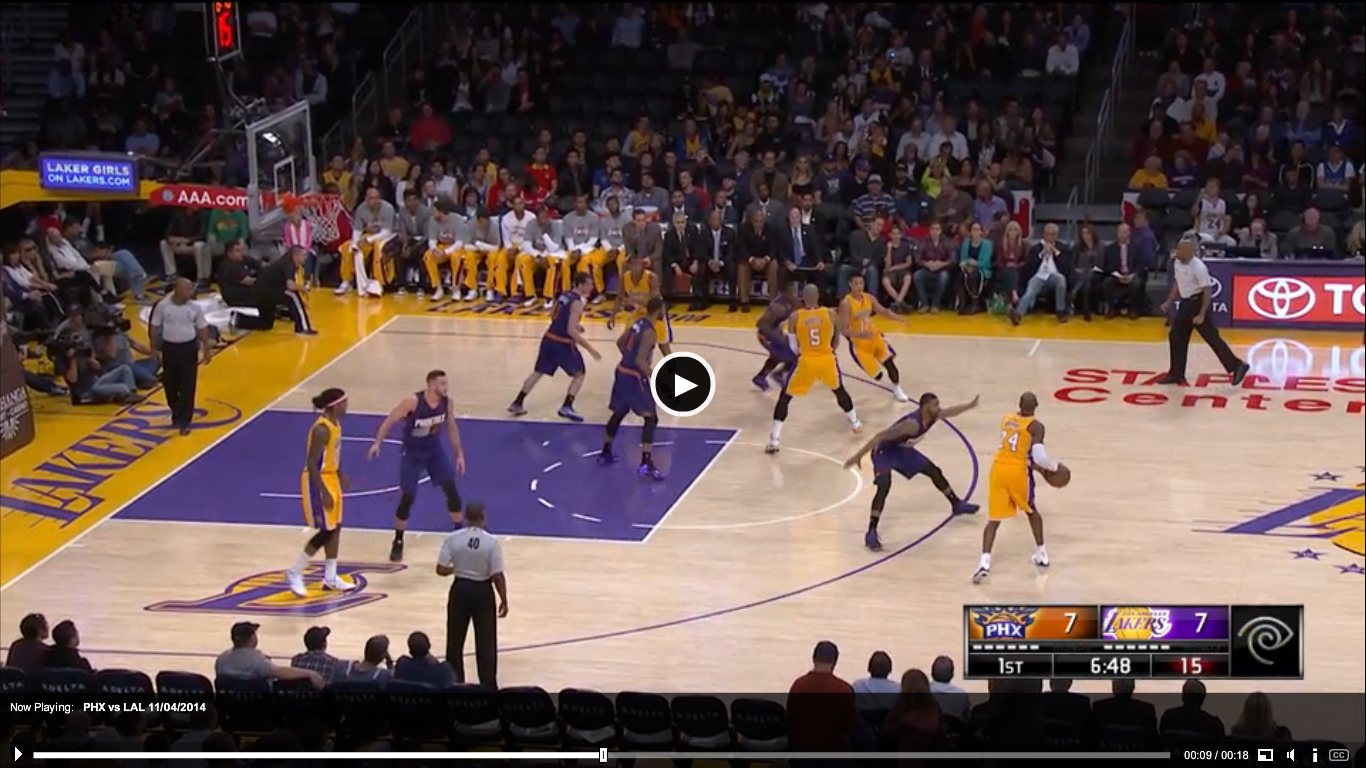 Lin then runs Eric Bledsoe through two screens in order to give himself some freedom to collect a pass from Bryant at the top of the key. 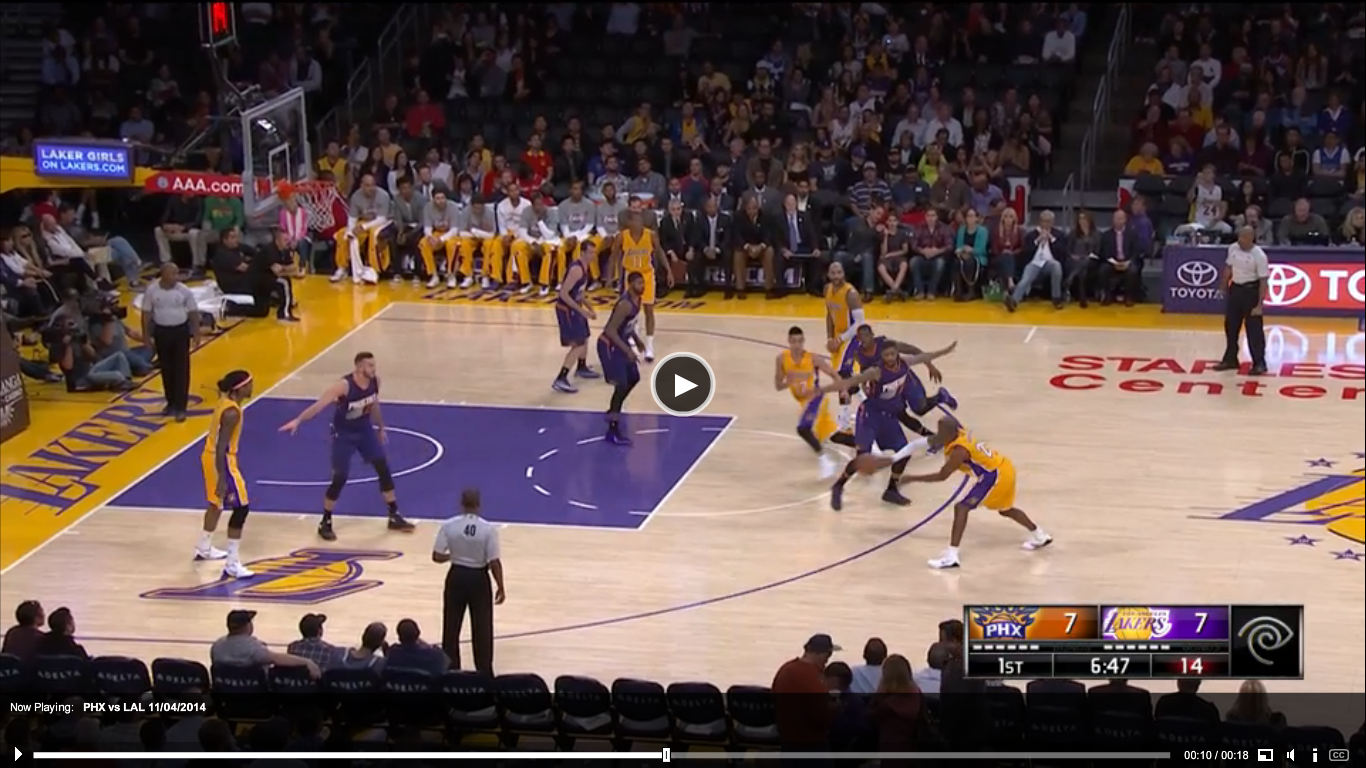 Lin now has a step on Bledsoe as Kobe leads him into the lane with a pass. 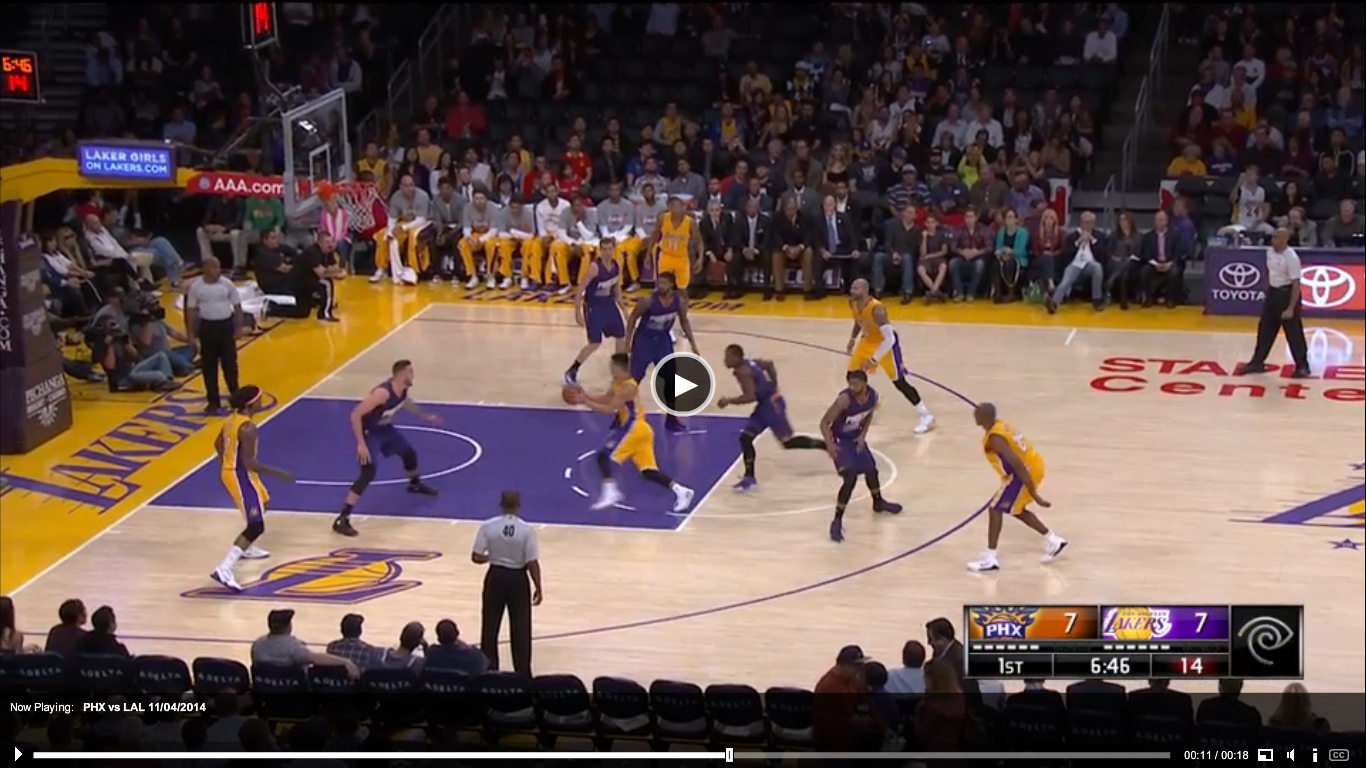 Lin has a clear path to the rim, as Plumlee never commits to contesting Lin's shot, as this next screen grab illustrates: 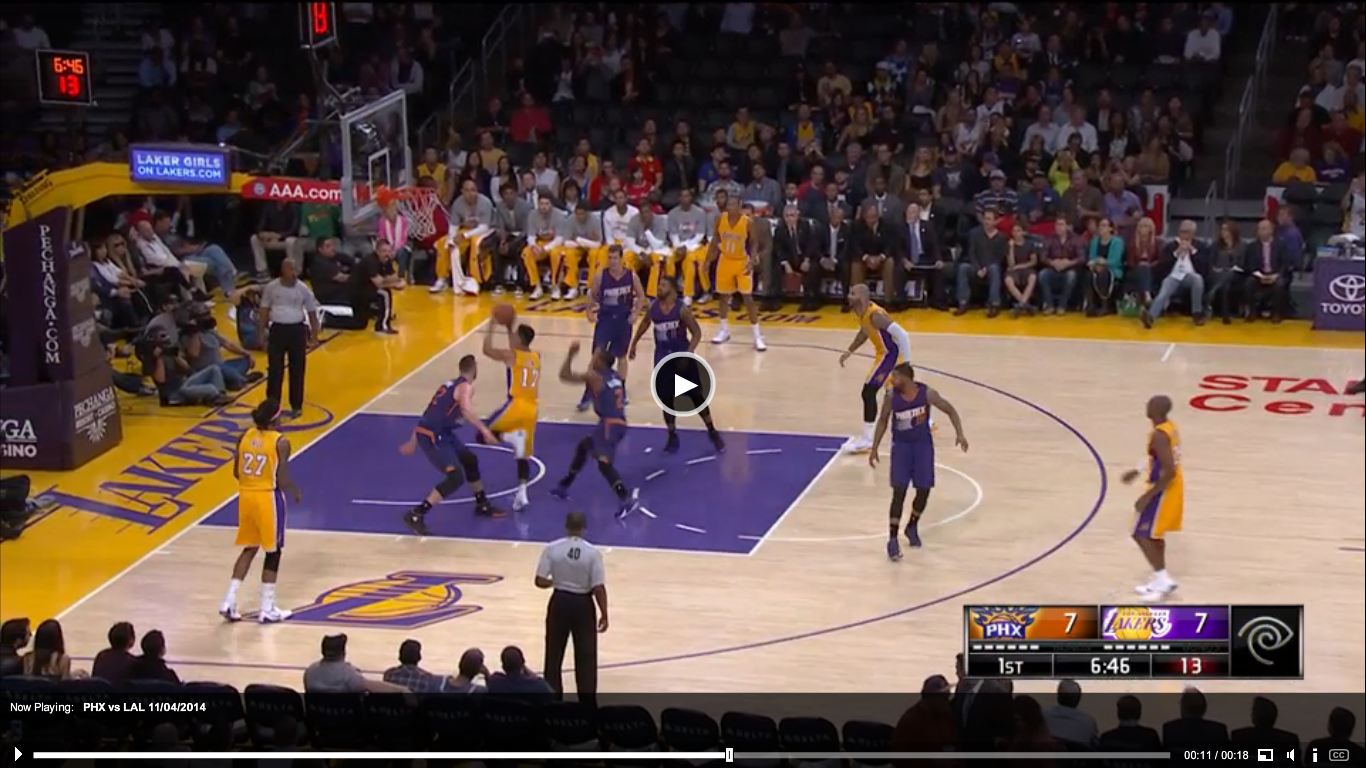 This was a very simple set, but I felt it this was a good example of how Lin's speed could be utilized outside of his bread and butter pick-and-roll sets or just spotting him up on the arc.

Overall this season Lin has not been put in positions where he has the best chance to be successful. For one thing, too often he has been forced into taking pull up jumpers like this (40.5% of Lin's shots have been pull-up jumpers): 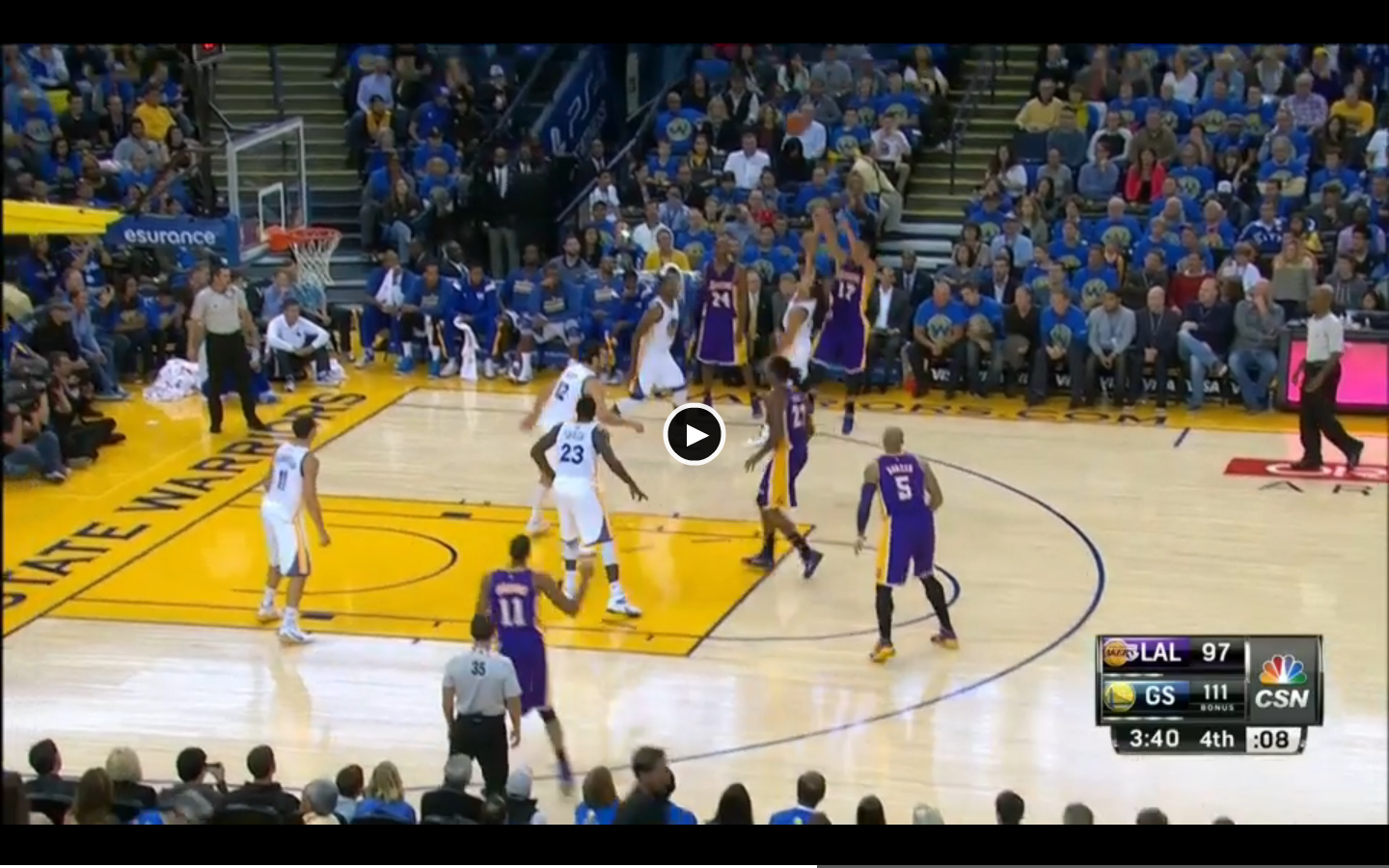 Or this possession from the end of the Suns game, when there was almost no off-ball movement from the other players outside of the initial unsuccessful 1-2 pick-and-roll until Lin was finally forced to chuck this jumper late in the shot clock: 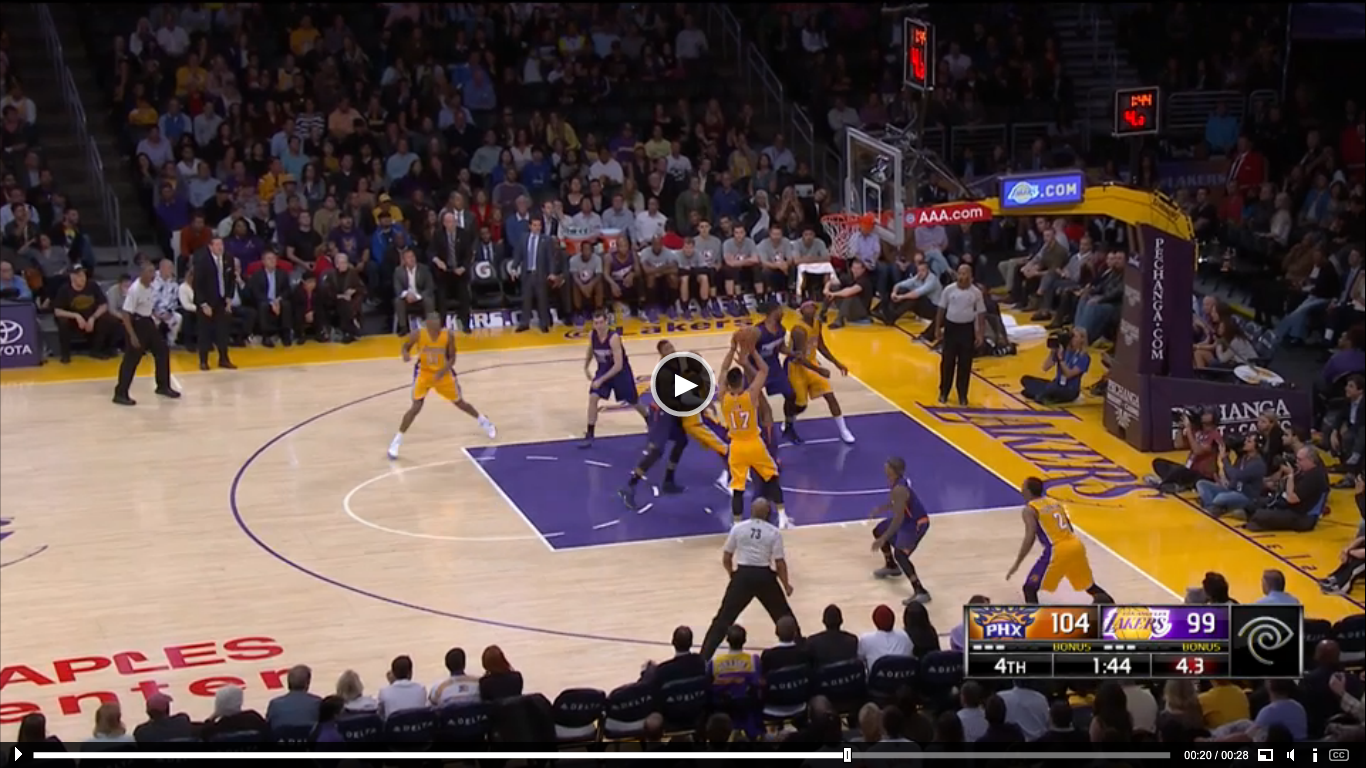 Or even this one:

He made that last one in clutch time, but that still does not make it a good shot. Lin has been much more effective on catch and shoot jumpers (shooting 50% on the year, with an effective field goal percentage, factoring in the added value of three pointers, of 75%) than pull-up ones (20%, 23.3 eFG% ) per NBA.com. Also reinforcing the idea that Lin has been better when he is not forced into doing too much is this chart demonstrating his decline in shooting percentage the longer he dribbles.

This is a very small sample size, which is important to keep in mind. Still, in this chart one can see that both Lin's FG% and eFG% drop steeply once he starts taking more than one dribble, implying that he is better when quickly getting the ball and making a decision than when he is forced to probe the defense for long periods of time, overextending himself.

From looking at Lin's statistics in conjunction with his game tape, I feel as though we can jump to a couple of early conclusions. For one thing, the coaching staff and Lin himself need to find a way to redistribute some of his pull-up jumpers into either catch-and-shoot jumpers or more drives to the basket in order to help maximize his efficiency. The Lakers should attempt to involve Lin in more types of pick-and-rolls of varying types, as well as utilizing his speed into off-ball movement in order to scramble opposing defenses more.

"Linsanity" is not coming back. That was Lin's peak thus far, thriving with a roster and system perfectly suited for his talents, especially compared to the mismatched, misused, and sometimes broken roster of this year's Lakers. Lin knows this and has gone on record as saying he wants to move on from "Linsanity." He also knows that this squad is not playing well right now, telling reporters "We're not necessarily playing the smartest basketball right now," after Tuesday's loss to the Suns. Adjusting how Lin is being used in the offense could go a long way in helping the team play "smarter" basketball.