The Lakers' help defense hurt them against Orlando

Share All sharing options for: The Lakers' help defense hurt them against Orlando

The Los Angeles Lakers have not  been very good during their seven-game Grammy road trip. Winning just two games out of the six they've played thus far is a pretty easy indicator that things have gone south for the purple and gold in a hurry. If we pull back a bit further and look at the record since Dec. 21, there's that glaring 3-15 record winking at Mitch Kupchak while it holds the team's 2014 first-round draft pick like a soul mate.

What happened Friday night in Orlando isn't new. The team gave up offensive rebounds, transition baskets and way too many third quarter points. What stood out, though, were the wide-open three-pointers they continually gave up. That third quarter collapse was brought on by the Magic shooting 66 percent from deep.

Poor rotations, like the one above, show the lack of communication and understanding between teammates. Ryan Kelly switched onto the ball-handler, giving Marshall the chance to rotate back to his man. Instead Meeks charges from the corner to closeout on Harris, Marshall doesn't rotate onto anyone and Pau Gasol isn't in any position to get to the corner.

These things happen when you're dealing with players who are barely getting integrated into the system. Ryan Kelly, despite being on the roster all season, is just now starting to play consistent minutes. Kendall Marshall was brought in mid-season once injuries essentially forced the front office to bring on a body. Manny Harris joined the team in Boston during the road trip. All of these little things, in addition to the rotating rotation, make for a lack of cohesion at a team level.

It's not just the new guys, either. Look how far Wesley Johnson drifted away from Tobias Harris to help Jodie Meeks over the top. 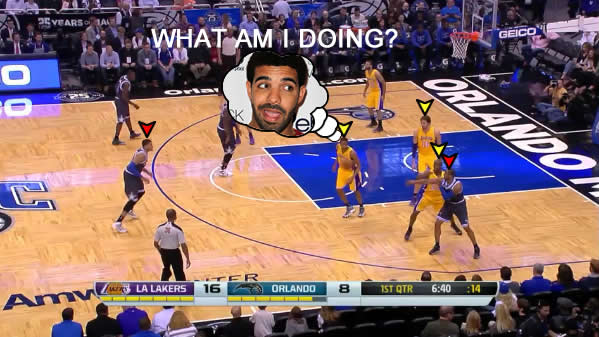 Pau Gasol is already helping over the top here. There's absolutely no reason for Wes to slide that far over. Harris drained the open look. Wes isn't the only one guilty of hurtful "help" defense. Meeks is a constant violator of senseless defensive decisions, like his choice to hedge into the paint here and leave his man alone on the perimeter: 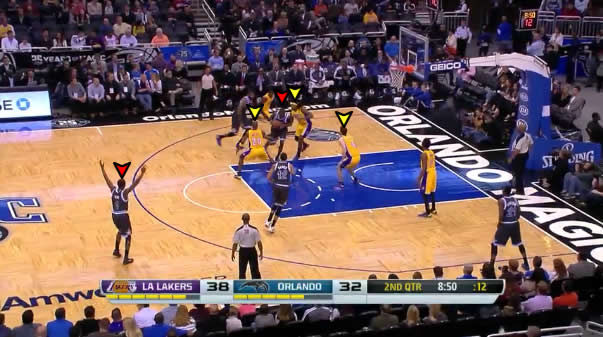 It's difficult to understand the logic in some of these rotations. Marshall decides to collapse onto Afflalo in transition despite the Lakers having Meeks and Kelly in position to stop him around the him, instead of tracking his Jameer Nelson. This goes as expected. Basket, Orlando. 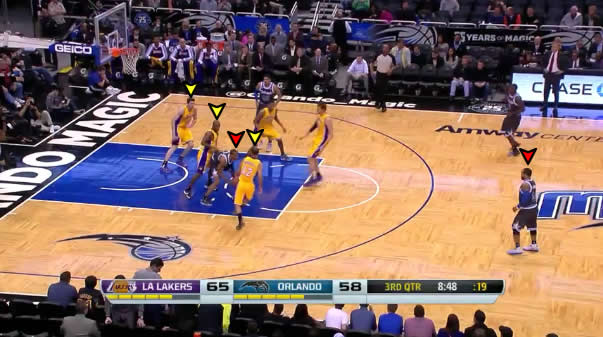 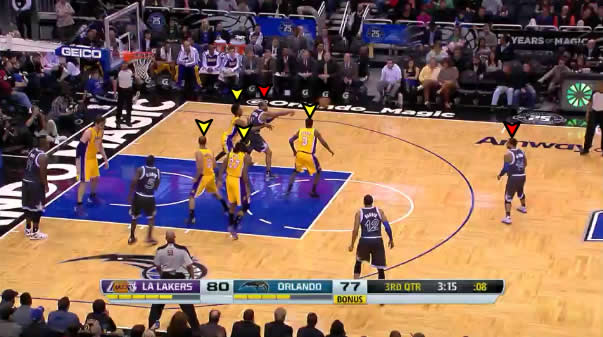 Even when the team does a reasonable job recovering from a defensive breakdown it's too little too late.

Odds are players are going to sink some tough shots, it's a given. No defense is perfect and great shots often beat great defense. But without any great defense to ride on, those easy, wide-open looks have to be minimized. Instead, they've become rampant. An every play occurrence. Blame it on the players. Blame it on the coaching staff. Blame it on a giant road trip and back-to-back. Blame it on unfamiliarity.

It's there. A conundrum for a team lacking talent, healthy bodies and time on the court together. All that talk of terrible defense in the off-season is coming around as the season drags along.