As the Lakers move up in the draft, Noah Vonleh should be one of their top targets

The Lakers have holes just about everywhere on the roster, practically mandating a best player available (BPA) approach to the draft, but it is increasingly becoming clear that should they land outside the elite prospects at the top, Noah Vonleh would be an excellent fit for their needs.

Share All sharing options for: As the Lakers move up in the draft, Noah Vonleh should be one of their top targets

Not a lot has changed at the top of draft boards since the start of the college basketball season, the top seven or so players remaining remarkably consistent on most boards, but we have received a few wrinkles as scouts and executives have dug deeper into the play of these celebrated players. Joel Embiid's meteoric rise to the best prospect in the draft and the steady erosion of Julius Randle's once impeccable draft stock have been two such developments. The latter in particular has been at the nexus of a fascinating discussion about the role of frontcourt players in the modern game and how much the game has shifted away from traditional post bigs to floor spacers and long, mobile defenders who can operate well in space. The Lakers, no strangers to how post players have led the way to titles time and time again and now operating under the auspices of a coach who ushered in this new era of offensive basketball in Mike D'Antoni, will be at ground zero of this issue due to their position in the draft and need in the frontcourt.

To provide some context for this discussion, some required reading is a recent piece by SB Nation's Jonathan Tjarks on how Randle's relative lack of length -- a below average 6'11'' wingspan -- severely hampers his long-term ceiling. In short, Randle doesn't have the physical tools to be a plus defender in the modern NBA because he lacks the requisite length to protect the rim and the short range quickness to adequately defend in space. To compensate for this, Randle has to not be a drain on offensive spacing, which he doesn't overly contribute to at Kentucky, reports to his accuracy from range in high school notwithstanding. As a result, Randle fails to fill either of the roles that modern bigs really need to provide in order to be effective in most roster contexts.

This might seem like a bizarre objection considering the reality of what Randle currently is on the court: a ferocious post scorer with great body control who uses sheer power to get what he wants around the rim. Even with the wingspan concerns, there is not a lot of argument that Randle can't be effective at the pro level. Combined with his superlative rebounding -- an excellent 19.5 TRB% and spectacular 15.5 ORB%, the latter very comparable to current Laker offensive rebound machine Jordan Hill -- Randle will definitely be in the league a long time as a pretty good player. The issue is that Randle is practically an anachronism in a league that values efficiency more than ever and sees the post as a poor way of generating consistent offense. In order for Randle to be effective, he needs a very specific kind of player alongside him in the frontcourt, basically a clone of Marc Gasol who provides huge value on defense and can stretch the floor.

Needless to say, there aren't a lot of guys like that in the league. Randle right now in fact is saved from having to worry about this problem because his frontcourt counterpart at Kentucky in Willie Cauley-Stein is an enormous big man with decent quickness and a very significant shot blocking presence on the interior. But even Cauley-Stein wouldn't be sufficient to make such a partnership work in the NBA because of the lack of spacing either frontcourt guy brings to the table. So the problem that Randle presents is one of roster construction: the team drafting him will have to locate the right frontcourt counterpart for this to work out in the long-term.

For the Lakers, that isn't something that they are able to deal with right now given that they are currently projected to have no one from their current frontcourt aside from Robert Sacre on the team next year. Unless you think Sacre utterly maximizes his current skill set as a big who rolls hard on the pick-and-roll, plays good positional defense, and hits a 15 footer every now and then into star level in the space of the next year, then the Lakers don't have the needed guy to pair with Randle. Honestly, the only way they do is by getting Marc Gasol himself as a free agent in 2015 and that's simply not a thing they can rely on happening. 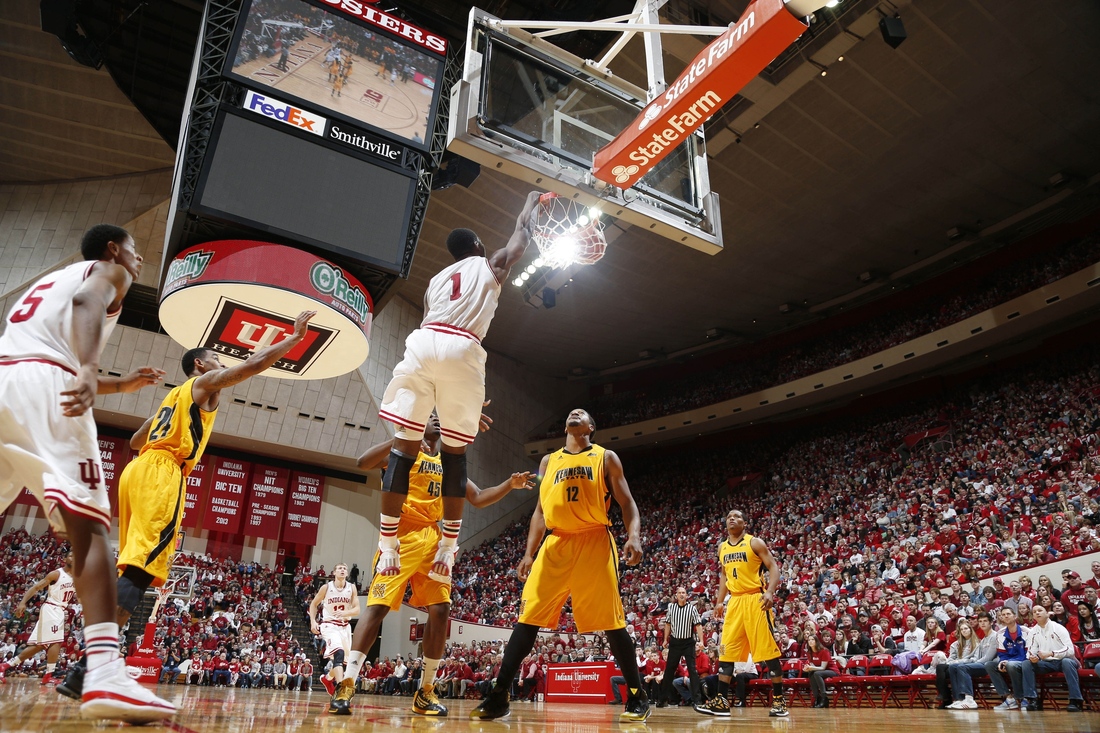 That brings us to the reality that whomever the Lakers end up drafting, it should be a guy that can be immediately slotted into a position without exerting an undue influence on how the rest of the roster is constructed. In other words, that player should be versatile, able to fill multiple roles, and not need specific personnel to succeed with. Someone like Jabari Parker, for instance, could be a top scorer in just about any system, work at the three or the four, and offer a lot of flexibility in terms of who the team could bring in as a result. With the shape of the Lakers' roster so fluid in the upcoming years because their holes will be filled in the draft and free agency, the guy they pick in the former should be one that is almost always useful despite whomever is around him.

All of Randle's weaknesses, whether wingspan, lack of defensive utility, or poor range, are strengths for Vonleh

Such a description doesn't fit Randle, but it does for a player who has begun a steady rise up several draft boards in Indiana's Noah Vonleh. It's a really interesting case study for this discussion since all of Randle's weaknesses, whether wingspan, lack of defensive utility, or poor range, are strengths for Vonleh. Listed at 6'10'' with a 7'4'' wingspan, Vonleh has been introducing the three-point shot into his game while being a huge force on the glass with a 20.6 TRB% and operating as the mainstay of Indiana's defense. Vonleh isn't chopped liver in the post either and is really only limited from producing more in that respect because of how terrible his supporting cast is at Indiana, although the more important part is that he brings both the shooting and defensive utility you want from a big.

And that's something that works regardless of who his teammates are. A bunch of shooters on the perimeter with Vonleh in the paint acting as the post man? He can do that, seeing that he shoots over 70% at the rim. Paired with a post guy who wants to be closer to the basket? Vonleh can stick on the perimeter as a spacing threat. And on defense, while projected as a four, one has to imagine that once Vonleh fills out more, he could play at the five as well since he's only 18 right now. So what Vonleh ultimately brings here is flexibility in roster construction: he can work with practically whomever the Lakers manage to get in free agency as his frontcourt counterpart because he has the skill set to be effective in multiple roles.

Most of the prospects in the top seven also have that attribute, although, of course, there are limits to this versatility. You aren't going to get a post guy to go with say Joel Embiid just because he can space the floor in a pinch or move Marcus Smart or Dante Exum to the two to accommodate another point guard due to their superior size at the one. They don't require specific personnel in the long-term to be effective, however, and that's the important part in this discussion. The Lakers' pick will become an important part of whatever future core they are building, but shouldn't in and of itself overly dictate how that roster is put together.

Does that mean that the Lakers shouldn't pick Randle? Not necessarily. CBS Sports' Matt Moore penned a solid defense of Randle that shows you that this isn't a black and white issue by any means. At the end of the day, talent is talent, but it should make them think twice about the consequences of what roster construction with him would require. On the flip side, it should be a major point in Vonleh's favor that this isn't a problem and in fact he isn't necessarily tied to one position or role. Now, this doesn't mean that the Lakers pick him ahead of the three elite guys at the top in Embiid, Wiggins, or Parker, or that he's even a better call than Smart, Exum, or Gordon. There's still a long way until the draft and we have a lot of college basketball remaining, so prognosticating one way or another is premature, but it tells you something when voices as respected as Chad Ford and Kevin Pelton are already thinking about why Vonleh isn't considered higher than Randle on most boards. Considering the Lakers' current roster, it is hard to disagree with them.