Why Jordan Hill is best frontcourt defender on Lakers roster

Jordan Hill has become the Lakers most versatile frontcourt defender on the roster with the glaring hole Dwight Howard has left in the Lakers defense.

Share All sharing options for: Why Jordan Hill is best frontcourt defender on Lakers roster

Jordan Hill is far and away the best frontcourt defender on the Los Angeles Lakers. With the individual defensive weaknesses of Pau Gasol and Chris Kaman, the Lakers will need to use Hill to balance out the frontcourt. If the hiring of Kurt Rambis to join Mike D'Antoni's coaching staff indicates one thing it's a nod that the Lakers will be doing something different on defense in 2013-2014. It might be terrible, might work out, but there's going to be some shift in what they did on defense last season, which was __________.

Hill is at least five years younger than both Kaman and Gasol and is the most mobile defender of the three. Hill's injury problems serve as a barrier to his productivity. He has now become the most important frontcourt defender on the Lakers' roster.

His individual athleticism and foot speed is solid for a 6'10 frontcourt player. While he isn't in the elite category of hybrid small forwards who slide up, he's still very good.

Here, Hill rotates onto Manu Ginobili as he moves off-ball. Hill is pulled out to the perimeter because of the switch and deflects Ginobili's shot:

Hill being able to chase a player onto the perimeter in that scenario is something that Gasol and Kaman cannot do. Obviously he isn't defending LeBron James or Kevin Durant, but his mobility is a utility the Lakers can use in their defensive schemes.

In fact, the Lakers even gave a glimpse of what a strong side zone defense could work.

Here the Lakers are actually in a strong side zone formation. Gasol has floated to the elbow to cover over the top on dribble penetration, his man on the perimeter and to be the player that Chris Duhon funnels him into. Applying pressure to ball-handlers is a principle of the strong side zone, which Duhon is doing here. Metta World Peace is the third defender on the strong side in the corner.

That leaves Hill to be the mobile big who helps at the rim as the last line of defense or has to slide back out to defend the weak side corner three. 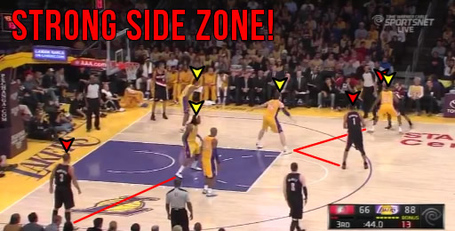 The Blazers pass to Sasha Pavlovic in the corner and Hill immediately rotates from the paint.

Hill picks up Pavolovic on the perimeter and deflects the shot. 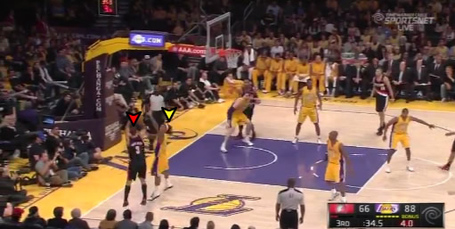 Here's the sequence in action:

The strong side zone is a great way to hide the stone pillar legs of Kaman and Gasol and could be used depending on lineups and match-ups. The Lakers will also need the perimeter defender -- in the example above Kobe Bryant -- to be able to close out and play passing lanes. The Lakers will have options in that area with Wesley Johnson, Nick Young, Marcus Landry and Elias Harris to kick the tires of as of now.

Where Hill really outshines Kaman and Gasol is in defending the ball-handler out of high-screen sets.

Here, he'll cut off dribble penetration twice on the perimeter, then blocks the shotr after sliding with the ball-handler to the rim:

Schemes aside, having a player who can defend the ball-handler is necessary in the NBA. Hill should see floor time for this reason alone. A structured defense could help Hill grow as a team defender and is one of the keys to Rambis discussed with Los Angeles Daily News' Mark Medina :

Here's another example of Hill's individual efforts serving as the glue to the Lakers' team defense.

David West set's a high screen for D.J. Augustin. Hill can crowd closer into the ball-handler than Gasol or Kaman. He picks up Augustin and cuts off his first probe from the screen. 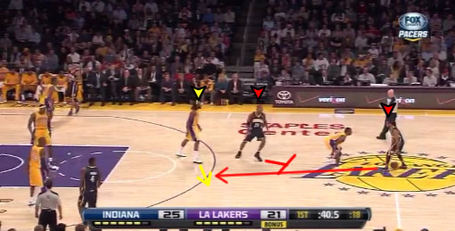 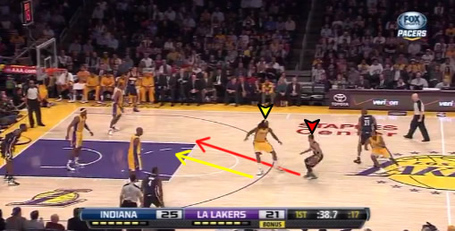 Hill rotates and shifts with Augustin as he cuts to the elbow. Augustin passes back to West who has stepped up to the free throw line. Hill rotates back onto West. 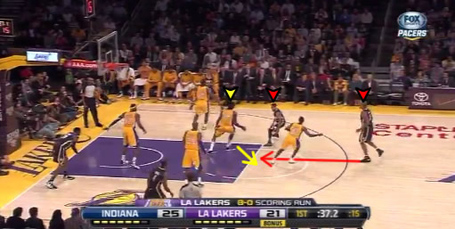 West faces Hill up, who does a good job of staying in front of West who drives straight into him. Hill doesn't foul and forces West to put up a tough shot. 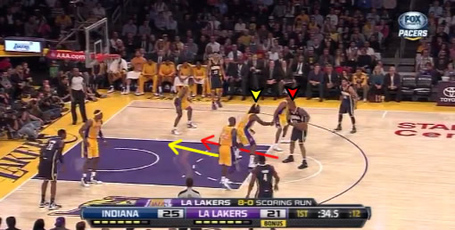 Video of the possession:

Hill is a versatile, raw frontcourt defender who has an elite talent that hasn't even been discussed yet, his rebounding. Last season he pulled down 20 percent of available rebounds while he was on the floor which would have placed him in the top five in comparison to the 2012-2013 NBA season leader list. His per-36 rebounding averages each of the last two seasons are 12.2 and 13.0, respectively. Having a player who creates second-chance opportunities is great, but stopping second-chance opportunities will be critical for the Lakers. Hill's career defensive rebounding percentage is 20.1.

This isn't to say that because Jordan Hill might be healthy for 50 percent of the season the Lakers are in fantastic defensive shape. He's a serious injury liability, and behind him there's no proven talent on the Lakers roster to play in the frontcourt.

Despite the obvious synergy on offense between Gasol and Kaman the Lakers need to balance their defense and lineups around matchups. Jordan Hill is the best defensive frontcourt player on the Lakers and should see significant time on the floor. Based on the depth chart and unknown talent behind him, however, it shouldn't be much of an issue to shovel minutes at him if only because of his great production on the glass.