NBA Commissioner For A Day: All salaries should be created equal

Share All sharing options for: NBA Commissioner For A Day: All salaries should be created equal

Today is the start of this year's series of SB Nation theme days, where the entire SBN NBA network gets together to discuss a single topic. Today's topic: What would you do if you were commissioner of the NBA for a day?

The other night, I was lazily half paying attention to The Daily Show, as I am wont to do, when I heard a familiar name pop up in an altogether unfamiliar place. I paused, rewound, and confirmed my ears did not deceive me; for some strange reason, John Oliver was talking about Dwight Howard. (13:30 mark). He was doing so because Howard's decision to choose the Houston Rockets over the Los Angeles Lakers made its way onto Fox Business Channel, who highlighted a report by anti-tax advocates Americans for Tax Reform claiming Howard's choice as a victory for the "No State Income Tax" policy of Texas over the "High State Income Tax" policy of California. The quick breakdown is this: Despite the fact that the Lakers could offer Dwight a larger contract, both in length and in annual salary, California's high state income tax rate (especially on the very wealthy like Dwight, who pay a marginal tax rate of 13.3% ), in comparison to Texas' lack of state income taxes, would cause Dwight to take home less money at the end of the day as a Laker then he would as a Rocket.

Commish for a day 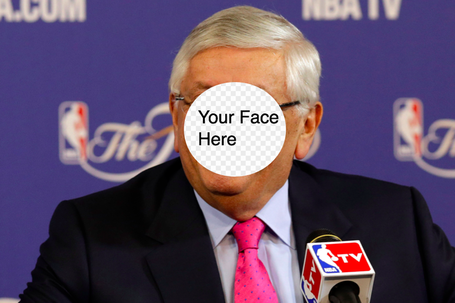 Expanding to 31, no more one-and-done freshmen, changes to the D-league? Check out SB Nation NBA's thoughts on what they would do as NBA commissioner for a day.

It is an angle of Dwight Howard's free agency that was covered, both here and elsewhere, when Dwight's destination was still a question, but quickly forgotten once his choice was made. I don't recall any follow up reports of people asking Dwight whether the lack of a state income tax in Texas was a part of his decision. Once Dwight chose Houston, it no longer mattered whether he did it for the potential championships, or the lifestyle, or because he could actually keep a bigger portion of his paycheck there. All that mattered were the league-wide ramifications of a superstar actually choosing to leave the Los Angeles Lakers, and whether the Rockets could now contend with a Howard-Harden core. Without this unexpected reminder, I might have completely forgotten about my first thought when learning that Howard could make more money on less salary by signing in Houston.

The problem here is not that California has a high state income tax rate, nor that Texas doesn't have an income tax at all. Different states have different tax rates for different reasons, political reasons which have absolutely no place in a discussion on a blog about sports. If you want to do business in California, you have to deal with the higher state income tax; that's just the cost of doing business, and it is a cost that doesn't exist in Texas. You must weigh that additional cost against other factors like location, demographic, marketability etc. and determine what's best for your business. Plenty of businesses still operate in California, even the ones that pay out massive salaries, and you can bet those businesses pay a premium for their top talent so as to compensate for the tax advantages of other states. Even if, for example, you have to pay $15 million a year in California to get the same talent you could get for $10 million in Texas, there are still situations in which it makes sense to do so.

Unless you can't. Not because you can't afford to, but because you literally can not do it. Because the maximum salary you can offer is mandated by an entity that oversees both you and your "competitors". An entity like, say, the NBA.

That's the problem. The NBA, in collectively bargaining with its member owners and the players who make up its league, has deemed certain levels of maximum salaries for certain situations. The "max contract" is the most obvious example, but hardly the only one. A majority of teams are over the league's salary cap, and can therefore only offer players the mid-level exception (MLE), and so the MLE becomes a "max" of its own, in which many teams might be competing for the same player with the same salary offer. After the MLE disappears, the same situation happens with the veteran's minimum. At three different levels of salary, from the franchise superstar down to the end of the bench, the league has created situations in which teams must sell players on factors other than salary, because the salaries on offer are all the same. This was done with good intentions, to keep the Lakers and the Knicks and the Celtics from simply out-spending everybody else like the Yankees and Red Sox and Dodgers do in baseball.

It was done to level the playing field, and instead un-leveled the field in a different way, in favor not of big markets or small, but of the teams that just so happen to exist in states with friendly income tax rates.

Lest you might think I'm some spoiled Lakers fan crying about a situation that just happens to not be in my favor, let me be clear: The Los Angeles Lakers are NOT the reason why this situation needs to be fixed. Los Angeles has plenty of natural advantages that will ensure the Lakers won't always be turned down just because of tax dis-advantages. The same could be said of other big market teams with high tax rates like the New York Knicks, Boston Celtics and Chicago Bulls. But, though there is a slight correlation which will not be discussed (again, politics) between some of the country's major markets and higher state income taxes, that correlation still leaves plenty of the league's dis-advantaged teams fighting an up-hill battle on multiple fronts. Check out this map of state tax rates (the map is for the 2012 tax year, and is no longer entirely accurate, but still gives a good idea of how this issue plays out). 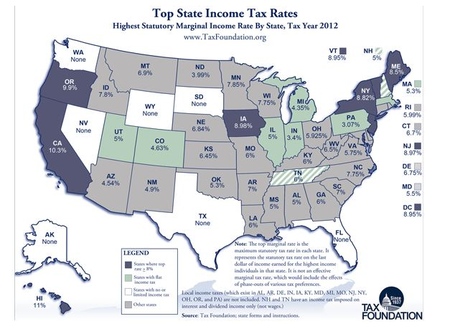 Think about a team like the Sacramento Kings. Sac-town is already a pretty tough sell to potential free agents. It's not the nicest part of the country, smack dab in the middle of miles upon miles of farm land and hardly a metropolitan area of any kind, yet their players are still subject to the same high tax rate (13.3%) as the Lakers players are. On a $20 M max deal, that's more than $2 million a year in paid tax; on a $3.3 M mid-level contract, it's more than $400 K. Who is going to accept that much less money in their pockets to play in Sacramento if they can get the same contract offer from anybody in Texas or Florida? Nobody. (These figures aren't entirely accurate, but I'm simplifying because the details are way too complicated)

And it's not just the California teams, either. Portland is a beautiful city, but the Trailblazers players are subject to Oregon's top marginal tax rate of 9.9%. The Washington Wizards get hit with the Capital's top rate of 8.95%. Milwaukee and Charlotte are often discussed as possible teams for relocation because of their small market size, and both teams play in states with a top rate of 7.75%. How are these teams, short on selling points even before money enters the discussion, supposed to compete with the five teams (nearly 17% of the league) that operate in states with no income tax at all?

If I'm commissioner of the NBA for a day, I'm fixing this. I'm fixing it because it's unfair, but more importantly, I'm fixing it because this problem flies in the face of the very reason these salary limitations exist in the first place.The "max contract" exists because small market teams wouldn't be able to offer a competitive salary in comparison to the big boys for the superstars of the league otherwise. The MLE and veteran's minimum exist to keep costs down (again, leveling the playing field) while still allowing teams over the salary cap some flexibility in being able to fill out their rosters. All of this is done in the hopes that a small market team like Milwaukee can keep pace with a big market team like the Lakers. And, salary wise at least, they can. They can't keep pace, however, with the Orlando Magic, because $3 million dollars a year in Wisconsin isn't the same as $3 million dollars a year in Florida.

But it can be. The solution to this problem is both incredibly simple and incredibly complicated. The simple part is the idea: Make all salary restrictions (the maximum salary, the mid-level exception, the veteran's minimum, mandated rookie salaries, the salary cap, the luxury tax, everything) based on take home pay. That way, when Chris Kaman signs for the same mini-MLE that Andrei Kirilenko signs for, both of them will end up with the same money in their pockets, even if the Lakers have to pay Kaman a few hundred thousand more dollars to make that happen. The actual numbers themselves will need some tweaking, because a salary cap of $58 million pre-tax is very different than the same number would mean post-tax, but the key here is to determine the salary benchmarks which are supposed to be even for all teams based upon a criteria which is actually even for all teams.

To do so is incredibly complicated, because (and I don't think I'm making a political statement in saying this) the way taxes are computed in this country is crazy. Figuring out what a player's actual salary needs to be in order for them to take home $2 million dollars involves a ton of calculations and consideration of deductions at the state and federal level, to say nothing of the absolutely bat s**t insane phenomenon in which players pay state taxes not based on their home city, but based on where they play every individual game for which they are paid (Translation: NBA athletes are actually paying taxes to every state with an NBA team, based on how many games they play in the state). I am not smart enough to even consider suggesting how this would be done. But I have faith in the intelligence of other people, and surely the NBA and its teams could put the CPAs I'm sure they already have on retainer to work and figure out how to make this all happen.

Making the salary numbers which dictate the league operate on a take home pay basis won't completely level the playing field, because it is not possible to do so. You can't put a value on the sunny beaches of Southern California or the bright lights of Manhattan, or on any of the other idiosyncratic differences that highlight (and lowlight) all the different places where NBA teams reside. With all salaries being equal, certain places will still have advantages, often significant ones, over other places.

However, I think we can all agree that the first step of limiting salaries so that all teams can be on a level playing field is to actually ensure that the limited salaries are the same across the league. If I were in charge of the NBA for a day, that would be what I'd do.