The Lakers may have lost Dwight Howard, but they haven't lost the faith of the national audience outlets. An in-depth look at the 2013-2014 Lakers season schedule.

The first thought that leapt out when looking at the 2013-2014 Los Angeles Lakers season schedule was, "uh, that's a rough start." The second might have been that the Lakers still have an awful lot of nationally televised games; a total of 29 appearance including NBA TV. That's more than the back-to-back-champion Miami Heat.

The first set of games

The first national game is opening night for the NBA and Lakers. Pitting the Lakers against the Los Angeles Clippers is an easy draw for TNT. It's opening night anyway, so slapping the cross-hall teams against one another is a safe bet. Los Angeles is a giant market to tap into.

With that said, if Kobe Bryant is ready to start the season, this could pay off in huge dividends for ratings. And you can't tell me you don't want to see what happens when he steps back onto the court after the Achilles tear, anyway, national audience. Plus the added intrigue from the Doc Rivers draw? Well done. 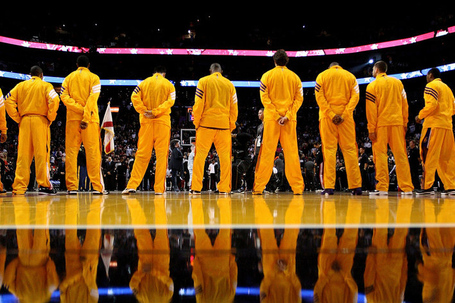 The league cashes the Lakers' first back-to-back series to open the season. Los Angeles shoots up to Oracle Arena to face the Golden State Warriors as they open their new season with Andre Iguodala on board on NBA TV. This is another easy draw, allowing the league to run the Lakers out for both nights of inaugural basketball.

The first three games of the Lakers' season are national games. Friday, November 1 L.A. hosts the San Antonio Spurs. This will also be ESPN's first chance to air the Lakers with NBA TV and TNT taking the first two games.

The Lakers proceed to play the Atlanta Hawks and Dallas Mavericks out of the spotlight, but the next national gamecomes against the Houston Rockets on November 7. This game will be in Houston and is the first meeting between Dwight Howard and his former team. While there's no telling when Bryant will be back in the lineup, this is another big draw game that will easily sell. Congratulations, TNT, you got the first blow in this one. It's worth noting that all four meetings between Houston and L.A. will be nationally televised.

After the Rockets showdown the Lakers spend six games out of the spotlight until ESPN airs the next meeting with the Warriors on November 22. Airing both meetings with the Warriors seems odd, but stirring the California market by airing the Pacific Division rivals a second time is a safe bet for the second-half of a Friday double header. It's a low-risk, high-reward type of game.

December 13 marks the next national television game for the Lakers who travel to Oklahoma to face the Thunder for the first time in 2013-2014. December enters territory where Kobe Bryant "might" be back if the 7-9 month timetable. This is in the middle of seven-month territory and will have a large draw with Oklahoma City regardless. This also marks the first game of a four-game road trip with games in Charlotte, Atlanta and Memphis.

ESPN will give another roll of the dice for the Lakers on Friday the following week when the Minnesota Timberwolves visit Los Angeles. This will be the first Lakers game at home in 10 days and could be another shot at a Kobe return game with the team returning to L.A.

The Lakers always play on Christmas Day. Christmas Day Lakers games and the Dallas Cowboys on Thanksgiving Day are the safest bets you could make in the history of sports betting. How many more LeBron and Kobe storylines will the league be able to sell, however? The NBA was never gifted the lustful LeBron James, Kobe Bryant NBA Finals, and time is ticking to Bryant's unsure future and a summer that could see James opting out of Miami.

Thanks for traveling to Los Angeles for Christmas Day, Miami!

Christmas Day is the last nationally televised game for the Lakers in 2013.

The Lakers play eight nationally televised games in 2013. The first three games of the season, featuring three conference "rivals" and the dice roll of an early returning Kobe Bryant. The first game between the Rockets and Lakers was an obvious choice, and the Lakers will always play on Christmas Day. Four games are sprinkled in between with the Timberwolves, Warriors and Thunder games not leaping off the page, but still likely enough to draw ratings.

The first nationally televised Lakers game in 2014 will be against the Rockets on January 8. If Kobe Bryant didn't play in the first meet between the teams, this game could serve as the first actual Kobe vs. Dwight meeting. Bryant had surgery to repair his Achilles on April 13 and would be five days away from the nine month mark. TNT may have grabbed the first available game between the two, but ESPN may have the more realistic date for the two to meet.

Following that up, the Lakers next game is against the Clippers on Friday, January 10 and will be nationally televised. ESPN continues pushing salable Lakers games on Fridays and catches the second meet between the two L.A. teams.

Mike Brown, Kyrie Irving, Earl Clark and Andrew Bynum return to Los Angeles on Tuesday, January 14 but are not scheduled to be nationally televised.

The Lakers' seven-game Grammy road trip begins on January 15 in Phoenix, followed by Boston and Toronto.

TNT grabs the next two glamorous Lakers games with the next two Grammy-trip games in Chicago (1/20) and Miami (1/23). Kobe Bryant will have cleared the 7-9 month bar just a week prior to these games.

Orlando is the sixth team in the Lakers gauntlet, which ends at Madison Square Garden on January 26. The 26th marks the first Sunday of basketball aired on ABC and will follow-up an NBA Finals rematch of the San Antonio Spurs and Miami Heat.

On April 9 the Lakers begin a six-game home-stand by hosting the Bulls. TNT will air this game.

From February 13 through February 23 the Lakers will be televised in each game they play. This is a key NBA stretch with the trade deadline (expect many sauces) and All-Star weekend. The Lakers face the Thunder (2/13), Rockets (2/19), Boston Celtics (2/21) and Brooklyn Nets (2/23) in this stretch.

February 19 may be the biggest hyped game of the year with Dwight Howard visting the Lakers for the first time since he left Southern California. ESPN nabs a huge game with this one.

After the run of four straight national games, the Lakers skip ahead to March 6 where they face the Clippers. This begins the toughest six-game stretch for the Lakers 2013-2014 season. After facing the Clippers at home they fly up to Denver to face the Nuggets on the second half of the back-to-back set on March 7.

This is a brutal stretch of games that leads off with a back-to-back that ends in Denver, one of the places that is often called a "schedule loss" in that situation, and features either the Spurs and Thunder in the next four games. The only upside to this stretch in the schedule is that in the Lakers have eight days without a game over a 12-day span.

The Lakers end a four-game home game stretch on March 25 when Metta World Peace makes his first and only visit to the Lakers since he was amnestied and signed with the Knicks. TNT will have that for you.

If the Lakers happen to be on the edge of a playoff berth, much like they were in 2012-2013 this late in the season, then the national broadcasts have everybody covered. Five of their nine games in April will be nationally televised, beginning with a home game against the Trail Blazers on April 1.

The Lakers visit the Sacramento Kings, who love hosting Los Angeles, and then return to Staples Center to face the Dallas Mavericks.

IF the Lakers be teetering on the eighth seed, the close of the season could be the final blow to any playoff hopes.

Month with most away games: January (10)