"He talked about what I need to work on for this coming summer," Hill told ESPNLosAngeles.com. "My jump shot, he definitely wanted me to work on my outside jumper."...

Only 32 percent of Hill's field goal attempts came from outside of the paint, according to NBA.com. Here's Hill's shot chart from the 2012-2013 season: 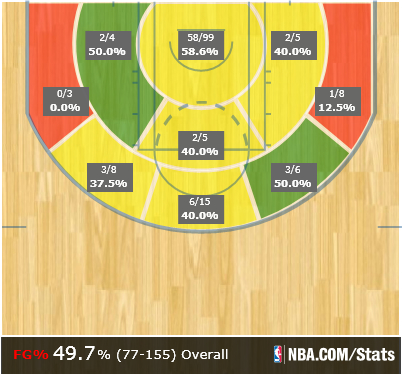 The Lakers added depth to their frontcourt rotation with the addition of Chris Kaman with their mini mid-level exception. They also drafted stretch big man Ryan Kelly out of Duke and signed Elias Harris two a two-year deal. Marcus Landry is also expected to have a guarantee with the Lakers and will be at Lakers training camp.

Hill suffered a torn labrum in his hip which caused him to miss 53 games last season because of injury. He made a return at the end of the first-round of the playoffs, but played in limited minutes. Hill also told McMenamin that his hip is now painless and he's able to do "everything" without any issues:

"I feel great," Hill said. "I feel good on (the hip). I'm walking around with no pain. I'm jumping, I'm strong. I'm doing spin moves. I'm doing everything right now that involves my hip and no problems."