Kobe Bryant's future with the Lakers is the next step

The next step for the Lakers is to plan out their future with Kobe Bryant.

Share All sharing options for: Kobe Bryant's future with the Lakers is the next step

As the Los Angeles Lakers move on from the departure of number 12, it's time for the front office to take the next logical step and work out a contract with the man who has run Los Angeles for a decade. The man who hasn't worn purple and gold armor to protect himself, but to defend the kingdom his entire life. The time is now for the Lakers front office to hammer out a contract extension with Kobe Bryant. Before they reach free agency in 2014 and before they can use that 2014 first-round draft pick, the Lakers will have to figure out the details of moving forward with Bryant.

With uncertainty in the air for the Lakers, the most consistent piece of the franchise is where they must look to restore order.

From a financial standpoint it's in the Lakers best interest to sort through Kobe's future sooner than later. Bryant himself stated he intends to make a decision on his future this Summer -- albeit before he tore his Achilles -- but everything he has said since indicates he isn't ready to retire. The Lakers front office was prepared to begin discussions with Bryant as soon as it was legal under the Collective Bargaining Agreement, which came almost immediately after he tore his Achilles, ESPN's Ramona Shelburne reported on June 14. 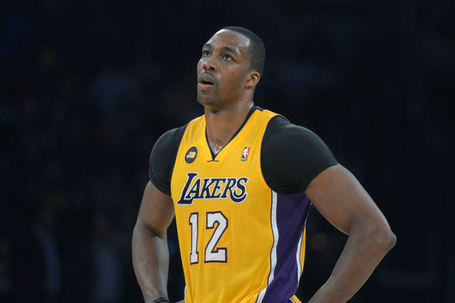 The Dwightmare is over, at long last. However, as we all wake up the next day without Howard hanging over our heads, the question remains: how will the Lakers recover from Howard's departure? What's next?

They were ready. He should be ready. This is a conversation that should be happening now if it isn't already. It's time to plan for the future, and Kobe Bryant has become the first step in that movement.

If he becomes a free agent he also becomes a giant cap hold on the Lakers salary. He is due $30 million this season and his cap hold during the 2014 summer will be $31 million, as detailed by Eric Pincus.

A contract standoff while they sort through potential free agents who will surely want to know the plan with Kobe Bryant isn't a strong start to the Lakers' first summer of financial freedom.

Kobe has made it clear to the front office, to the people of Los Angeles, to the Lakers fans worldwide, to his teammates still in the locker room and the teammates that have left he isn't going anywhere. The declaration of having three years of playing at a high level was a signal to the world -- even without Dwight Howard I'm not going anywhere. Don't panic, there's still time with me.

Don't bury me after I put up 27.3 points per game, tied a career-high with six assists per game, was above my career average in rebounds at 5.6 per game, had the highest effective field goal percentage of my career at .504 and also had my highest true shooting percentage since the 2007-2008 season at .570.

Don't bury me because of an Achilles injury that I'm going to do everything I can to fight back from. Check the Instagram -- you wasn't with me shootin' in the gym.

Moving forward with Kobe Bryant is a dicey situation for the front office. There's no telling what Kobe returns, when he returns and how he returns despite the confident statements. If there's one man to not bet against when it comes to persevering, adjusting and recovering it's Kobe Bean Bryant.

The Lakers front office knows this. They know he's the alpha leader of the Lakers and weren't afraid of letting him loose. They knew what he was going to say when they invited him to the meeting with Dwight Howard. They watched the dynamic between the two unfold through the season, they've known Kobe since he was a kid out of Lower Merion, yet they didn't put a leash on him or -- at the very least -- have a muzzle ready.

If they didn't expect to move forward with Bryant it doesn't make a great deal of sense to involve him in those discussions.

Dwight Howard was in Lakers territory and they weren't about to let him walk to the front porch without passing the junkyard dog. Howard didn't even open the fence, and the front office never bothered pulling Kobe away from the gate.

If there's one man in Los Angeles who can gather the spirit of the people it's Kobe Bryant. Moments after the decision from Howard became official he said everything by posting a picture of him and future Hall of Fame big man Pau Gasol together and a few hashtags. Less is more.

Kobe Bryant wanted to "come back with a vengeance" and get "two more cracks at a title" before he watched Howard turn his back on the franchise he has protected for so long. Is there any question that spark has turned into a full blown Southern California wildfire since?

The challenge will be finding the numbers -- both in years and annual salary -- that works for both sides. It's time for Mitch Kupchak, Jim Buss and Kobe Bryant to begin talking shop. Whether it's by finalizing their plan going into summer or working out an extension, it's time to start plotting out their future together.

The first step to stabilizing the Lakers isn't by adding free agents in 2014. It isn't by drafting a highly-touted player with a 2014 first-round draft pick. It isn't by trading players for assets. It's by leaning on the man who has been the Lakers' pillar to lean on both on and off the court.