The Lakers could be interested in a former Los Angeles regular to round out their frontcourt rotation.

Share All sharing options for: Lakers rumors: Chris Kaman, Lakers have 'mutual interest', according to report

The Los Angeles Lakers have not made any moves since the NBA free agency period began and have watched their frontcourt depth disappear in the meantime. The Lakers are now eyeing free agent big man Chris Kaman, and the sides are said to have "mutual interest", according to Yahoo! Sports Adrian Wojnarowski.

Extending Kobe is the next step 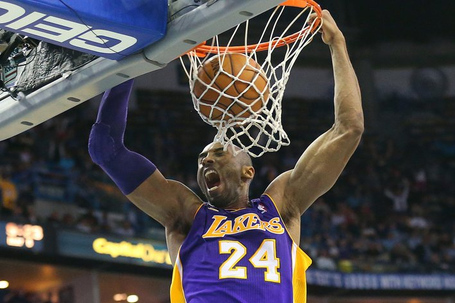 The next step for the Lakers is to work out an extension with Kobe Bryant.

The Lakers are in need of depth at both power forward and center. They are expected to slide Pau Gasol back up to center, but have only Jordan Hill as a returning big man. Rookie Ryan Kelly could also be a factor in Mike D'Antoni's rotation as a stretch big man, though the safe bet would be to add depth ahead of him in case pick No. 48 doesn't pan out.

Kaman averaged 10.5 points and 5.6 rebounds per game with the Dallas Mavericks last season. He averaged a career-low 20.7 minutes per game in his lone season in Dallas.