Is Jordan Farmar a perfect fit in Mike D'Antoni's point guard dependent system? There's plenty of reason to believe he'll be great for the purple and gold.

Share All sharing options for: Jordan Farmar might be the best point guard for this Lakers team

Jordan Farmar is returning to the Los Angeles Lakers after an overseas stint in Turkey and is walking into a perfect situation, as detailed by our very own C.A. Clark. The Lakers have two-time Most Valuable Player Steve Nash on board for another two years and Steve Blake is also tugging along, but Farmar will have an opportunity to be more than a one-year minimum contract to fill out the roster. Farmar, 26, is in his prime and is about to be plugged into Mike D'Antoni's system, which he called a "dream" system for a point guard.

This is an ideal situation for the returning Laker, but an even more opportunistic signing for Los Angeles. Farmar is the best suited point guard on the roster to lead D'Antoni's offense, and he'll prove it this season.

Getting to the rim

Make no mistake, while D'Antoni used Horns sets to adjust to the personnel he had at his disposal, his bread-and-butter remains pick-and-roll basketball. The issue for Los Angeles last season was the lack of ballhandlers who could get to the rim.

Kobe Bryant was the only player who consistently used high-screens effectively, forcing him to be the team's primary scorer and facilitator. The Lakers lacked a secondary ballhandler who could take the pressure from Bryant to be the lone high-screen threat.

How did Steve Blake fare as a ballhandler last season? Only 9.3 percent of his field goals came at the rim. 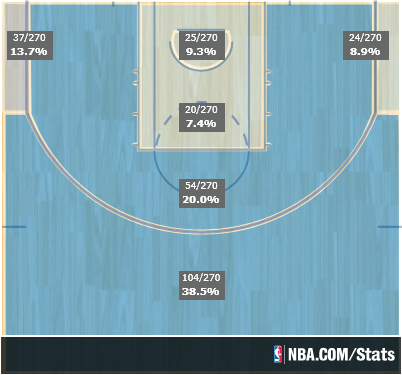 Steve Nash was more successful at getting to the rim, finishing the season with 17.7 percent of his field goal attempts coming at the hoop. 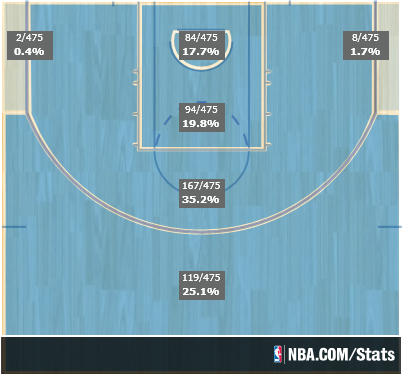 In comparison, during Nash's last Most Valuable Player season in 2006 he finished at the rim 24.4 percent of the time. 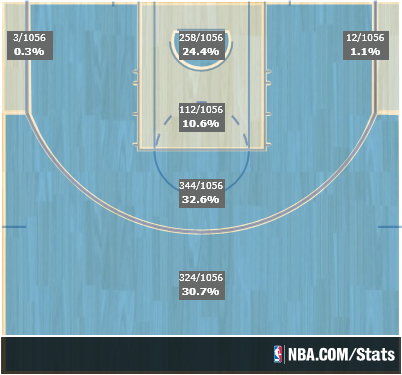 To wrap up the first point, here's Jordan Farmar's shot distribution chart from his last season in the NBA. A phenomenal 29.2 percent of his field goals came at the rim. 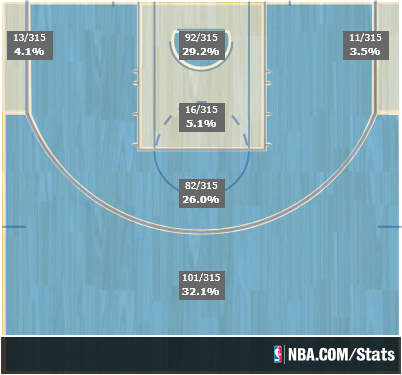 High-screens, threes and Horns oh my

The percentages above show the end result, but the film shows the how, which is incredibly important when considering Jordan Farmar's fit in Mike D'Antoni's system.

As a pick-and-roll ballhandler, Farmar will have the chance to use the endless high-screens that define D'Antoni's approach to offense.

Here, Farmar uses two screens before driving to the rim for the finish:

He is able to penetrate the paint with ease. Last season both Nash and Blake struggled to get to the rim off the dribble, something that Farmar should have no issue doing.

Here's another example of Farmar using a high-screen to blow by his primary defender, then using his athleticism and ballhandling ability to penetrate the lane and finish between two defenders:

Farmar will also have to be a reliable floor spacer from deep, whether it's coming off of a high-screen or spotting up. Here, he uses a high-screen at the top of the arc to create space for a three-pointer.

Farmar dribbles around Greg Stiemsma's hedge and drills the three.

A fold in the Lakers' offensive system that is not expected to go away are Horns sets. D'Antoni told Silver Screen and Roll when interviewed during Summer League that they will continue running the same sets they did last season, which included the versatile set. Horns is not an unknown to Farmar, who also ran the sets with the Nets.

Here, the Nets use Horns to set Farmar up for an easy layup

With Steve Nash and Kobe Bryant, he won't have the ball in his hands often. That is not an unknown to Farmar, who played in the Triangle when he was initially drafted by the Lakers, and eventually played with Deron Williams in his final run with the New Jersey Nets.

Here, Farmar spots up in the corner while Williams handles point guard duties. Derrick Rose closes out on Williams, who then drives to the paint to force the defense to collapse. This is a common occurrence when either Nash or Bryant are handling the ball, and is a scenario Farmar will often find himself in.

After pulling the defense into the key, Williams kicks out to Farmar who hits the open three.

Farmar shot 41.9 percent as a spot-up shooter from deep during the 2011-2012 season. He also shot 44 percent overall from three-point range.

On the topic of spot-up shooting, Farmar ranked fifth-overall when catching and shooting after coming off of screens in 2011-2012, averaging 1.12 points per possession. He shot 45.8 percent overall and 45.5 percent from deep in this category.

Farmar is alone as he cuts back to the three-point line. Williams passes it to Farmar, who nails the shot from beyond the arc.

All of the above is enough reason to make a case that Farmar is an incredible signing by the Lakers for the minimum, but that's without considering where he can really shine for Los Angeles -- in transition. In his final year in the NBA Farmar ranked 25th overall in points per possession in transition (1.35).

Bryant, Blake and Nash can't be expected to push the pace in transition. With new additions like Wesley Johnson and Nick Young to add the youth and athleticism the Lakers have lacked in recent years, Farmar is a great complementary addition to what will likely be an uptempo group.

Farmar checks off every box that D'Antoni looks for in a point guard. He's quick, he's aggressive with the ball, he can stretch the floor and he can play in a fast paced offense. Even if he is the best fit in his system, he is best served as a sixth man for the Lakers who can help reduce 40-year-old Nash's minutes and also change the pace, however.

D'Antoni can get crafty with his lineups to create uptempo, small ball groups, as well as fit Farmar in as an off-ball player. Expect Farmar to flourish with this Lakers squad, who desperately needed a ballhandler like him last season to take the pressure off of Bryant and a hobbled Nash to create offense every possession.