Metta excited to play for Knicks, embracing challenge of a title

Metta World Peace is going back home to New York and is focused on working towards winning a title in The Big Apple.

Share All sharing options for: Metta excited to play for Knicks, embracing challenge of a title

LAS VEGAS -- Metta World Peace stood with his back against the wall while microphones crowded his face. He shot out to Las Vegas, met with New York Knicks officials and found himself a two-year, $3.2 million deal to return home.

"Prime aint nothing but a word. Heart, that's what it really is." -Metta World Peace

World Peace, known as one of the most eccentric figures in the basketball world, seemed anything but as he spoke to reporters Monday evening. He was clear, concise and articulate. He methodically selected his words like a boxer breaking his opponent down one movement at a time.

World Peace will turn 34 during the 2013-2014 NBA season while a cache of draft picks played a game of basketball in front of him. The 2004 NBA Defensive Player of the Year isn't the dominant perimeter stopper he was while wearing an Indiana Pacers uniform. Still, his lightning-quick hands and strength make him a daunting defender. "Prime aint nothing but a word. Heart, that's what it really is."

Leading up to his amnesty World Peace was busy on Twitter filing the internet up with his calculated non-sense 140 characters at a time. Talks of burgers without buns and amnestying his jeans because they're "too tight" are just a small sample of his ramblings building up to the Lakers cutting ties. After it became official, he began talking about retirement, playing basketball in China for Yao Ming's Shanghai Sharks and was even considering arena football. All wild, senseless ideas that weren't surprising coming from the man who once got a ticket for driving his "race car" through public streets in Los Angeles.

Lakers are pretending to contend 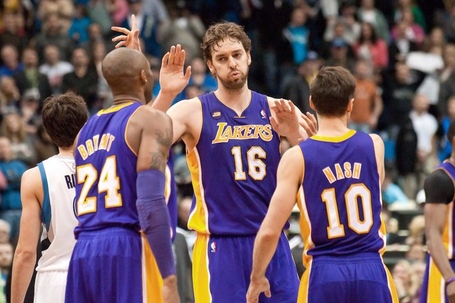 As the organization picks up the pieces in the wake of an All-Star center's departure, the fan base debate rages on whether to keep on fighting with the team at hand, or to completely rebuild. It seems for the moment, the Lakers are doing both.

What was surprising, however, was how genuine he made the madness feel as he discussed why he considered playing in another country or a different sport altogether.

"I like to be adventurous, I have no filter. I have no filter in my creativity. If I want to be creative I'll do it. Very bold. Changed my name. Arena football was really appealing to me. It was something that would have been interesting to everybody. I'm pushing kids to play multiple sports, like Bo Jackson did back in the days. So playing arena football -- who knows if I would have been good or not, but it was a way to inspire. Something that's always on my mind," World Peace explained.

"My second option was China. That's different. Too many times people in New York City I grew up playing basketball with only focused on the NBA. They forget about other things, education and the world. I felt China would have been very inspirational."

"I was really ready to go to China and play for Yao [Ming]. I love Yao. I like to do things I want to do," he added while discussing his desire to play overseas for his former teammate.

In the end, playing for the Knicks was what World Peace wanted to do, and at $3.2 million for two years, he'll be doing just that. He can slide into the Knicks lineup as a starter while New York plays small with Carmelo Anthony filling as as their power forward. He can come in off the bench and be a veteran presence and defensive specialist. No matter what, he will lessen the pressure on Anthony to constantly defend the elite forwards in the league. It's unclear how the Knicks will use his talents.

That doesn't matter to World Peace, though. What matters to him is embracing the challenge of bringing a title to New York. The "mecca of basketball" has been without an NBA championship since 1973, and he joins a group that was eliminated in the Eastern Conference semifinals by the Indiana Pacers. The Eastern Conference has gotten stronger while the Miami Heat have won back-to-back titles, making it a hard road to travel.

World Peace promised Kobe Bryant he'd help him win a championship with the Los Angeles Lakers and delivered in 2010. As he ends the always-entertaining chapter of his life that took place in Southern California, he's prepared to play out the end of his basketball journey in New York.

"I want to do things that are hard and make it look easy. That's what I want to do."