Andrew Bynum has agreed to join the Cavaliers. While he didn't play a game last season, Cleveland made a smart gamble on an elite low-post player.

The last Los Angeles Lakers center to be a champion has found a new home -- Andrew Bynum is joining the Cleveland Cavaliers. Bynum will make his return to the court after sitting out last year because of chronic knee issues

So Cleveland hopes. Ponying up $6 million guaranteed on Bynum is a gamble, but a safe one for the Cavaliers.

Andrew Bynum isn't a Laker. He hasn't been a Laker for a year, in fact. The Big Braced One will forever be linked to the purple and gold, though. For his tremendous talent on the court that blossomed before wilting last year. For not giving any damns off the court and surviving life beside an ornery Kobe Bryant who wanted him sent up the river for Jason Kidd.

The same player who gutted out a partially-torn meniscus is his knee to serve as the Lakers center in a grueling seven-game series against the Boston Celtics couldn't play a single game of basketball last season. Those knees have red flags tattooed onto them at this point.

He joins a young nucleus with Kyrie Irving, Tristan Thompson, Dion Waiters, Tyler Zeller and 2013 NBA Draft No. 1 pick Anthony Bennett, with the services of Anderson Varejao behind him. Whether or not he ever becomes the player he has shown flashes of throughout his career in week-long streaks is anybody's guess. The 18.7 points on 56 percent shooting with 11.8 rebounds per game he averaged in his career-year with the Lakers in 2011-2012 is a distant memory, but teams still lobbied for his services. This is a guy who had a true-shooting percentage of .594 and a defensive rebounding percentage of 26.1.

The potential was there for the taking, as it always has been with Bynum. Cleveland latched on. 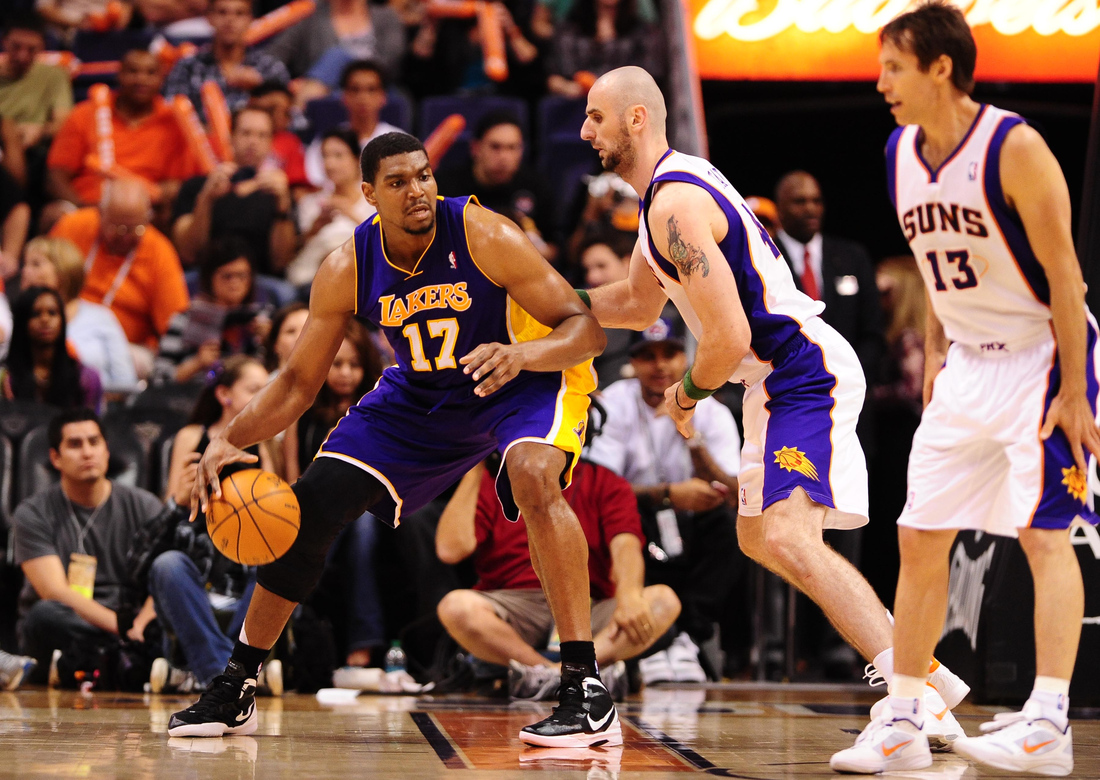 With the choice of the Dallas Mavericks, Atlanta Hawks or Cavaliers in front of him he joined the home of mulitple No. 1 draft picks over the last ten years.

The Cavaliers guaranteed $6 million of Bynum's salary to him on a one-year, $12 million contract. Cleveland has a team option on the second year at $12.5 million. While it's a gamble for Cleveland, it won't be detrimental to the team if Bynum ends his time with an organization outside of Los Angeles with disappointment again.

If it doesn't work out only $6 million guaranteed makes it an easy choice for Dan Gilbert to walk away from. If it works out? $12 million for Andrew Bynum without having to trade assets away for him is highway robbery. For reference sake, Bynum made $16.8 million with Philadelphia doing absolutely nothing but posing for photos of his hair.

Fear the Sword has already taken to learning why Bynum's game is there to be loved and embraced. Capturing a motivated Bynum is the tricky part, and making it a lasting thing is even harder. Let's not forget that Mike Brown is the Cavalier's coach and things weren't particularly peachy between the two in Los Angeles.

There's the infamy of how he avoided the huddles and the "getting my Zen on" quote, the hoisted three-point field goal and benching against the Golden State Warriors, and a host of other soundbytes and reports showing a clear measure of disconnect between the two.

Numbers speak loud to Bynum succeeding under Brown, though. He put up career-high stats in their lone year together. Bynum had one of his healthiest seasons, playing in 60-of-66 regular season games and all 12 games during the playoffs.

Suffice to say there's no telling whether Bynum will average 20 points or play less than 20 games at this point, but there will be intrigue about how he plays when and if he makes his postponed debut out of a Lakers uniform.

Dan Gilbert and the Cavaliers are willing to place a $6 million bet that Bynum will be more productive than destructive, but with their roster set to progress with or without Drew down-low, it makes plenty of sense. Low-risk, high-reward on an elite player at the right price. Sometimes you have to roll the dice to make a splash.

The same dice roll the Philadelphia 76ers made when they sent away Andre Iguodala and wound up with nothing in the end. Sometimes, the timing just isn't right on landing franchise-altering big men. It's understandable.