The Lakers have placed their interest in the big man.

The Los Angeles Lakers expressed their interest to multiple free agents when free agency began at midnight, and the latest name to add to the list is big man Byron Mullens, according to Dave McMenamin of ESPN. Mullens had a career-high in points per game, but shot just 38 percent from the field.

Mullens took a career-high 3.9 three-point field goals per game (career average 0.8) and shot only 31 percent from beyond the arc. To further exemplify that Mullens shouldn't be considered a floor-spacing option for the Lakers, here's his shot chart from the 2012-2013 season: 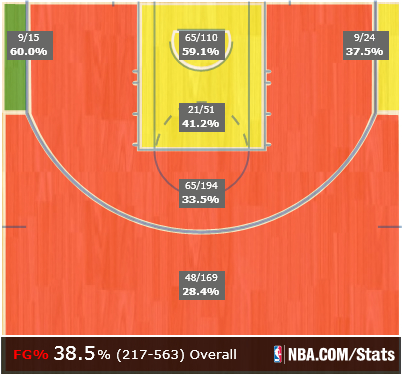 The Lakers free agent trail indicated they will be in the market for a floor spacing option on the wings, but it appears they'll also do their due diligence in exploring their frontcourt options.

Mullens could be as glass cleaner behind Jordan Hill in the rotation, however, as he averaged 6.4 rebounds per game and a 22.4 percent defensive rebounding percentage.