With the 2013 NBA Finals set to tip-off Thursday night, what better time to reflect on Kobe Bryant's brilliant Game 1 performance against the Magic in 2009?

Share All sharing options for: Kobe's brilliant Game 1 performance in the 2009 NBA Finals

The year is 2009 and it has been a grueling playoff run for the Los Angeles Lakers. The Lakers dispatched the Utah Jazz in five games, the Houston Rockets in a tough seven-game series and put Carmelo Anthony and the Denver Nuggets to sleep in a memorable six-game series. Now, they prepare to face the Orlando Magic, led by Defensive Player of the Year Dwight Howard and a host of three-point shooters.

Kobe logged 40 points, eight assists, and eight rebounds in Game 1 of the 2009 NBA Finals. In the third quarter he scored 18 points on 6-of-11 shooting, outscoring the Magic's 15 points in the quarter on his own. His standout near-triple-double performance set the tone for what would be a five-game series and title for the city of L.A.

Let's reminisce and enjoy a classic Game 1 performance as one of the game's greats eviscerates the top-ranked defense of the 2008-2009 NBA season.

Here, Andrew Bynum sets a screen on Mikael Pietrus, who runs straight into Bynum. Howard is sagging over the top to prevent dribble penetration, but Bryant quickly pulls up for the jumper and takes advantage of the amount of space given to him. 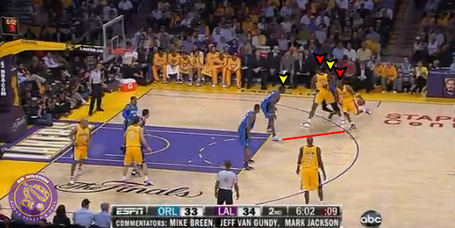 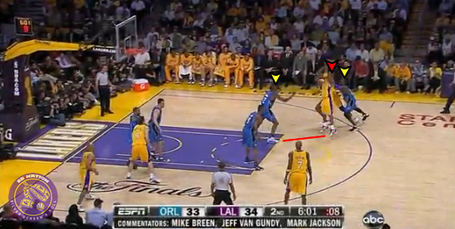 Game 1 featured Bryant making not only the easy shots Orlando was giving up, but tough shots over the outstretched arms of Howard, Marcin Gortat and Pietrus.

Here, Pietrus is better prepared for the high-screen and shifts his body to funnel Bryant into Howard. 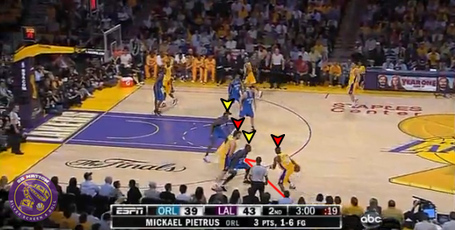 It doesn't mattter, though, as Bryant navigates to the elbow and sinks the shot despite being crowded by both Pietrus and Howard. 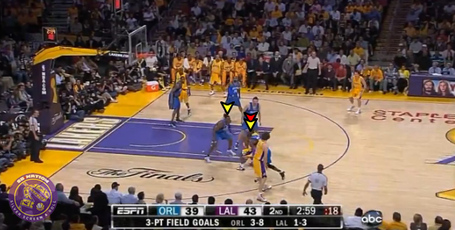 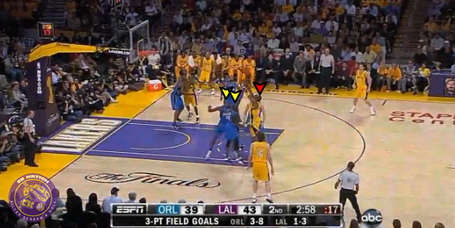 Howard was forced to push his pick-and-roll coverage up to challenge Bryant instead of giving him space to work with.

Pau Gasol sets the screen here, creating space between Bryant and Pietrus. Howard picks up Bryant and shifts with him as he drives to the elbow. Bryant forces Howard to sink into the paint to open his stance in order to prevent his dribble penetration, creating another mid-range opportunity. 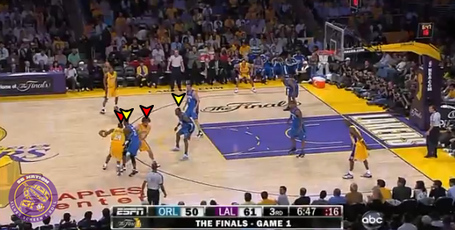 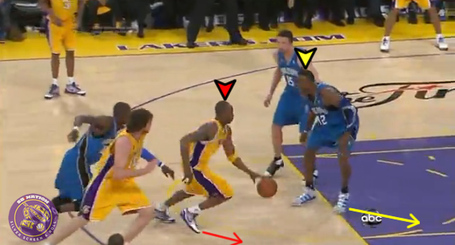 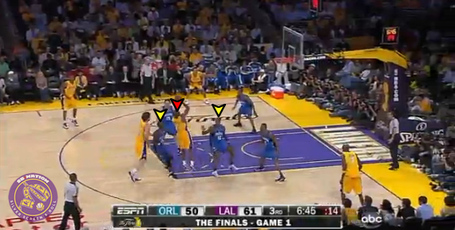 It wasn't just Kobe sticking jumpers out of high-screens, however, as his superb footwork was on display through Game 1 as well.

Here, Bryant has the smaller Courtney Lee isolated in the post. He quickly pivots around Lee, then steps through towards the rim and squeezes between Howard and Lee. 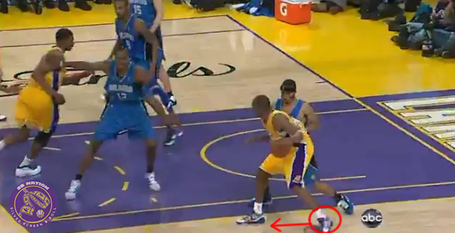 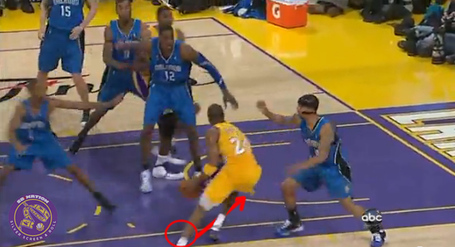 Even with Howard challenging the shot Bryant is able to finish at the rim. 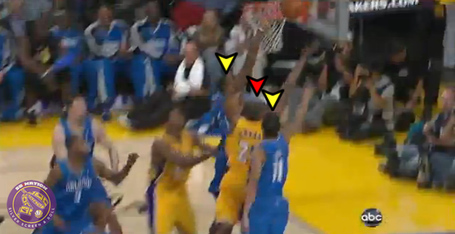 Pietrus had the unfortunate task of hounding Bryant through the night, and series. When Bryant wasn't running Pietrus into screens, he was using his footwork and ability to make difficult shots to score over the top of him.

Here, Bryant catches Pietrus with a pump-fake, pivots to back Pietrus down, shakes back around, then fades away. Typical Kobe Bryant things. 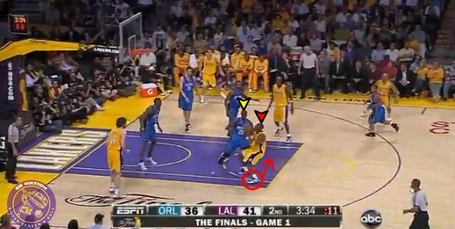 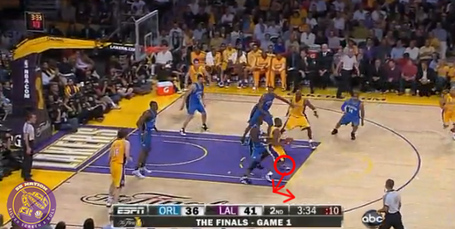 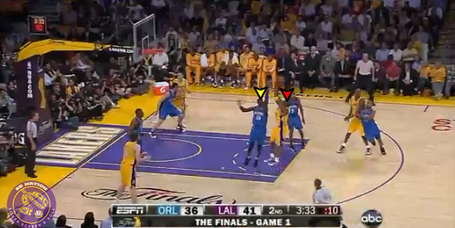 In closing, Kobe Bryant was phenomenal in Game 1 of the 2009 NBA Finals. He played like a man sick and tired of having "only" three titles, who still had the disgusting taste of defeat from 2008 lingering, and wasn't going to let another one slip away. The best player on the planet was a force to be reckoned with and ultimately captured his fourth title while averaging 32.4 points, 7.4 assists, and 5.6 rebounds per game through the series.

One more for the road, featuring Kobe Bryant shaking Mikael Pietrus off the dribble, then finishing the play in amazing fashion at the rim. Mama there goes that man.

Here are the keys to the DeLorean, feel free to get back to the present in time for Game 1. I'll be staying here a little while longer.