A in-depth look at how newest Laker Ryan Kelly can fit into the Lakers offensive schemes under Mike D'Antoni.

Share All sharing options for: Breakdown: Ryan Kelly in the Lakers offense

Ryan Kelly is the newest member of the Los Angeles Lakers after drafted with the No. 48 pick in the 2013 NBA Draft. Ben Rosales has weighed in and considers him a great fit in Mike D'Antoni's offense, and the early NBA Draft grades indicate Mitch Kupchak and company did a great job of making the most out of being so deep in the draft.

His utility as a stretch-four is exactly what D'Antoni expects out of at least one of his bigs, and Kelly shot 42 percent overall from beyond the arc in his senior year with the Blue Devils. While there are no guarantees his game will translate to the next level, there's reason to be optimistic that he can contribute to the Lakers almost immediately on offense. Drafting Kelly has given coach D'Antoni a rotation player he can work into the Lakers' frontcourt.

When the Lakers were most effective they used dribble penetration to create in their offense. Kobe Bryant was fantastic at driving to the basket, pulling the defense in and finding the open man.

Here, the defense collapses to stop the dribble penetration. The ball handler kicks it out to Kelly on the perimeter, who doesn't hesitate to put up and drain the shot. One of the positives of drafting a player out of a program like Duke is that he clearly knows his role after playing under Coach K for multiple years. The Lakers have a clear idea of what he's comfortable doing. Scoring from beyond the arc off of the drive-and-kick game is critical for floor spacing, and that's one of the boxes Kelly checks off. 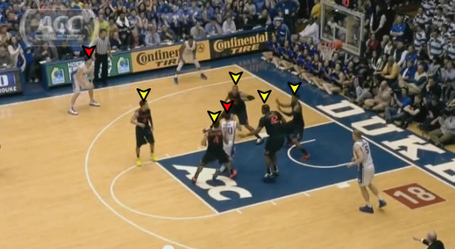 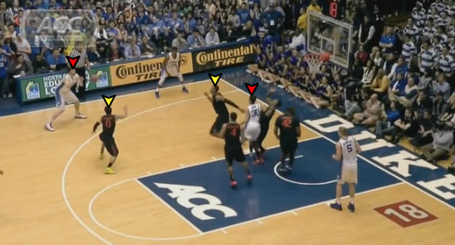 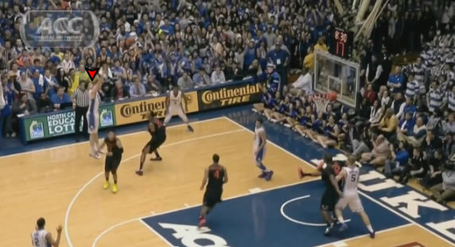 The other aspect to the floor spacing he provides is for his partner in the frontcourt. The Lakers are hoping that he's spacing the floor for Dwight Howard, but even if he isn't, Pau Gasol can also make use of the space and is a phenomenal passer.

The defense sags off of Kelly to help at the rim in this play. The ball is kicked out and he hits the open jumper. 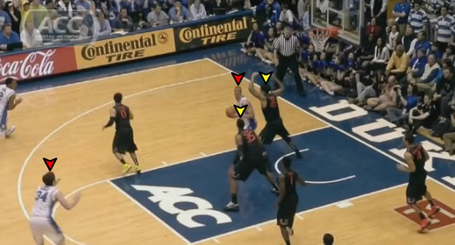 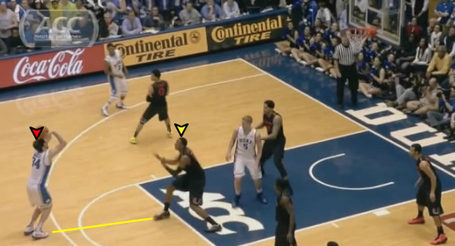 Kelly is also a valuable three-point threat in transition. 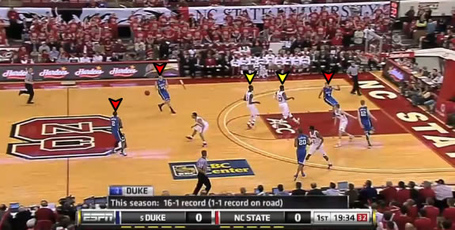 We've mentioned his ball handling ability in our evaluation of his game so here's an example of Kelly using it to his advantage. After being chased off the corner three he puts the ball on the floor and nails the pull up jumper:

He can also get to the rim when he has the ball in his hands:

It's clear Kelly's skill-set lends itself to the Lakers' offensive principles after watching film. Let's take a look as to how and why, now.

Jamison is unlikely to return after being a key player in D'Antoni's rotations, but Kelly has the potential to be a better player at stretching the floor than he was.

Here, Jamison set's a high-screen for Bryant and pops out to the perimeter. 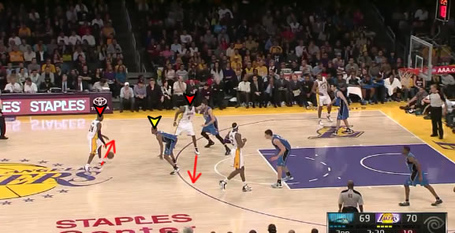 Because Bryant is a threat with the ball in his hands defense often tried to trap or hedge on him. This gives him an opportunity to pass to the screener on the perimeter. Bryant finds Jamison who hits from deep. Kelly's 6'11 frame is a great pillar for the Lakers' ball handlers, and his shooting from beyond the arc will make him a great target if defenses aggressively disrupt the Lakers ball handler out of the pick-and-roll -- something we saw often last season.

As mentioned above, the spacing Kelly can provide the Lakers offense can be a key for the Lakers' post players. Here, Bryant passes to Howard in the low-post. 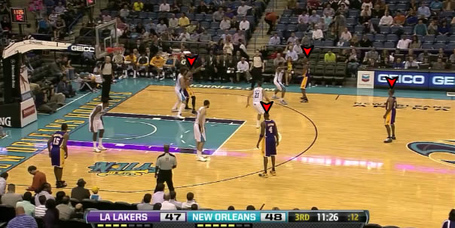 As Howard backs down Robin Lopez the New Orleans Hornets react by sending an extra defender (Greivis Vasquez) to Howard. Howard is comfortable passing out of doubles and he finds Chris Duhon at the top of the arc.

With Vasquez committed to helping on Howard, Ryan Anderson is forced to rotated onto Duhon. Duhon immediately swings the ball to Jamison and he sinks the three-point field goal. This is the importance of having a player who can shoot from beyond the arc on the floor when Howard is the lone post player. Kelly won't always have to work out of screens, but just has to stand on the perimeter and be prepared to catch and shoot. The spacing is created from the inside-out game.

The Lakers' offense relies on producing out of the high-screen, whether it's to the roll man or to an open release man. Here, Howard rolls to the rim and pulls the defense into the paint. Gasol is the trailer man.

As Nash drives off of the space created from Howard's screen Gasol is left alone on the perimeter as his man has rotated to cover Howard. Nash finds Gasol for an easy jumper.

Expect a return of Horns next season, which was one of the Lakers' best sets when they ran it. Kelly is a great fit in Horns as well. Steve Blake takes a screen from Howard, who slips to the rim.

LaMarcus Aldridge rotates to stop Howard. This leaves Gasol with a wide-open jumper, which he sinks.

The Lakers had no issues creating space for their offense, but they did struggle with hitting a high-percentage of the quality looks they had. If Kelly can continue to hone in on his sharpshooting as a Laker he will fit perfectly into D'Antoni's schemes while providing space for the Lakers post players.

There's unabashed optimism about the No. 48 pick from the good Ben Rosales, myself and most experts who graded the pick for the Lakers. Does that guarantee he will pan out? Of course not. But the path to his success in D'Antoni's system is there, and he will likely have an opportunity to carve a role with the purple and gold.

Now if only Robert Sacre and Mark Madsen teach this guy a thing or two about celebrations.