Mitch Kupchak, a University of North Carolina alum, drafted a player out of Duke. Ryan Kelly must have been a great fit for Kupchak to take that dive, and every sign points in that direction.

The Los Angeles Lakers had one draft pick in the 2013 NBA Draft, No. 48, and selected Ryan Kelly out of Duke. The 6'11 power forward is a stretch-four that has shown the ability to put the ball on the floor and is an aware passer., and as 2013 NBA Draft grades surface, he's gotten the Lakers (mostly) high marks.

Kelly is a perfect fit 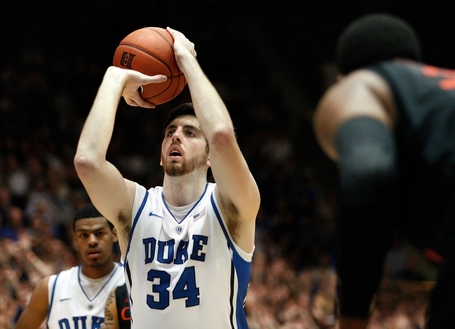 By picking Ryan Kelly, the Lakers filled a spot in the rotation by getting a sweet shooting big man who can space the floor.

I'm not sure I'm in love with Ryan Kelly as a prospect in general. But Ryan Kelly on a Mike D'Antoni team? I can get excited about that. Kelly's ability to shoot the rock, handle the ball and play point power forward at times should make him a perfect fit in Mike D'Antoni's system. I'm not predicting Kelly will be a star, but his chances for success go up dramatically under D'Antoni's watch.

Does he help them re-sign Dwight Howard? Then this doesn't matter.

Give credit where credit is due: The Lakers found a second-rounder who might be able to contribute next year. The Lakers haven't done much in the draft over the past 15 years aside from 2005's Andrew Bynum pick. Kelly isn't going to start or form the basis of the team's future, but he could end up being similar to Ryan Anderson, who expertly played off Dwight Howard with the Orlando Magic. There were better players on the board, but Kelly was a good fit.

Considering all the drama last year about running a spread floor system that emphasizes spacing, Kelly is quite the leap in that direction. He checks off essentially every category that D'Antoni asks from his big men and there's practically no scenario in which Kelly couldn't be useful in some fashion to D'Antoni on the offensive end. We talked about D'Antoni having a limited opportunity to get players that were more attuned to his system and principles in the off-season and Kelly is a pretty clear example of this.

The resounding theme across the opinions above is that Kelly is a great fit in Mike D'Antoni's system. With the likely exit of Antawn Jamison, and Earl Clark's free agency the Lakers made a solid choice to add another big to the roster. In particular, one who can stretch the floor, which is an emphasis for D'Antoni.

D'Antoni has been hesitant to play Jordan Hill as a power forward because of his inconsistent ability to stretch the floor, leaving Pau Gasol as the only player with power forward size and skill on the roster. With pick No. 48 it's difficult to find a player who can contribute while fitting the team's scheme, but Kelly seems to be in that sweet-spot.

It's unlikely that the Lakers will find a star in Kelly, but he has the skill-set and pedigree as a senior out of Duke to contribute on a team that has room to utilize him. A solid rotation player from the 48th slot in the draft is about all you can ask for.

With such a deep draft pick and every player mocked to them taken earlier than expected and all of the discussion above, my final grade for this draft pick?