Dwight Howard unlikely to re-sign with Lakers, according to report

Share All sharing options for: Dwight Howard unlikely to re-sign with Lakers, according to report

Los Angeles Lakers free agent center Dwight Howard isn't likely to re-sign with Los Angeles after the July 10th moratorium period ends, ESPN's Chris Broussard reports. The main reasons? He doesn't want to play in Mike D'Antoni's system, he did not enjoy playing with Kobe Bryant (though he wouldn't mind doing it in a different system), and he doesn't want to be "second fiddle". From Broussard's article:

Howard's major problem with the Lakers is the system that coach Mike D'Antoni employs. Beyond that, he did not enjoy playing with Kobe Bryant, though he could manage to do so in a different system, a source said. Howard also does not want to be second fiddle to Bryant for several more seasons.

Dwight will take meetings with the Dallas Mavericks, Atlanta Hawks and Houston Rockets, each of which will have the requisite cap space to sign Howard straight away from the Lakers (Houston is working to trade last year's fifth overall pick Thomas Robinson in order to clear enough room). The 16-time champions will then get their chance to pitch Dwight, though their recruiting campaign has already begun with numerous billboards around town. Howard signing with another team without a sign-and-trade agreement on the part of the Lakers could be disastrous, as LA would be left with no compensation and a capped out, aging roster heading into next year.

Dwight and D'Antoni are a match made in heaven 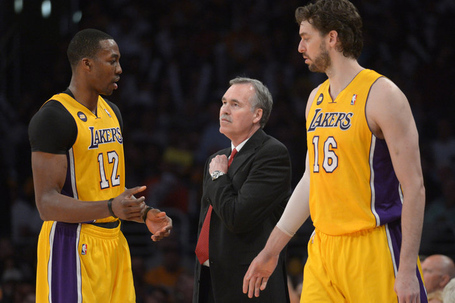 The prevailing thinking is that Dwight Howard might leave the Los Angeles Lakers because, among other things, he does not like Mike D'Antoni as his head coach. That would be a terrible reason, because Dwight's game and D'Antoni's system are a perfect match.

It seems odd that Howard would base so much of his decision making on a) a coach whose tenure in LA is shaky at best, b) a management team that seems to have no problem firing coaches on short notice and c) a 35 year-old player rehabbing from a major injury who only wants to play one or two more seasons. Still, his opinions aren't unfounded--though it was difficult for Mike D'Antoni to build an offense around such a poor free throw shooter in Dwight, it was obvious that the offensive focus was on Bryant, Nash and Gasol last season, especially in crunch time. Moreover, playing with such a ball dominant guard like Kobe is always difficult for a big man, especially one who has never been anything besides the first option in an offense.

Regardless of how strongly Broussard is reporting Howard feels about leaving LA (and the extra contract year and $30 million they can offer him), D12 is infamously indecisive regarding his future. Until ink is applied to paper, there's truly no telling what change of heart he'll have, or where he'll be suiting up next year. Take this news with a grain of salt, and fortify yourself for 10,000 more articles just like this one, with Dwight leaning in a different direction every time.

It's going to be a long summer.