World Peace staying with Lakers, will accept $7.7 million option, according to report

Metta World Peace will accept his player option to say in Los Angeles. He also made a "big announcement" this morning regarding his latest endeavor.

Share All sharing options for: World Peace staying with Lakers, will accept $7.7 million option, according to report

Metta World Peace will accept his $7.7 million player option with the Los Angeles Lakers and return for the 2013-2014 season, according to Sam Amick of USA TODAY Sports. Mark Medina of the L.A. Daily News also reports that World Peace will return to the Lakers.

Most likely Laker to be amnestied 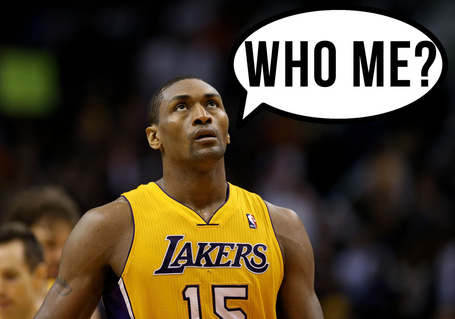 Four out of five writers here at Silver Screen and Roll selected World Peace as the most likely Laker to be amnestied this Summer if he accepts his player option.

In March it was reported that World Peace would consider opting out of the final year of his contract in order to restructure his contract to save the Lakers money while also extending his stay. There have been no reported discussions since.

In June Mark Medina reported that sources close to the situation believed World Peace would accept the $7.7 million player option and stay with the Lakers. June 25 is the deadline for players to accept a player option. World Peace waited until the last day as he evaluated the uncertainty surrounding the Lakers' future, according to Amick.

World Peace joined the Lakers in 2009. Last season he averaged 12.9 points on 40 percent shooting overall, five rebounds and 1.6 steals per game. He served as starting small forward but also moved up to power forward and center as the Lakers dealt with injuries throughout the season.

He also hinted that he had a "big announcement" to reveal on the 25th. In true Metta fashion, he announced that he will star in a reality series with former NFL player Terrell Owens.