All is not lost if Dwight Howard leaves Los Angeles this Summer. The 2014 NBA Draft could be the key for the Lakers future.

Share All sharing options for: Lakers' 2014 first-round draft pick can fix the franchise

"This franchise is a franchise that you really don't have to worry about too much, because no matter what happens, whether it's a year from now, two years from now, whatever the case may be, they're always going to find a way to have an impact on this league." - Kobe Bryant, June 4, 2013

The Los Angeles Lakers are three seasons removed from their last NBA championship. Further, they are three seasons removed from advancing beyond of the second round of the Western Conference playoffs. Now, they are about three weeks away from Dwight Howard becoming a free agent and potentially leaving the franchise with an uncertain future. What comes next is anybody's guess, but the most logical path is by making the most out of their 2014 first-round draft pick.

Franchise over everything, and if that means spending a season breaking things in order to maximize the potential of the future, then it's time to brace for impact. Move fast and break things, once famously said. The Lakers couldn't possibly move faster than hitting the lottery.

It might be uncomfortable, but if Howard leaves, the Lakers have to begin stripping down the roster in order to build up the future. A season of treading water at the middle of the pack is a wasted season and would be a reflection of failure from the front office.

Howard could complicate the future 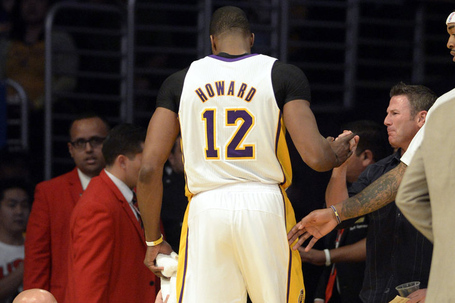 There are various different possible paths for the Los Angeles Lakers to re-build themselves into a championship contender once again. The easiest and most obvious path doesn't include Dwight Howard.

The Lakers' 2014 first-round draft pick can change the future of the franchise. Ben Rosales has talked about how stacked the 2014 draft class is. Most notable is Andrew Wiggins -- the biggest lottery prize since Kevin Durant or LeBron James. His potential and talent is so astonishing that NBA executives would deliver him a max contract right now.

Call me crazy, but I expect the Lakers will be in great shape by the time the 2016 NBA Draft comes around with all that cap space being handed out to the next collection of talent to carry the franchise forward. This places even more importance on the Lakers mining out a diamond with their one and only first-round draft pick in the near-future.

Having a top-5 pick to add to the draw of the Lakers lore, along with the oft-noted cap space would be a dream come true for Mitch Kupchak as he makes his pitch to potential free agents. Having that top-5 player on a rookie contract while still having the flexibility to add two-to-three max contract players would be the most Lakers thing ever.

It would become a fusion of the importance of a cheap contract under the new CBA's restrictions and penalties, combined with the financial muscle of big market L.A. The 2014 NBA draft is the Lakers' ace up their sleeve. The last card needed in their cap-space-created royal flush.

The NBA is an evolving environment and the Lakers have tried standing their ground while the winds of change have slammed into them. Young talent is at a premium in today's NBA. It's not just standout players like Kyrie Irving that are making a difference for franchises. Players like Kawhi Leonard, Klay Thompson, or Damian Lillard are also impacting teams in different ways.

Whether it's to implement them into an in-place structure for an added dimension, plug them into a developing core, or to have on contract as a piece in the foundation of a rebuild, the emphasis on young contributors has been heightened, and holding onto them has become a priority across the league. Rookie-scale contracts are critical for teams that are both rebuilding and reloading and stand as the only way to add above-average to elite talent on a budget for a handful of years. Or, as it's been glamorized, "the Oklahoma City Thunder model".

Really, it's strong business sense, proper front office management, and an emphasis on scouting. These are all aspects of NBA front offices that are evolving along with the game itself. Advanced analytics and financial management rule everything around the NBA, and the elite front offices know how to intertwine context and knowledge with that to succeed at the highest level. I'd like to think the Lakers front office is elite.

Could the Lakers trade a Vlade Divac for the 13th pick overall in today's NBA? Would a Kobe Bryant fall that far? Times have certainly changed, and Lady Luck has her own schedule and agenda.

If Howard goes it's time to look ahead to the future and not behind to the past. The 16 championships certainly capture the eyes and hearts of many a Lakers fan, but the Lakers are worried about numbers 17, 18, 19 and beyond. Living in the past glories keeps them in the past.

We've been spoiled as Lakers fans while chomping away at regular season wins, playoff success, and championship parades. There are paths to move on if Howard decides to do the same, but it may not be glamorous. Put in perspective, however, and one season paid to the basketball gods is a small sacrifice in comparison to what the Lakers may be able to attain.

This is the part where I profess my love for what Kobe Bryant has done for the franchise and basketball, and how would I hate to see the final year of his contract with the Lakers, and potentially career, end under such circumstances. He said it himself, however. No matter what the case may be, they're always going to find a way to have an impact on this league.

If he truly embraces that idea and makes what I expect will be a successful recovery from his Achilles injury, then perhaps there will be no mess to clean and he will be a part of the future. Franchise over everything and the Lakers', Kobe Bryant's, and the fans' conviction in those three words will be put to the test if Howard feels otherwise.