Kyle Korver is one of the leagues premier sharpshooters and should be targeted by the Lakers front office, but would the Lakers be willing to give him the contract he seeks?

(Welcome to the 2013 Lakers Summer free agency guide. Be sure to check out our full archive of player capsules, news, editorials, and more on the Lakers free agency period over here.)

The Los Angeles Lakers have a stupidly long list of things they need to take care of this Summer. There are two things that should be near the top of that list: three-point shooting and wing depth. Kyler Korver takes care of two of those needs with one signing, and is the kind of signing that could change the Lakers offense by having one of the leagues elite shooters. Korver was second overall on three-point percentage, and fourth overall in three-point field goals made.

Why the Lakers should look at Korver:

Korver adds an offensive talent to the roster but does not help the Lakers perimeter defense, another need at the wings. Still, Korver could be a sixth man type and gives vital depth to a position the Lakers lacked through 2012-2013. 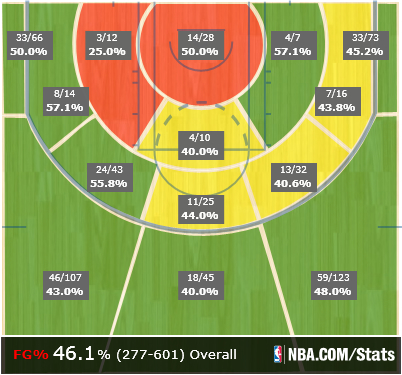 It's hard to see the Lakers landing Korver. At the age of 32 it'd be another aging player on a roster that needs to add youth. Of course, his expertise as an outside threat makes up for that. Last season he shot 45 percent from beyond the arc, which . Also, in an interview with Lang Greene of HOOPSWORLD, Korver expressed interest in signing a multi-year contract to "round out" his career:

Korver understands the business side of the league and isn’t worried about going through the free agency process. In fact, the veteran is looking forward to it. Korver will turn 32 on March 17 and is looking to secure a multi-year deal as he rounds out his playing career.

Are the Lakers going to dig into their future salary space for an aging Korver? There's no clear path for the Lakers to land Korver, and with his shooting expertise he should be able to land the kind of contract he's looking for. It just won't be with the Lakers.