Lakers must maintain their future cap space this Summer

The Lakers face a Summer full of tough decisions, but there is one clear cut approach they must take with their future. They must keep their cap space for the Summer of 2014 intact.

Share All sharing options for: Lakers must maintain their future cap space this Summer

The 2012-2013 Los Angeles Lakers have plenty of questions to consider as they move forward from the carnage was left in their path. Battered and broken bodies, extreme expectations buried in the ground, and the overarching question of whether it's worth it to try it all over again.

What went wrong: The Bigs 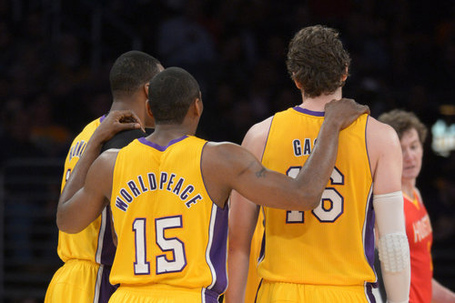 In part two of our "what went wrong" series we look at the big men.

Above all else, though, the Lakers can't rush into any decisions. The front office is walking a high-wire and a large crowd has amassed under them. On the other end of the wire is freedom in the form of cap space, and the wire they're walking on is the pressure to patch the roster to see how far out into the ocean they can sail before another leak springs. Mitch Kupchak and Jim Buss have a rare opportunity to press the reset button their salary situation and roster in one season, and have to resist the temptation to alter their plans.

Once the 2013-2014 season ends the Lakers are currently looking at only the $9.7 million expiring contract of Steve Nash. Whether or not Dwight Howard returns, L.A. is in position to finally create a team that isn't akin to digging through a bargain bin of DVD's at Wal-Mart to find your favorite awful movies. The Lakers' window with this core was only a two-year span, concluding with the expiration of Pau Gasol and Kobe Bryant's contracts. That has to remain the plan if they want to be a player in the free agent market.

Let's look at a brief history of the free agent signings the Lakers have made to patch up the roster over the last three seasons:

The Lakers have had limited resources to add pieces to their roster and have had to settle on their lineup since the arrival of Gasol and emergence of Andrew Bynum. Finally, after years of being stuck with a bench and lineup that has been spread so thin on talent, age, and abilities, they will have the opportunity to clean the slate and build a new team.

Remember when the Lakers were "shopping" all of their bench players for cap space and second round draft picks at the trade deadline and they couldn't even fetch that price? They need better players on the payroll than that.

The obstacle for the Lakers will be finding a talented enough group of players during free agency who will accept one-year contracts. How many young, quality players will want to be rentals for a team that is preparing for a complete overhaul the following season? While the Lakers underperformed in their last go-round with this core, the expectation of improvement will still be high from fans of the organization.

The Lakers can't fall into short-term decision making and need to take the long-view with the future of the franchise. Arguably the most important asset they have on their roster to send out in a trade is Gasol, but as a $19 million expiring what will he fetch after a season where he played only 49 games? There may be calls on Gasol, but teams will be looking for cap relief if they take on his large expiring contract. The Lakers cannot provide long-term cap relief.

There is a list of needs for the roster. Athleticism continues to be a need after three seasons of beating that dead horse, perimeter defense is a must and has already emerged as a focus for the team as Mike D'Antoni wants to add a defensive assistant, they still need a three-point specialist to stretch the floor consistently, an injection of quality youth, and a player who can create his own shot outside of Bryant are all on the docket. That's a tall order for any front office to pull off in one Summer, let alone one with as little to get there with as the Lakers.

Nothing that promises next season will be any more successful for the Lakers. Bryant's recovery from a torn Achilles may make or break the season even if Howard decides to re-sign with L.A. in the Summer. Nash will give it another shot after making Derek Fisher look like a man who found the fountain of youth at point guard. Steve Blake has the worst luck in the NBA and can't stay on the floor through the various roll-of-the-dice injuries he has dealt with. World Peace had his most efficient season for L.A. but still isn't a reliable option on offense.

We don't know if next season is worth taking another shot at with the same players, but preserving the future is far more important than adding long-term salary sinks to try to win a couple more games and try to avoid another disappointing playoff run.

And, maybe in the Summer of 2014 they bring Bryant back. Maybe Gasol isn't traded and comes back on a discount for the Lakers. The Lakers don't necessarily need to walk away from it all to move on, but they need to keep their options open for an important turning point for the franchise.

Look no further than Howard's previous team, the Orlando Magic, to see an example of a team that never let the reset button hit. By the time they were starting to move in a different direction, they had to move their superstar player make up for their mistakes. The attempts to quick-fix their roster fell short and were never lateral additions. They floated where they were, desperately trying to tread water instead of creating a path for the future. Sometimes, there aren't enough bandages to patch every hole up.

Sometimes, the ship has to sink so a vision for a new one can come to life.

Other times, the other boats are just too damn fast to keep up with. The Lakers will be facing both issues this Summer, and barring another home run from the bat of Magic Mitch, there's no clear path to improving the present without hurting the future. While watching the Lakers succeed is far greater than watching them struggle through every step of a season, that may be the trade-off the front office makes in order to keep a new future alive.

There will always be pressure from the fan base to turn water into wine. The Lakers are a winning franchise, and three seasons of early playoff exits have created doubts. Can the Lakers organization make big decisions without Jerry Buss? Is Jim Buss someone worth believing in? Is it the coach, the players, or everybody involved? The right decision for the Lakers this Summer is to play it slow and keep that 2014 salary cap intact. Even if it means minor changes and another uphill season.

The Lakers can't have it all, but they can have freedom from the cap space nightmare they've maneuvered through for the last five seasons. It takes patience, vision, and confidence. Something we could use a glimpse of.