Did Dwight Howard voice frustration regarding Mike D'Antoni during his exit interview? Not so fast, says Mitch Kupchak.

After a report surfaced that Dwight Howard voiced frustration regarding Los Angeles Lakers coach Mike D'Antoni, Kevin Ding of the Orange County Register spoke with Kupchak who said there was no discussion regarding D'Antoni during Howard's exit interview:

The unlikelihood of a Howard, Paul future 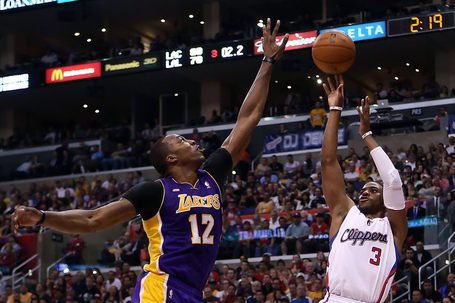 With theories of the next super-team abounding, just how difficult would it be to waive Kobe Bryant via the amnesty provision, trade Pau Gasol without taking salary back and convincing the two All-NBA stars to join the Lakers? As difficult as it sounds.

Kupchak said he didn't want any D'Antoni talk from Dwight anyway given Mitch's insistence that Lakers won't have any player dictate the coaching situation.

"To be honest with you, I wouldn't let it go there anyway," he said.

Howard and Kupchak spoke privately, same as some other Lakers did with the GM, after finishing their standard meeting with D'Antoni on April 30. But Kupchak said there was no talk with Howard about D'Antoni once he left the room -- and certainly no venting.

Kupchak's firm, public, stance that the Lakers will not allow a player to dictate their decisions regarding coaching is important. It's a "straight from the horses mouth" report that makes the front office's stance clear.
Or, it's just about the only thing Kupchak could say without undermining D'Antoni publicly. Clearly the Lakers would have preferred the "leak" of Howard's frustration never existing, even if false, and they had to shoot it down as cleanly and quickly as possible.
Either way, the events leading up to Howard's free agency, which doesn't begin until July 1, are on par with what was to be expected. Reports are surfacing and counter-reports are responding. This will only become murkier once Howard's contract expires and he can visit teams around the league.