Dwight Howard frustrated with Mike D'Antoni? Good for Dwight, he has every reason to let Mitch Kupchak and the Lakers know his stance.

Good for Dwight Howard. Dave McMenamin of ESPN has reported that Howard expressed "frustration" with Mike D'Antoni during his exit interview and all I can say is good for Dwight. 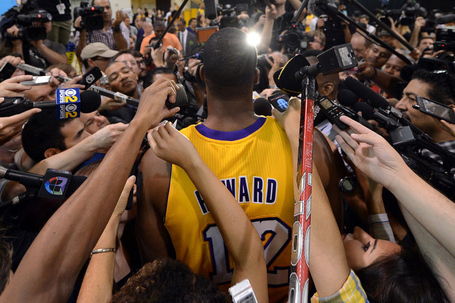 That's what an exit interview is for, right? To express what you think about the team's direction, what you would like to see changed, and the future. Howard is in line to be the leader of the Los Angeles Lakers -- should he accept that mission -- and the front office should, without pause, "pop" the question to him.

"Will you marry this coach for the next two seasons?"

The problem for the Lakers front office is clear. Through a season filled with injuries and a "mid-season early-season" swap of Mikes, the story is the Lakers played well after the All-Star break. They got back on track and looked better than they did to open the season, which wasn't a huge bar to clear. Howard's health improved dramatically. They finally had both Steves. Pau Gasol eventually crept back into the lineup and helped cap off their strong finish. Things were in working shape

But how much better did they play? Take the win-loss increase away, look at the numbers, and there doesn't appear to be much of a difference. In fact, the uptick was not an empowered defense but a slightly-worse defense boosted by a mildly-better offense:

By the numbers the largest leap is on offense where the Lakers averaged 2.1 points more every 100 possessions. The defense allowed .6 more points per 100 possessions, but who's counting, right? They played better. The remaining numbers look by and large the same. There are small percentage changes, but nothing that seems to correlate to the drastic shift in their results.

So the Lakers won games. Post All-Star break the Lakers finished the season 20-8. Through the first 54 games they were only 25-29. They burst back into the playoffs after looking like they'd miss entirely. You remember those games though, right? The comebacks -- how Kobe Bryant hit an assortment of insane shots in multiple games to keep the Lakers floating, played nearly 48 minutes a game, and also had the help of the infamous New Orleans Hornets' botching of an inbound play along the way.

Little things went the Lakers way in that second half. A few wins were considered miraculous finishes. But was there improvement on a team level? Without the overblown crutch that the Lakers played better after the All-Star break it's a fair question, and one that Howard has clearly considered if the report is accurate.

The Lakers did this to themselves, though. Signing D'Antoni to a three-year guaranteed deal was giving a big window to a man with very little space to nurture giant expectations. The glass has officially shattered -- the shark outgrowing the small tank the Lakers needed to contain it in.

Howard is 27 now, and if he does sign the five-year max with the Lakers he will be 32 by the time his contract expires. Beyond his prime as a big man who's defensive impact is based on his athleticism and quickness, and may or may not have developed a post move repertoire. Not a good spot for Howard to be once he reaches his next free agency period.

If the Lakers weren't feeling pressure before, Howard has them by the jugular now. Not only will he consider other teams, but has also made his stance regarding D'Antoni clear. Take Howard out of the situation, though, and the Lakers still had to consider their coaching situation, right?

The question becomes what's next for the Lakers. Multiple coaches are already lining up interviews, have already been inked to new deals, or appear to be off the market. Can the Lakers afford to wait much longer as the candidate pool shrinks? More importantly, can the Lakers afford to make their five-year pitch to Howard while D'Antoni is still slated to be the head coach?

Dwight Howard has every right to question his future, and the Lakers' future, under Mike D'Antoni. Just ask yourself how many times you've questioned the pairing before indicting Dwight for doing the same.