Dwight Howard's free agency is a blessing in disguise

Dwight Howard's free agency will hold the NBA hostage through the Summer. Despite the chance that he can leave the Lakers without any return, letting Howard decide what he wants to do is the best thing that can happen for both him and L.A.

Share All sharing options for: Dwight Howard's free agency is a blessing in disguise

Dwight Howard will finally be a free agent July 1. After a few years of breaking up, then making up, with the Orlando Magic front office he was finally sent out of Florida and into Los Angeles, becoming a Laker. Howard joined a star-studded lineup featuring Kobe Bryant, Pau Gasol, and Steve Nash.

They were going to pick and troll the entire league.

We all know how the season played out. Injuries stacked, expectations crumbled, and the Lakers were swept out of the first round of the NBA playoffs by the San Antonio Spurs. Nothing has changed since. Bryant continues to rehab his Achilles, and the Lakers front office continues to hold their collective breath as their two superstars' statuses remains in the air.

Howard's free agency is going to be the story over the Summer. The man can finally decide which uniform he wears for 82 games a season and however many playoff games his team will play in. Make no mistake, if the Lakers made the playoffs battered and broken with a less-than-100-percent Howard, wherever he goes will consistently be in the playoff mix. The reality of the situation, however, is that there's a distinct possibility it will not be in purple and gold.

Howard can do whatever he wants 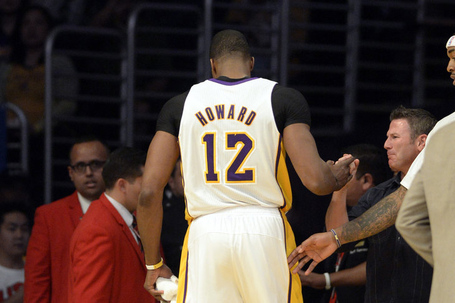 The centerpiece of all future plans for the Los Angeles Lakers can leave the franchise hanging and walk away for nothing. No matter what he does, it will be the best thing that can happen to the franchise.

There will be pressure from every direction for Howard to deal with once his contract expires. Just a quick glance at his Twitter mentions reveals the many sides of fandom. There are Lakers fans attacking Howard for disgracing Jerry Buss and the franchise's legacy. There are neutral fans who say they are interested with Howard joining the Rockets from a basketball perspective. This is after an early report from Ken Berger, before he is actually a free agent, indicating he is "intrigued" with teams besides the Lakers. He has yet to begin his free agency tour and there's already a frenzy.

He finally holds the power to decide his future after trying to force the Magic to trade him to a selection of teams he was interested in. No team can hold that over Howard now. During exit interviews he repeatedly dodged questions regarding his future and stated that he needed to take a step back to evaluate everything before making another commitment, to another franchise, for another X amount of years. No, he did not gush about staying with the Lakers. No, he did not indicate he wants to be a Laker for life. And, quite frankly, it's a good thing that he didn't.

This Summer could be the best thing that has happened to Howard on an individual level. For the last four years Howard has wanted to be somewhere else while trying to be the "good guy" with his current franchise. Eventually, Magic fans saw through it and by the end of the "Dwightmare" it was clearly time to move on. Sure, there were Magic fans who wanted Howard to stay, but he had to go. He wanted to go.

The "I love yous" are empty and full of resentment.

There's nothing worse than being in a relationship that isn't working. It's awkward. It's tedious. It's exhausting. The time you spend together is laborious, and all those words you want to say about how it isn't working out almost feel like they're dripping off your lips. The "I love yous" are empty and full of resentment. Perhaps not with the "other" person, but with yourself for not being able to break free from the ball and chain. Worse, if the other person isn't aware of your feelings they continue to invest into you. Continue to believe in you. Continue to build for you, around you.

Howard can't do that again. He ran his course with the Magic and made the mistake of letting false love extend his contract an extra year -- a year in which he played no games for the Magic in the end mind you. It was over, but he couldn't admit it.

Once Howard makes his decision there will be no questions left about his commitment. Either he will decide he wants to stay with the Lakers, or he will decide he is best served to play basketball elsewhere. Throughout the season one of the biggest questions, and stories, around the Lakers was how Howard was adjusting outside of Orlando. Did he almost come to blows with Kobe Bryant? Was he tired of Mike D'Antoni's "system"? Were his teammates fed up with his seemingly carefree attitude and demeanor? All of those little things will likely never come to light (until Mike D'Antoni decides he wants to write a book about one of the craziest years in Lakers history), but will certainly weigh in on Howard's decision to stay or go.

Howard is the Tyrannosaurus rex at the end of Jurassic Park battling the smaller, quicker, Velociraptors.

Will Howard's departure hurt the Lakers? Sure, but as C.A. Clark has already discussed, either way the Lakers are preparing to move forward. Despite whatever shortcoming may have felt apparent through the season Howard remains as one of the few big men who can survive in an NBA that is rapidly shifting to make the big man in the post an extinct species. Howard is the Tyrannosaurus rex at the end of Jurassic Park battling the smaller, quicker, Velociraptors.

What I'm getting at is this: Howard deserves a chance to make a decision on his own, without outside influence. Whether he decides the long term appeal of being a Laker is what he wants or not, there's no reason for him to be the face of the franchise if he isn't sure he even wants to wear the uniform. These are things that Howard must sort through before making another commitment. These are things to consider before throwing Howard under the bus for contemplating all of his options and carefully avoiding the kind of false promises he spewed in Orlando before finally being traded.

It goes back to the old saying: If you love her, let her go. The Lakers have been forced let go of Howard. If he comes back, great. The Lakers have a dominant center that they can build around over the next few years. If not? At least the purple and gold won't be stuck in a relationship where Howard constantly checks out other teams and wonders "what if". That "what if" can turn into a "this isn't working out" in the blink of an eye if he isn't invested.