Video breakdown: Spurs gambled in game one and it paid off

The Spurs dared the Lakers to beat them on the perimeter and packed the paint. The Lakers will need to take advantage of the many open looks the Spurs gave up, or San Antonio will continue throwing the house at Howard in the post.

Share All sharing options for: Video breakdown: Spurs gambled in game one and it paid off

The Los Angeles Lakers spent game one having their offense dictated by the San Antonio Spurs because they were unable to put together an semblance of what can be considered a "perimeter threat". Even with Steve Nash back in the fold the Lakers lacked any pressure from beyond the arc or even at mid-range. Nash ended the night going 6-of-15 from the floor and looking every bit out of sync. 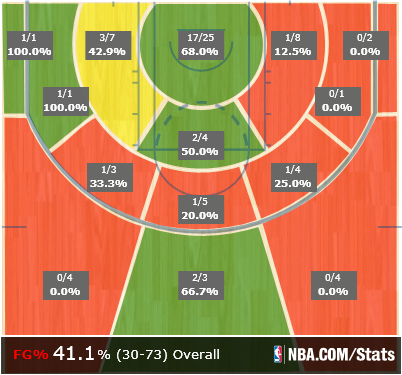 The Spurs were able to send extra defenders to the post to pester Dwight Howard throughout the night. Howard had to constantly be aware of extra defenders swiping at the ball as he attempted to work in the post, and for a player who already lacks natural fluidity in the area, it looked like a draining experience. Howard finished with 20 points on 8-of-12 shooting, but not due to a lack of defense from San Antonio in that area. They played Howard aggressively, making him work just to establish position on the block.

From anywhere but the post, though, the Lakers had plenty of open looks that they didn't connect on. The Spurs didn't just give up gimmes to Nash, but they also let Pau Gasol take mid-range jumpers without worrying much about it. The 4-5 pick and roll that often gives Howard a good inside seal was nullified with two defenders, which left Gasol at the elbow to take an open shot.

The Spurs got away with sending their defense in to pack the paint in game one, and if the Lakers continue their shaky shooting from the perimeter, expect more of the same in game two and the remainder of the series.