A look back at the three games the Lakers and Spurs played against one another through the season, and a handful of season-series stats.

The Los Angeles Lakers and San Antonio Spurs will begin their first round playoff series on Sunday in San Antonio. The last time the teams linked up for a playoff series was during the 2008 NBA playoffs in the Western Conference finals. The Lakers would go on to take the series 4-1, losing only game three in San Antonio.

Alas, we don't need to go back to 2008 though, as the teams have played as recently as April 14, where the Lakers secured a victory as they made their final push for the playoffs. Eventually, winning the final two games of their season led to L.A. moving up to the seventh seed, and they've now drawn the Spurs.

The teams played three times through the 2012-2013 NBA season with the Spurs leading the series 2-1. Here's a recap of the season-series between the teams.

The Bernie Bickerstaff era has likely come to an end, naturally, on a game that was decided by a Pau Gasol three point attempt with the just over 9 seconds left in the game. Somewhere, Andrew Bynum raises his glass and picks his afro out to the effort from his former front court mate. After the San Antonio Spurs clawed back into the game, and into the lead with a Danny Green three over the outstretched arm of a late rotating Kobe Bryant, the Lakers failed to execute with the game on the line and fall to the Spurs for their fifth loss on the year. Final score, Spurs 84 Lakers 82.

In the first game between the teams in the series the Spurs put the only blemish on the Bernie Bickerstaff "era" with the narrow victory. This game also served as the first start in Darius Morris' career, and he did a commendable job sticking with Tony Parker throughout the night. The game came down to the final shot after Danny Green drained a three to put the Spurs ahead, but the Lakers failed to deliver. Their last attempt at taking the game was a three-point field goal from Pau Gasol. No bueno. Here's the video of Green's game-winner.

Then, the frantic end. Every Lakers game needs a frantic end nowadays, it's just the way it works. We know the script here, the Lakers turn a 10 point deficit throughout the game into 5. Maybe 4 even if things go exceptionally well. But something funny happened this time around, they brought it within 3 with a minute left as San Antonio began to meltdown in front of our eyes. Up the roller coaster of hope we went. So close we could pull the clouds right out of the sky itself.

The Spurs slipped through the Lakers figurative fingers yet again in the second game. There was a certain infamous article criticizing Kobe Bryant's defense that stemmed from this game, featuring this doozy: 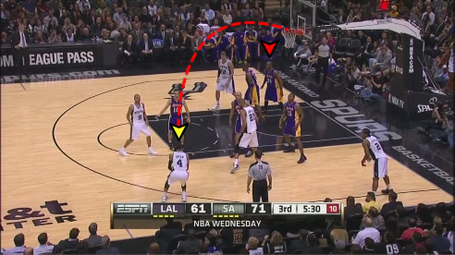 Still, the Lakers were missing Pau Gasol, Dwight Howard, and Jordan Hill in this game yet managed to keep it competitive while starting Robert Sacre at center. It has been quite a season, hasn't it? This game also served as Earl Clark's coming out party as he scored 22 points, grabbed 13 rebounds, and also had three assists.

Dwight Howard was the beast we thought we'd have all season, going berserk with speed and power in the post, sinking enough of his free throws to not be a complete liability, changing shots on the defensive end and cleaning the glass at every opportunity. Dwight ended up with a beastly 26 points, 17 rebounds and 3 blocks. But Dwight wasn't the only one to assume the mantle of leadership and shine on the night. The other bright spot was a bit more ... unexpected.

And the last, and much more relevant game, served as the Lakers only win over the Spurs through the season. This was the first game that the Lakers played since the Achilles injury to Bryant, and they responded by serving up a two-course meal featuring Steve Blake dropping 23 points while Howard put in 26 points and 17 rebounds. His defensive work was fantastic, but it was his evisceration of Tim Duncan in the post that showed the key in the Lakers finding an offensive identity.

The "relevancy" of this game is simple: the other two games were with Bryant.

Stats from the season series

*Parker has not attempted a three-point field goal attempt against L.A. 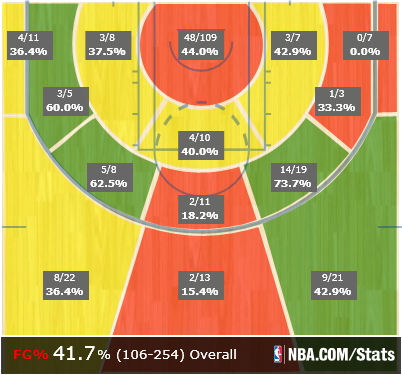 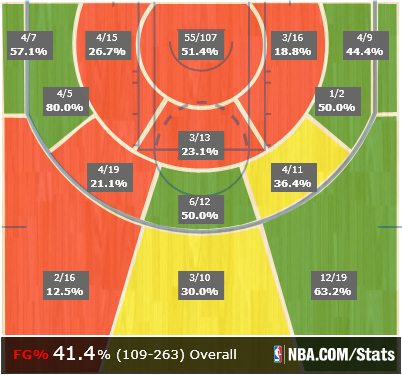